Every year, Santa Barbara Theatre produces Leonard Bernstein’s “Peter Pan.”  This year, instead of renting the costume for Nana, the nursemaid dog, the company decided to have one made to keep in their stock.  They had seen the pictures from Hansel and Gretel on the Utah Opera Costume Rentals website, and found that the animals the costume shop created for that show were the same style they were looking for: cartoonish and yet believable, so they called Rose Brown, Utah Opera’s Costume Director about commissioning the dog costume.
“Nana” is described as a Newfoundland dog in the original story, but with the approval of Santa Barbara Theatre and Rose, Carmen Killam (Milliner and Crafts Supervisor) and Ken Burrell (Cutter/Draper) used a St. Bernard as their inspiration, as they felt the coloring would be better for stage purposes.  After all was decided, Carmen and Ken set to work creating a functionally artistic costume. 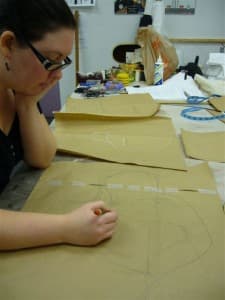 In order to create the head of “Nana,” Carmen first found as many pictures of St. Bernards from as many different angles and with as many expressions as she could.  Next, she drew out a profile of the dog to easier adjust it to fit a human head, and also to use as a guideline once she started carving the foam.  It ended up needing to be even bigger than she had originally drawn it, so she scanned the drawing and asked Jared Porter (Technical Director for Utah Opera) to help her scale it up in AutoCad.
To make the mold, Carmen cut slabs of foam that would be glued together to form a cube.  Once the block of foam was solid and the glue was dry, she traced the re-sized profile onto the block.  She found she would need to take a lot of foam off the block before she could get to the detailing, so she used a hot knife to slice strategic chunks of it away.  Then, using sand paper and rasps, she started the arduous process of smoothing and detailing that subtractive sculpting requires. 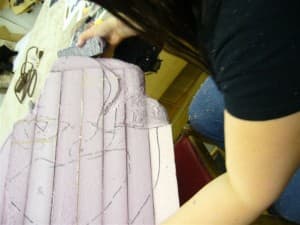 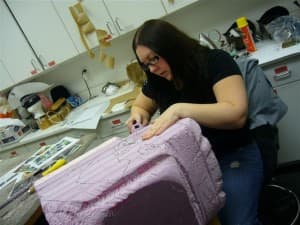 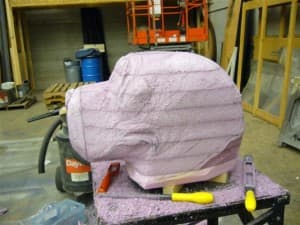 Carmen found it helpful to have other sets of eyes to stand back with her and look at the mold taking shape.  Other people, she explains, might see something that she missed or that needs to be altered or fixed.  Kelly Nickle (Prop Master), Lane Mortimer (Assistant Prop Master) and Jared Porter, were all extremely helpful with this step.  They were also good to share ideas with and helped with problem solving. 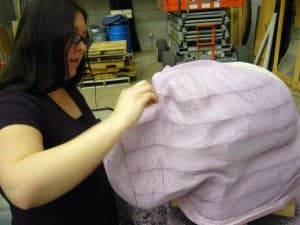 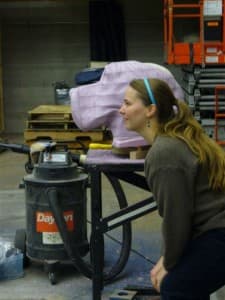 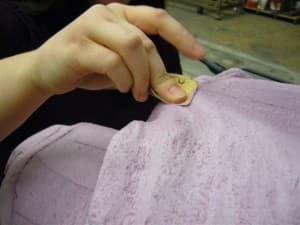 Once the “Nana” head was carved, it was covered with aluminum foil to protect it as she molded Veraform (a wide mesh-like thermoplastic activated by heat) over the head mold.  After taking the shaped Veraform off the mold, Carmen painted the eye and nose areas to help indicate where to leave blank, and where to put fur. 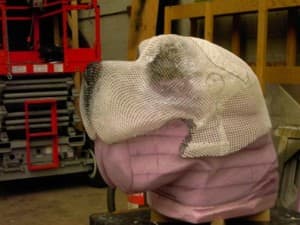 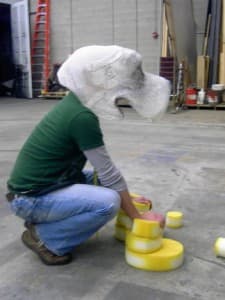 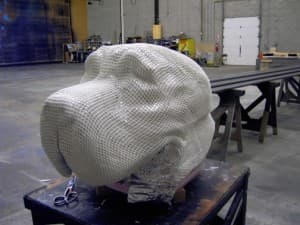 Next Carmen had to figure out where to attach a skull cap within the dog head so it would fit comfortably on the performer’s head.  Ken kindly agreed to be the model, and it was discovered that in order to keep the head level while it is worn, a foam pad needed to be added on top of the skull cap to raise the dog head up a bit.  The jowls and ears are separate pieces from the head base, which helps with the movement and believability. 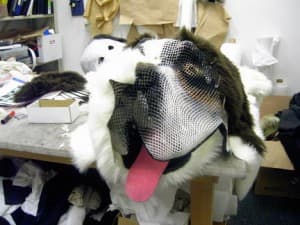 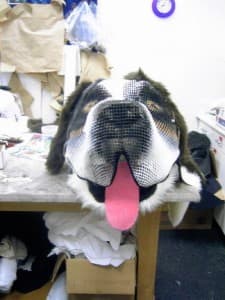 Carmen used a combination of her patterning and draping skills to cover the head with fur.  It is a tedious process, making sure the fur is going in the right direction and then stitching it to the head. 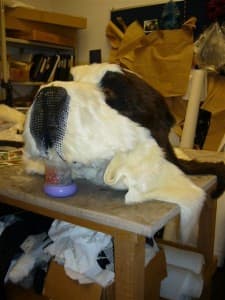 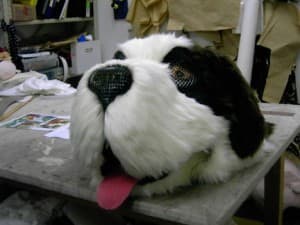 Meanwhile, Ken used foam and lycra to create a base body form which would be worn by the actor to pad his or her body to help give a better illusion of having a dog body.  He then made a fur suit that is worn over the base, complete with a tail that is attached to a belt inside the fur suit around the waist of the actor.  Ken even made and covered front and hind paws, building up the front paws so that when the performer is down on all fours, both sets of “legs” are the same length.
When put together, the ensemble creates a believable and interesting costume that will doubtlessly be impressive and interesting onstage. 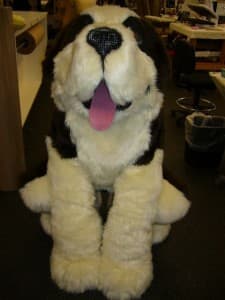 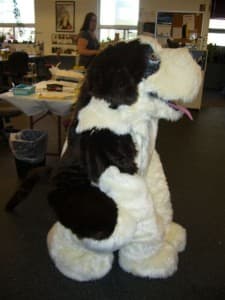