This week I sat down with the Set and Costume Designer for our production of Strauss’ Salome, Vita Tzykun. Vita shared some of the symbolism from Salome that inspired her designs:
“The opera Salome is very symbolic and it’s anything but realistic, and one of the biggest symbols is the moon. Everybody, every character, has a different take on the moon and its paleness. To some Salome is the pale virgin that looks like the moon. For some the moon is pale like death. It’s all about perspective, so it becomes a very ambiguous symbol. The moon is also a very feminine symbol, so that’s why we decided to feature it in the set design.
“In addition to the moon, there are seven spheres that represent the seven phases of the moon that will participate in the dance of the seven veils. Our version of the dance will be much more symbolic so at the beginning of the dance the moons will descend and align between Salome and Herod. One moon at a time will rise, clearing a path between the characters from the most enclosed new moon, to the most open full moon as the tension and passion from Herod grows. These moons will emit more and more light. As she gets closest to him that last moon sphere will emit the most light when Herod is the most passionate and willing to give Salome anything she wants. We figured it would be more effective storytelling than simply removing layers of fabric.* 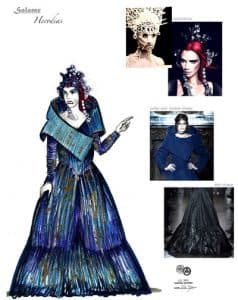 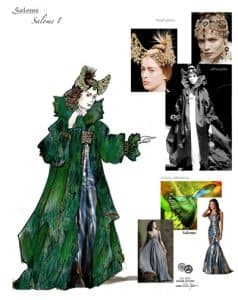 “With costuming we wanted to differentiate between Jochanaan, who is the only real man, and all the other characters, who are very artificial. Because they live within so much opulence and they are so engulfed in pagan rituals and beliefs they remove themselves from humanity. To show that, we really wanted to give them a very stylized and unnatural look. So the costumes are going to be very sculptural and include many geometric forms. To contrast, Jochanaan will have linen and cotton clothes that are simple and torn and he will be barefoot. He’s the only pure soul among the rest of them. The designing was done thinking through texture and color and shape, rather than referring to a specific time period. We wanted to really communicate ideas and concepts rather than set the look in a particular year because in this story it’s not important because it’s a metaphoric fable.
“One of the elements I’m very excited for is the cistern where Jochanaan is kept. In all the productions of Salome you can never see him, because the cistern is hidden beneath the stage or behind the set. We were interested in going deeper and being able to see him imprisoned the entire time. In a traditional retelling you only see him twice, even though he central to the whole story. So the cistern is at stage level but behind a translucent scrim, so you can experience his claustrophobia and see his suffering throughout the entire show. We also add more tension because Salome and Jochanaan can stand next to each other with only a thin piece of scrim separating them on stage, but we’ll still see that they’re in two completely different words and he’s untouchable to her. It’s going to be exciting and refreshing.”

* Just a fun historic footnote – Strauss said this about the Dance of the Seven Veils: “I would rather not have any dramatics in the dance at all. No flirting with Herod, no playing to Jochanann’s cistern, only a moment’s pause beside the cistern on the final trill. The dance should be purely oriental, as serious and measured as possible, and thoroughly decent, as if it was being done on a prayer-mat…I have only once seen the dance done really aristocratically and stylishly…”