Character types in Abduction: A Primer for Mozart’s Later Operas

Today, with the benefit of two centuries of hindsight, we are able to see precisely how important Abduction from the Seraglio was to the development of Mozart’s operatic style.  Here he had the chance to explore so many different character types.  In fact, there is a greater variety of social classes and character types in Abduction than in perhaps any of Mozart’s later operas, with the possible exception of Magic Flute.  And with the freedom afforded the composer by working in the populist genre of the Singspiel, he was able to experiment, explore, and display his already-extensive mastery of song and aria styles in the musical characterizations.

Although the Pasha Selim is a speaking role, the character type is an important precursor to Sarastro in Magic Flute.  Exotic (Sarastro is probably Egyptian), powerful, seemingly threatening at first, accused (and guilty) of kidnapping the heroine, but all-wise and gracious at the end, Selim inhabits the same cultural and political space as Sarastro.  In both characters we see the embodiment of personal integrity in a specifically Enlightenment, non-Christian figure, supporting the 18th-century belief that Western Europe held no moral high ground at all when it came to nobility and integrity.

The foil for the Pasha is Belmonte, the standard tenor-hero who must rescue his beloved from danger.  In this regard, the character of Belmonte is Mozart’s trial run for Tamino from Magic Flute.  Belmonte, like Tamino, begins the opera by stumbling into a foreign land, and must contend with different challenges, cultures and philosophies on his path to personal redemption and true freedom, with his beloved at his side.  Like Tamino, Belmonte comes from a noble family, but there the paths diverge.  While Tamino is actually “unschuldig, weise, fromm” (“innocent, wise, pious”) from the beginning, and remains so throughout Magic Flute, Belmonte needs to be taught about forgiveness, true nobility (not the kind of assumed “nobility” of the aristocracy), and integrity.  Belmonte is not a bad person by any stretch, but he is even more naïve than Tamino at the start, and only when pressed in Act III does he discover the force of his love, the need for humility, and his inner strength of character.  Belmonte’s opening arioso and the later aria “Konstanze, Konstanze” are both lyrical and heartfelt—obvious antecedents of Tamino’s “Dies Bildness” from Magic Flute.

Belmonte was an even more crucial trial-run for Tamino because Mozart had so few tenor heroes to draw from in the interim.  In his famous Italian operas with the librettist Lorenzo da Ponte—The Marriage of Figaro, Don Giovanni, and Così fan tutte—the male leads are either bass/baritones, dull, inept, immoral, or duplicitous, or some combination of those traits. 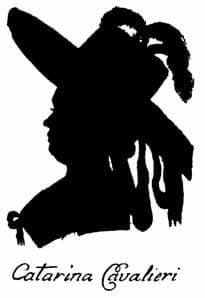 For the character of Konstanze, Mozart wrote some of his most virtuosic and elaborate operatic music.  The significance of the name Konstanze was not lost on Mozart—she represents fidelity in the opera—but it was also the given name of his fiancée, Constanze Weber, whom he would marry (against his father’s wishes) two weeks after Abduction from the Seraglio premiered in Vienna.  That Constazne Weber was also a talented soprano must have played on Mozart’s imagination and inspiration, too.  The following year he wrote the difficult solo soprano parts of his “Great” Mass in C minor for his wife to sing.  So even though the role of Konstanze in Abduction was conceived especially for Caterina Cavalieri, one of the leading opera divas of the day, Mozart was also probably influenced by his wife’s voice in writing the music for Konstanze.

Her most famous aria is the long and virtuosic “Martern aller Arten,” which is preceded by a lengthy accompanied recitative.  It is a tour de force of the soprano repertory in which Konstanze displays a range of conflicting emotions as she steels her resolve.  And yet her vocal lines, with their wide range, rapid shifts of Affekt, long melismas and fioritura, sound uncomfortably similar to the Queen of the Night’s first aria from Magic Flute.

How could this be, given that Konstanze is a sympathetic character and the Queen of the Night is ludicrous, if not outright evil?

Perhaps Mozart intends us to regard Konstanze as “nobility” as well.  No obvious mention is made of her social status in the opera, and yet she is the beloved of a member of a powerful and well-regarded family.  And she acts at all times with the grace and dignity expected of the aristocracy.  Mozart’s sophisticated music for Konstanze rounds out this incomplete picture of her character.  And in that regard, Konstanze shares some degree of social standing with the Queen of the Night.  The Queen, in Act I of Magic Flute, is also trying to give an impression of nobility and sincerity in a situation in which she also feels genuinely wronged, so it’s not surprising that her music shares traits with Konstanze’s. Much of our mistrust of the Queen of the Night comes from what happens later in Magic Flute, or through production or acting decisions in Act I that are independent of Mozart’s music.  But there is also an element of parody in the Queen of the Night’s music; she pretends to display, through similar musical styles, the integrity and constancy of heart that Konstanze actually displays.

With her faithful heart and true nobility of character, Konstanze also prefigures Pamina from Magic Flute, with her aria “Welcher wechsel” manifesting all the yearning and poignancy of Pamina’s “Ach, ich fühl’s.”  Given that the Queen of the Night and Pamina are mother and daughter—both noble and passionate in their own ways—it’s fitting that their common operatic ancestor, Konstanze¸ should be the original source for both of their musical styles.

Again, the intervening Italian operas didn’t give Mozart much opportunity to develop a female heroine from the upper classes.  Susanna from The Marriage of Figaro is necessarily low-born—one of the major points of that opera’s plot—and while she is undoubtedly smart and clever, her music doesn’t exhibit the traditional, almost baroque virtuosity of strong, female, upper-class characters.  The Countess from Figaro, and Donna Anna and Donna Elvira from Don Giovanni, are all victims of their high-born male partners rather than active heroines.  And Fiordiligi and Dorabella from Così fan tutte, though nominally from the “nobility,” aren’t anywhere near as faithful to their loves as Konstanze is, and that’s the whole point of that opera! 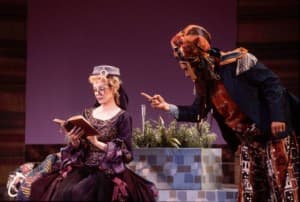 The polar opposite of Konstanze is Osmin.  He is at the contrasting end of the vocal range, and is unlike Konstanze in almost every conceivable way: gender, culture, politics, character, behavior.  Osmin’s music is also correspondingly simple.  His melodies are mostly triadic, in duple time, in the minor mode (remember that Konstanze’s biggest aria, which is about torture, remains optimistically in the major mode throughout!), rhythmically simple, declamatory, and perhaps a little doltish in keeping with his character.  There isn’t an exact parallel of Osmin in Mozart’s later operas, not even Magic Flute.  And yet his narrow-minded focus on women and wine suggests a bit of Papageno.  His function as a keeper of prisoners, and his exoticism and frustrated sexual licentiousness allude to Monostatos.  His voice range, and his deference to a more powerful master prefigure Leporello, Don Giovanni’s servant (who also sings simple, declamatory songs suited to his lower social standing and plainness of character.)  And in his aria “Solche hergelauf’ne Laffen,” the stern Osmin pledges revenge in a manner decidedly similar to Bartolo’s “La Vendetta” from The Marriage of Figaro.

The secondary couple, Pedrillo and Blonde, share musical similarities with Belmonte and Konstanze, though somewhat diluted.  They form a tenor/soprano pair, like the lead couple, which confirms that they are a direct parallel, and yet more given to compromise than their socially-elevated counterparts.  Blonde’s aria “Durch Zärtlichkeit” is not as technically difficult as Konstanze’s aria later in the same act because, unlike Konstanze, Blonde might indeed be won over by tenderness and affection.  Hers is not so much a distinction in social standing as it is in personal character.  Similarly, Pedrillo is obviously Belmonte’s social inferior, and lacks the constancy and nobility of both Belmonte and Konstanze (demonstrated in his decidedly lily-livered “Frisch zum Kapmfe”), and yet as a tenor role his part is somewhat heroic.  He has, after all, won the favor of the Pasha, and is a vital participant in the scheme to recapture the women from the seraglio.  He’s not a “servant” as much as an unwilling hero, but certainly more heroic than, say, Leporello or Papageno, both of whom are willing to settle for lesser rewards.

Occasionally Abduction from the Seraglio is relegated by music historians to a minor position as one of Mozart’s lesser operas, or late juvenilia.  But it clearly was a breakthrough work for the composer.  Not only is it important—and eminently enjoyable!—in its own right, it was the foundation on which the ongoing genius of Mozartian opera was built.

Tags
abduction| abduction from the seraglio|