Enlightenment Europe in the 18th century seemed captivated by exotic cultures, a fascination expressed in its literature, art, design, and even music.  As the Christian church began to lose its monopoly on the minds of intellectuals and artists, the cultures of non-Western lands became a new source of inspiration by introducing alternate ways of thought.  Fostering knowledge of far-flung traditions was another way of bringing Western Europe out of darkness and into the light of understanding that the Enlightenment promoted.  And Orientalism, as a scholarly undertaking in the 18thcentury, encouraged the sympathetic study of these unfamiliar lands.

This fascination with non-European cultures was in some respects generalized: China, Egypt, India, and so on were all ripe topics. But for the Viennese, whose city was almost taken by the Ottomans in 1683, Turkey represented one of the most formidable, dangerous, yet simultaneously alluring of all the exotic “others.”

The music of Turkey had already flavored numerous mid-century operas, ballets, and theatrical works.  One of Gluck’s French opéra-comiques, La rencontre imprévue (or Die Pilger von Mekka)includes Turkish elements in its story, as well as a character named Osmin.  First performed in 1766, this opera was then given new music by Haydn and performed in Vienna in 1775.  Gluck’s original version was revived in Vienna in 1780, and was likely an influence on Stephanie’s and Mozart’s decision to write their own “Turkish” opera.

In Voltaire’s Candide, the protagonist and his friends settle down to a very civilized, simple life in Turkey, after accepting the wisdom of the Old Turk to “cultivate their garden.”  Even though the Turkish threat was still very real in Mozart’s time—Turkish pirates were reportedly still prowling the Mediterranean and taking European slaves as cargo—the theme of capture by Turkish Muslims was common in stage comedies and dramas throughout the late 18th century. 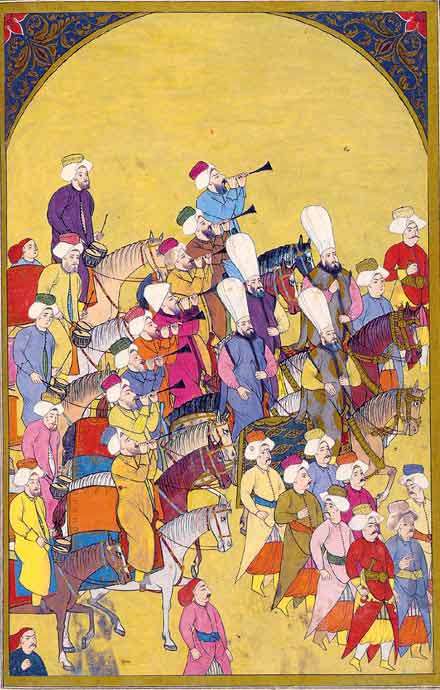 The easiest way of culturally invoking Turkey in music was through imitations of what has become known as Janissary music.  The Janissaries were an elite military unit in the Turkish army, with an accompanying band that included a number of unpitched percussion instruments, especially bells and drums.  (Significantly, in the context of Abduction, the Janissaries were historically chosen from among Christian slaves.)  It was these instruments that contributed to Turkish music’s unique sound.  Through the 18th century, as Western musicians attempted to invoke the exotic colors of Turkish Janissary music, they started to incorporate instruments like the triangle, bells, bass drum, and cymbals into the ensembles.  The bright jangling and thumping of these percussion instruments were novel sounds in the standard Viennese orchestra, and easily connoted the Near East to Western audiences.  (Previous to this, the only percussion used in an 18th-century orchestra would have been timpani, which were tuned, and usually considered part of the brass family in military-themed music.)  But it is also expressed in obsessively repeated rhythmic motifs, harmonic simplicity, duple time, rapid tempo, rising and falling thirds in rapid succession, and general loudness.

Turkey was very much in fashion at the time.  The delightful movie Amadeus includes a scene in which a leading opera diva, Caterina Cavalieri, confides to Antonio Salieri, “My hairdresser tells me everything’s going to be Turkish this year!”  (The real Cavalieri in fact premiered the role of Konstanze in Abduction.)  But Mozart had already been dabbling with Turkey in his earlier music, as well.  His Zaide, the unfinished Singpspiel that had impressed Stephanie, is a rescue opera set in Turkey.

Mozart’s Violin Concerto No. 5, K. 219, was composed in 1775 with a Turkish passage in the Trio section of the last movement.  This passage is based on earlier ballet music he had written for his 1772 opera seria Lucio Silla in Milan in which the ballet section was titled “Le gelosie del seraglio” or ‘Jealousy in the Harem.”  This concerto is sometimes, therefore, referred to as Mozart’s “Turkish” Concerto.

The Turkish Trio starts at 3:47, with the orchestral strings using the backs of their bows (col legno) to give the impression of exotic percussion.  Although the melodic material is more likely Balkan or Hungarian here, the effect was definitely intended to be Turkish. Mozart, like many of his contemporaries, tended to conflate non-Western exotic influences at will.

And not too many years after finishing Abduction, Mozart composed his famous Rondo “Alla Turca” from the Piano Sonata No. 11 in A major.

In Mozart’s day, some pianos were fitted with a “percussion stop” that would actually play cymbals along with the piano part, making it even more “Turkish”-sounding!

Turkey continued to crop up in Mozart’s music after that, as well.  In the famous “Catalog” aria from Don Giovanni, Leporello informs the audience that the Don has been accumulating conquests in Turkey as well as in Western Europe.  In fact, the Don’s catalog might be considered a Western counterpart to the “harem’ or seraglio of the Near East—he simply collects his women consecutively rather than simultaneously.  Even Don Giovanni’s aria “Fin ch’han dal vino” has overt Turkish elements in it.

And although the character of Monostatos in The Magic Flute is not explicitly Turkish, he is intended to appear exotic, and his aria “Alles fühlt der Liebe Freuden” also includes Turkish elements.

The flavor of Turkish music suffuses much more of Mozart’s repertory than merely his “Turkish” opera and the overtly “alla turca” pieces.