The beautiful backdrops and scenery are two of my favorite parts of the experience at Utah Opera. Before I started working here, the anticipation to see the stage and costumes was perhaps greater than the anticipation of hearing great music and voices. Now, working here and being able to see how these stages are created has been eye opening. I never would have thought that so much had to go into the background.

The first step in this process has been refurbishing and rebuilding. Opera companies don’t always build their own sets for each opera (a safe, secure, well-built set can cost over $200,000). Instead, they rent them to other companies. The Utah Opera rents out complete sets for 24 different operas.

For Madame Butterfly, the set in circulation was outdated, so the Utah Opera has made the old one new again. Jared Porter, Jay Morris, and our crew of carpenters, welders and designers have spent over three months on the construction. The new production set (which can be easily divided into three pieces for shipping) can now be rented out to other opera companies performing Madame Butterfly. The difference is that the previous Madame Butterfly set was a called a “3-truck show” meaning it took 3 semi-trucks to haul everything. And now, because of the improvements the Utah Opera crew has done, it is a “1-truck show.” That translates to less expensive shipping and easier set up/tear down for other operas who want to rent it. 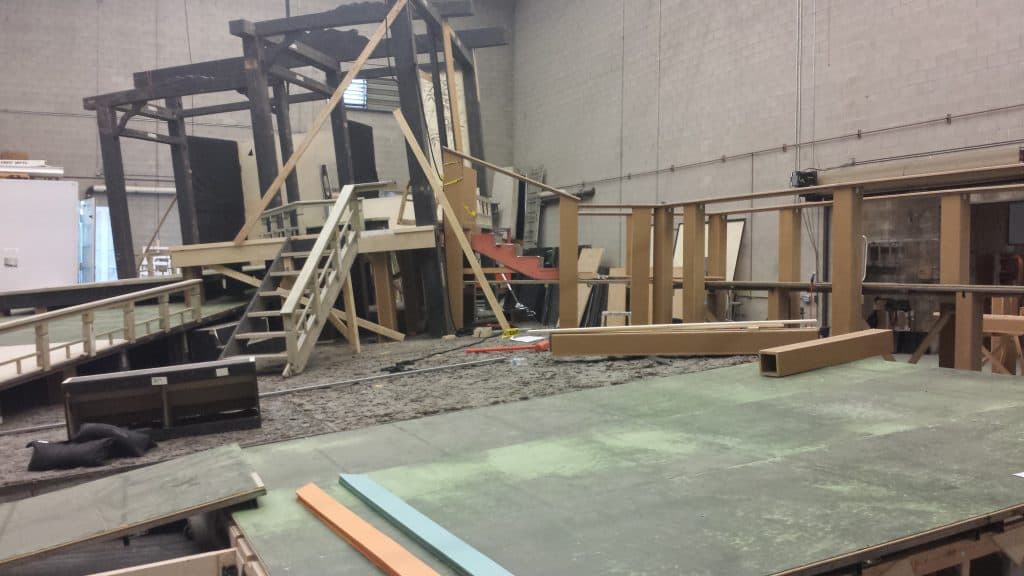 Also new for this show, the backdrop–the background that is usually a painted piece of canvas of scenery–is being made from scratch, painted by our very own John Cook.

The concept was to create a single backdrop that could be changed through lighting. So only a few colors were chosen. The colors will blend with each other, changing from sunrise to midday to sunset. With the newly refurbished set design, we will all be transported to Nagasaki, Japan during the early 1900s.

John never thought that he would be creating paintings on canvases so large. As a teenager, John used to take rounded river rocks and paint full landscapes on them with tiny paint brushes. “This is definitely different. It’s difficult to control.”

The first step in this process was to create smaller concept drawings of what the backdrop should look like.

This step took more than just paint on canvas though. With the help of lighting director Nick Cavallaro, they decided which version and which colors would be the best with the lighting effects they wanted to replicate. The preliminary planning and concept art took over three weeks to complete.

The next step was securing a canvas large enough to fit not only in the Janet Quinney Lawson Capitol Theatre but in other theaters as well since this entire set will be rented to other companies. Sometimes backdrops are made with multiple pieces of canvas, but for this one, the crew decided on one solid piece. It measures 36 feet by 60 feet!

And then came the hard part: painting a 36’ x 60’ canvas. John used a variety of techniques to create what he wanted (including brooms and really big paintbrushes). The following pictures show the canvas as the scene begins to take shape. 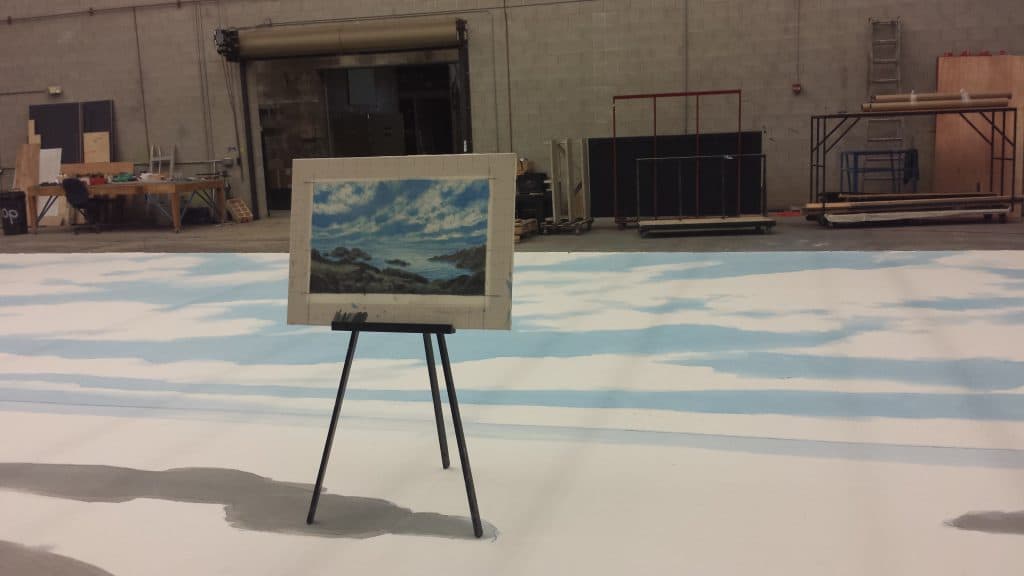 Using the concept drawing as a guide to paint the real thing. If you look closely, you can see John’s sketch lines.

The first thing John did was draw a rough sketch on the canvas to mark the ocean, the rocks, the trees, and the clouds. This drawing is temporary and eventually is covered by the paint. 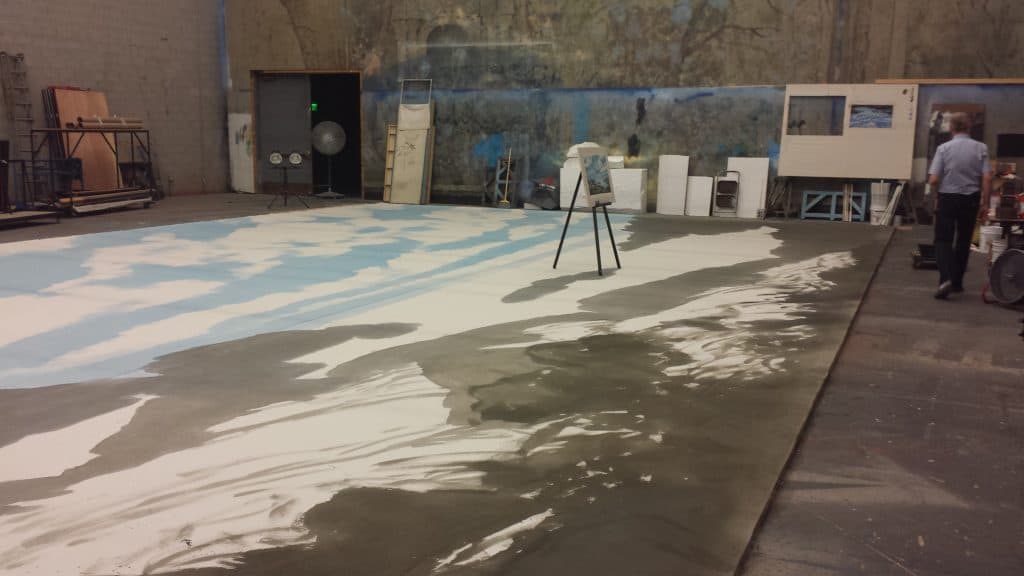 The first few layers of paint go down on canvas. 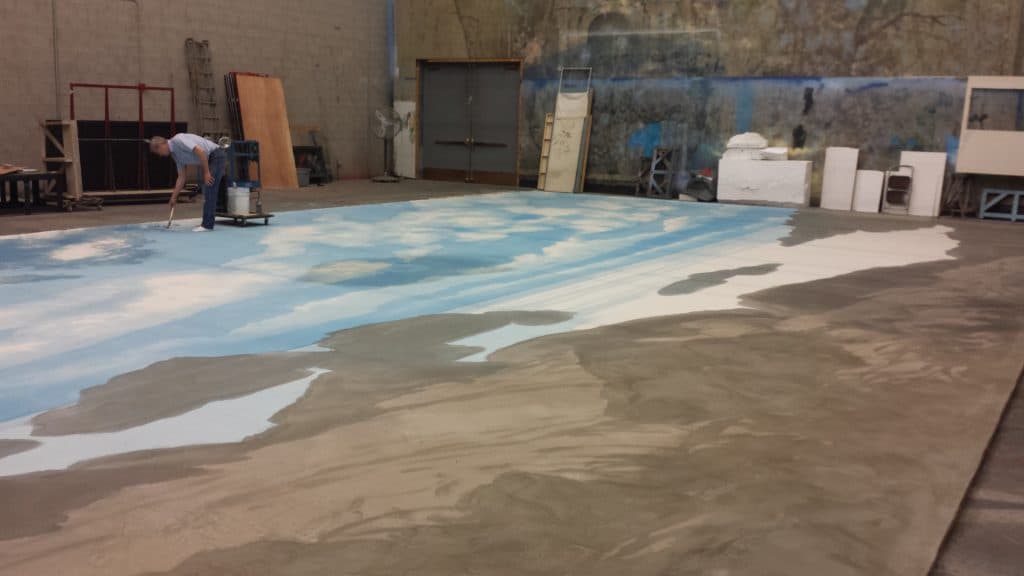 About 1/3 of the way done with sky, ocean and land taking shape.

Another concern was footprints. John kept a pair of slippers on the side of the canvas, and every time he had to walk to the middle, he took them off and walked over in his socks (after the paint had dried, of course).

John Cook painting in his socks.

Because a lot of the colors will come from lighting effects, John kept the painting itself rather simple. “I am only using one color of blue, Prussian blue. It’s the layers that make it look like there are more.” Each layer (so each time John paints a sections of the painting) takes about 4-6 hours to dry even with heavy duty drying machines blowing air above and below the canvas. The entire painting of the canvas took almost an entire month. 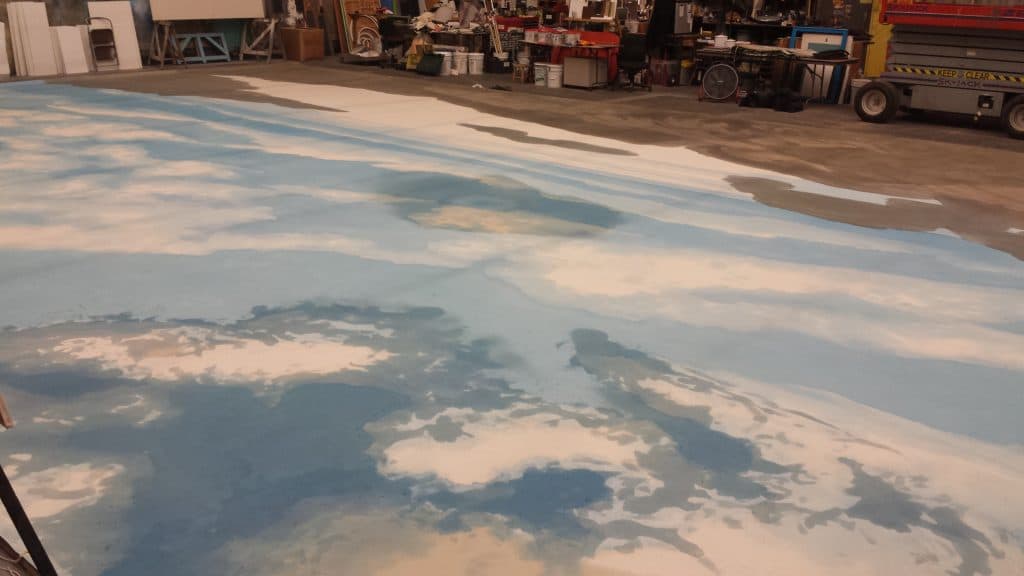 Wet Layers of paint need to dry before more color can be added to the canvas.

And since this is like a giant watercolor, like most watercolor paintings, once the color is on the canvas, it has a mind of its own. “The colors bleed into each other and form another layer of color and texture that I hadn’t planned, but it works,” John says. 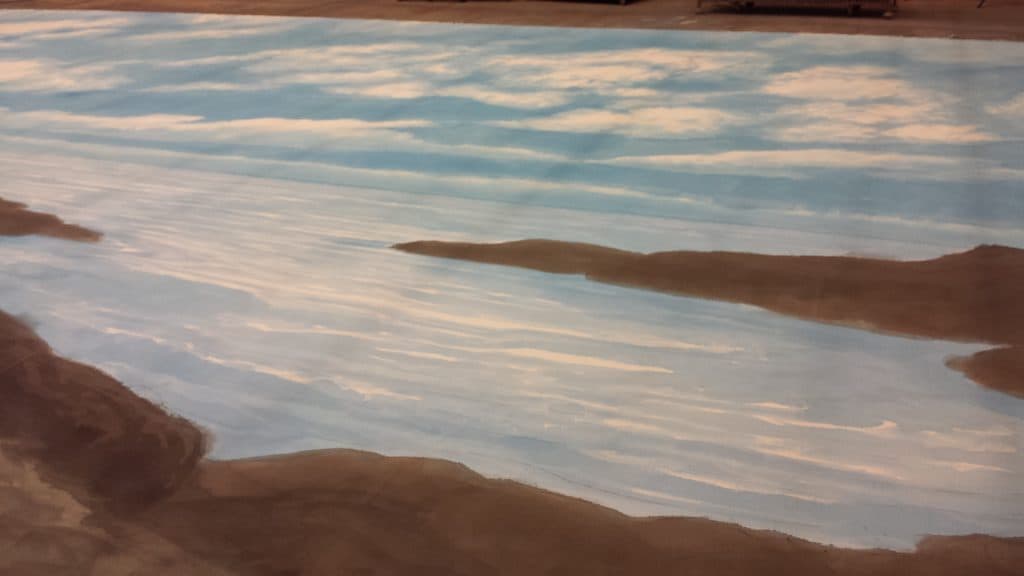 Close up of the ocean detail 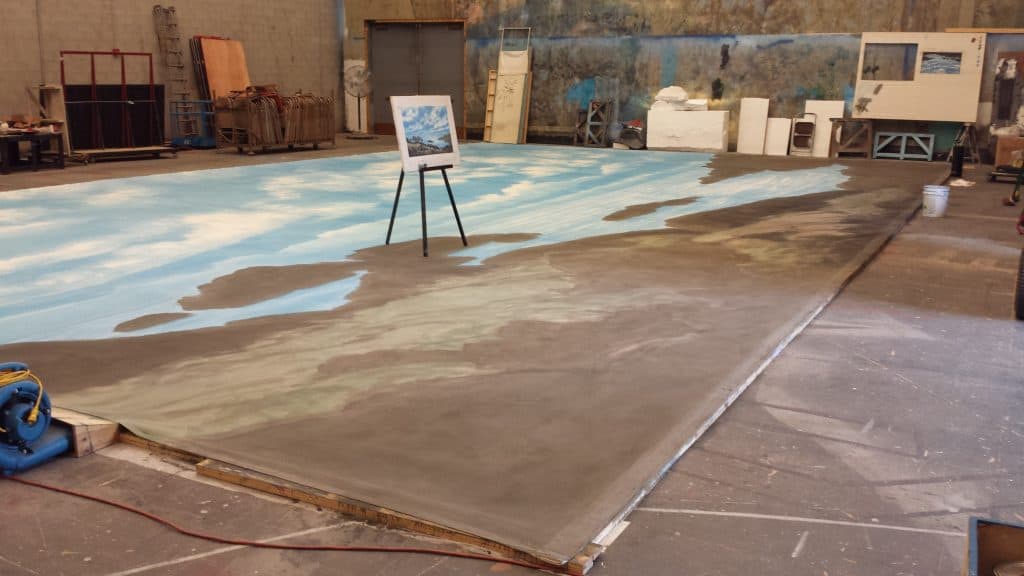 Some of the final layers of color, texture and paint.

These pictures only show part of the product. I unfortunately did not get to take a picture of the final painting. So just like all of you, to see it in its finished and beautiful form, I will have to come to the opera. I can’t wait!
~Traci Grant