In the early 1860s, Georges Bizet was a potential rising star of the Parisian music world. He had had a successful education at the Conservatoire de Paris, during which he made the acquaintance of Charles Gounod, and in 1857 won the coveted Prix de Rome award. As a part of his award, Bizet was given a five-year grant to compose in Rome but returned to Paris with two years remaining on his grant in order to tend to his ill mother. Once in Paris, he found that his previous successes did little to open doors of the Parisian music scene.
The Pearl Fishers’ initial production was the result a series of extremely fortuitous opportunities for the young Bizet. The two state-sponsored opera houses of Paris at the time, the Opéra de Paris and the Opéra-Comique, performed a repertoire of established operas by composers like Rossini and Meyerbeer and were resistant to new works even by well-known French composers. However, Bizet’s status as a recent Prix de Rome laureate opened the door to the Opéra-Comique as it was obligated to occasionally mount one-act operas by Prix de Rome winners. While Bizet was rehearsing his commission there, the now-lost opera La guzla de l’Emir, the offer to write a full opera for Cormon and Carré’s libretto for The Pearl Fishers came in from Léon Carvalho and the Théâtre-Lyrique. Under Carvalho, the Théâtre Lyrique became the central venue for staging new works by French composers. Carvahlo had been offered a large grant to produce a new full opera by a Prix de Rome winner and in turn offered Bizet the opportunity. Bizet accepted and withdrew La guzla de l’Emir from the Opéra-Comique, and parts of it were repurposed into The Pearl Fishers. 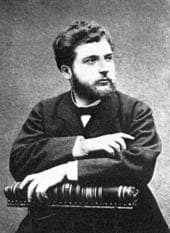