20th/21st century classical music audiences and critics place significant importance on the composer’s intentions and generally want to hear a work as the composer wanted it, but The Pearl Fishers exposes the limits of this endeavor. Opera in general is often a little problematic in this regard because scores were commonly altered and augmented by the composers or others in order to fix parts that flopped, pander to local tastes, and appease censors. Official vocal scores were usually produced in advance of the opening for promotional purposes, so they cannot be trusted to reflect any last-minute changes. Even under these circumstances, scholars can hopefully locate an autograph score or series of scores in the composer’s hand that can be taken to represent a finished and definitive version.

The Pearl Fishers presents a dilemma because there is no extant full score in Bizet’s hand, and some passages were only available in vocal score editions until very recently. The first run of late 19th-century revivals also changed the opera’s ending significantly, scrapping the original ending in which Zurga allows Leïla and Nadir to escape and replacing it with ones in which Zurga meets his end in various ways as punishment for defying the villagers. New music was interpolated into these scenes and later issued in subsequent editions used for performances through the 20th century.  It wasn’t until the 1970s that the opera was fully restored following the discovery of a conducting score in which Bizet had made indications for orchestrations.

That the ending of the opera has presented such trouble for 20th century productions seems appropriate, as it apparently was also a source of concern for the librettists Eugène Cormon and Michel Carré. Indeed, the whole libretto is widely thought to be one of the weakest in the current operatic repertoire. Boydon and Kimberley’s Rough Guide to Opera even goes so far as to claim that the opera’s appeal “depends…on the audience’s ability to ignore what the singers are singing about.” (309)  The plot almost seems as if the authors set up a standard love triangle with requisite conflicts between love and duty but then couldn’t figure out how to build the intensity to a satisfactory climax, much less resolve it in the end. To use a slight anachronism, it seems to have been “phoned in,” and apparently Cormon and Carré later were kind of embarrassed by it and wished they had done better for young Bizet. 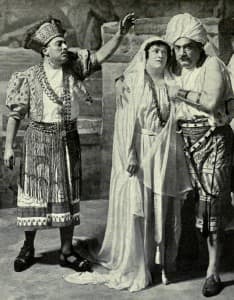 Caruso in The Pearl Fishers 1916

In terms of inspiration for the libretto, Cormon and Carré seem to have turned to recently published book on the island of Ceylon (Sri Lanka) and its “natural curiosities” as a way to breathe new life into a fairly standard exotic setting (Lacombe 107). They combined this with a plot drawn from Étienne de Jouy’s libretto for Gaspare Spotini’s 1807 opera La Vestale, a tragédie lyrique that centers on a Roman general named Licinius who returns from war to find that his girlfriend Julia has become a vestal virgin. He comes to her during her vigil over an eternal flame, which goes out while she is…distracted. Julia is sentenced to death but a thunderstorm gathers and lightning reignites the flame, so the High Priests release her and she and Licinius marry. Cormon and Carré even structured the overall drama of The Pearl Fishers on Jouy’s libretto, although they added the emphasis on the friendship between their two male leads and the ensuing love triangle with the chaste priestess (113).

Beyond the large-scale modelling on La Vestale, the individual scenes and characters of The Pearl Fishers tend to follow the conventions and frameworks of the time as well. To a modern reader, this possibly seems a bit lazy, but it is worth noting that opera production at the time was a practically industrialized show business machine, even without the strict expectations of the Parisian opera houses and audiences. It is hard to fault composers and librettists for making use of proven formulas under these circumstances, and just as with any other musical product the result would have to strike the right balance between novelty and familiarity in order to be successful. 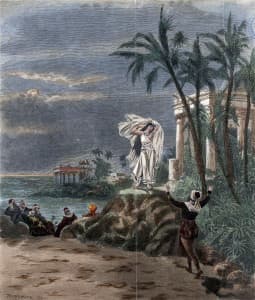 Returning to Bizet’s music, it also wasn’t particularly well-received by the critics of the time, even if audiences seemed to like it well enough. Hector Berlioz was one of the few supporters, possibly because he saw some of his own ideas at work within it. The Parisian critics in the 1860s had a particular distaste for musical ideas that seemed too harmonically adventurous or too enamored of musical conventions associated with Italy or Germany. In most cases, it was the shadow of the operatic titan Richard Wagner that critics seemed to despise the most, and The Pearl Fishers did not escape condemnation as being too influenced by Wagner’s musical ideas. Some critics did take account of Bizet’s youth, with one Marie Escudier noting that although the Wagnerian aspects of the music contributed to a “sense of weariness,” Bizet had likely adopted them out of “pedantry rather than conviction.” (Lacombe 75) He was, after all, still a young composer finding his voice, so perhaps the critic gave him a bit of a pass for choosing the “incorrect” path. 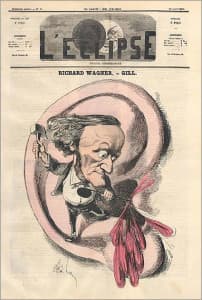 However, it is worth noting that the accusations of Wagnerian influence in The Pearl Fishers and other works often relied on very thin evidence, and critics often had little to say in terms of specific details. For example, although The Pearl Fishers uses the melody of the Nadir-Zurga duet eight times over the course of the opera, the critics seemed not to connect this with Wagner’s similar use of leitmotif in his operas. (Lacombe 77) Additionally, Parisian audiences and critics of the time had little exposure to Wagner’s actual music, and instead referred to Wagner’s writings or simply parroted the things that other critics had written about his music. Wagner then became a sort of effigy for any music deemed to be overly complex and dissonant in its harmonies, lacking proper emphasis on melody, and/or simply too enamored of its own profundity. An actual connection to Wagner’s music was not required, and indeed the critic Jules Ruelle complained that invoking Wagner was simply a cynical way for writers on music to lend authority to their criticism. (77)

Of course, the dislike of the Wagnerian ideal was only partly a matter of aesthetics; there was a significant nationalistic and even partially personal vendetta involving Wagner and the Parisian operatic circle. Naturally, Paris looked to maintain its own operatic traditions and ideals against the influences of Italian and German opera, and one of the easiest ways to do so was to remain vigilant against foreign influence. However, for Parisian critics Wagner also represented a lack of respect for the traditions of the Parisian opera dating back to an 1861 performance of his opera Tannhäuser. Wagner refused to bend to the demands of the Parisian stage, and his most egregious offense was not inserting a ballet into the second act and so angering the members of the elite class who wanted to admire their ballerina protégées. The tumult was enough that the opera was withdrawn after three performances, and Wagner wrote a rather passive-aggressive open letter to the Opéra director in which he apologized that his work did not suit the audience. In true Richard Wagner fashion, he also didn’t make any friends by demanding more than 160 rehearsals and attempting to unseat the orchestra’s conductor in order to conduct the work himself. So in addition to breaking the musical codes of French opera, Wagner breached the proper social decorum for composers in Paris. (Lacombe 39-40) Additionally, the evangelical fanaticism and devotion of Wagner’s acolytes and fans and his growing dominance over the world of opera in Europe almost demanded opposition, even if resistance ultimately became futile by the 1890s.

The Pearl Fishers’ critical reception in more recent years has likewise been rather uneven, with some reviewers referring to it as a “one duet wonder” in reference to the popular tenor duet “Au fond du temple saint.” As noted, The Pearl Fishers wasn’t restaged until after Bizet’s death and it wasn’t performed very often until the latter half of the 20th century. Even then the renewed interest can be traced at least in part to the popular 1951 recording of the duet by Jussi Bjorling and Robert Merrill. The popularity of this duet creates a bit of an awkward situation because it appears in the first act, so for many listeners the opera may seem to peak too early. However, the opening motif reappears several times over the opera and some productions have apparently reprised the duet as curtain call music or as an additional finale.

Modern audiences also have a tendency to view The Pearl Fishers through the lens of Carmen, seeing it as a sort of preview of better things to come. This viewpoint is of course not quite fair to the earlier work, but it is perhaps inevitable given the ubiquity of Carmen on the opera stage and the relative paucity of any other Bizet compositions in the general repertoire (beyond perhaps his suite of incidental music to L’Arlesienne). As with other composers and performers whose legacy rests largely on a single work, Carmen’s brilliance throws sharp shadows that obscure the rest of Bizet’s oeuvre.