More overtly than in any of his other operas, Mozart presents in Così fan tutte a clear summary of Enlightenment thinking in the 18th century. But he also questions some of those assumptions as the Enlightenment mentality began to cede ground to a focus on the irrational, passionate messiness of human relationships. In other words, Classicism was giving way to Romanticism, and those two polarities are both represented in the opera’s libretto and music. 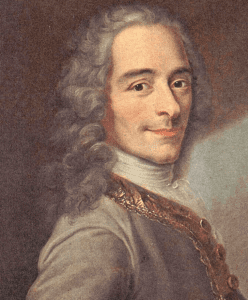 First, the reliance on experiment (symbolized by Don Alfonso) as the source of all “truth” was a principal Enlightenment theme in the mid-18th century. The publication of the Encyclopédie in France—a mammoth compilation of all knowledge available to the Western World—was completed in 1772, and represented the pinnacle of Enlightenment reliance on scientific method and empirical observation. One of the main contributors to the Encyclopédie was Voltaire, and indeed Don Alfonso is a kind of Voltaire-figure in this opera.

Don Alfonso relies solely on “the scientific method” and observation to conclude truths about relationships. His final advice to the lovers—to just get on with life without too much idealism—is a close paraphrase of Voltaire’s prosaic life-advice at the end of Candide: “Cultivate your garden.” Even the appearance of “Dr. Mesmer” in Act II to “heal” the Albanians furthers this reliance by the schemers on objective science. (Mesmer had actually been a patron of the young Mozart a few decades earlier—his parody in Così is something of a tribute to him by the composer. And after a stint in Paris, Mesmer actually returned to live in Vienna in 1790. It’s intriguing to wonder if he ever saw his own parody on stage.)

But is anybody convinced by Don Alfonso’s “scientific’ experiment? Don Alfonso certainly believes he has proved his claim. Despina doesn’t care, as long as she gets paid. Her pragmatic rejection of “love” in favor of “taking a lover” might have satisfied the cool detachment of the Rococo or the dispassionate objectivity of the Enlightenment, but it doesn’t satisfy the romantic (and Romantic!) lovers who are all more confused than enlightened at the end. If the theme of scientific truth as a guide to understanding emotions undergirds the entire opera, then Mozart and da Ponte don’t hesitate to question its usefulness and veracity at the same time.

Related to this reliance on empiricism is the role of the “philosophe” in Enlightenment thinking. The “philosophes” in French Enlightenment society were self-appointed public figures whose critical eye and superior discernment granted them a voice in public discourse. This is certainly manifest in the thinking of Don Alfonso, who assumes the role of an authority on love not because of any particular training or expertise but because he is older and believes himself to have superior experience and intellect. This is what he draws on when he argues with Ferrando and Guglielmo, positing his wisdom against their youth and inexperience. And yet it seems clear to the audience that Don Aflonso’s philosophy is driven more by cynicism than discernment—a reminder that outside of France, “philosophes” were often regarded by other intellectuals as dilettantish, arrogant buffoons.

Neoclassical symmetries and an overriding sense of balance pervade the opera, not only in the casting of three couples as the only soloists, but also in the assigning of a set-piece aria to each of the soloists in each act, and the very democratic series of ensembles in which it seems that every possible permutation of 2-6 singers is explored. Così is much more of an ensemble opera than any other by Mozart. But these symmetries are an artifice that serve to highlight the idiosyncratic differences of personality and demeanor. On the one hand they feed Enlightenment notions of predictability and order, but even the characters in the opera know that they are individuals who can’t be expected to react in the same way to the same situations. Fiordiligi’s response to the new Albanians is different from Dorabella’s; Ferrando and Guglielmo look different, behave differently, and respond differently to their fiancée’s actions. Don Alfonso would have us believe that his experiment produced a clearly-defined, rational, clean-cut conclusion, when in fact the whole process was untidy, lopsided, driven by emotions rather than empiricism, and unnervingly inconclusive at the end.

Finally, the Enlightenment had promised a more politically equitable future, an erasure of class distinctions (culminating in the “Age of Revolution” at the end of the century), and an appreciation for other, especially non-Western modes of living and thinking. All of these are challenged in Così. It is Don Alfonso’s social standing and wealth that put him in the position to carry out this experiment in the first place. He must buy Despina’s assistance (and presumably arrange for the crowd to farewell a military ship and welcome it home in the same day!). Despite his commitment to some Enlightenment ideals, Don Alfonso retains his higher social standing, and the authority that goes along with it, unchallenged to the end. Despina clearly despises the class distinctions that keep her a maid and prevent her from drinking chocolate and enjoying the high life of her mistresses. Even Ferrando and Guglielmo admit repeatedly throughout the opera that their commitment to “honor,” as soldiers, overrides all other considerations. In other words, though a veneer of Enlightenment thinking is present throughout the entire opera, it is only that—a veneer. It proves disappointingly ineffectual in improving any of the character’s standing in the world or contentment with their own lot in life. And that may be one of Mozart’s and da Ponte’s most subversive social criticisms of all.