In 1978 Janet Quinney Lawson Capitol Theatre opened its doors to Utah Opera for the first time. That same year, director Fred Adams called his former student Susan Memmott Allred to design the costumes for their production of Verdi’s Otello. “We had a box of sewing supplies, one sewing machine, and ten costumes” recalled Allred.  37 years later, Allred is the guest costume designer for Utah Opera’s upcoming production of Mozart’s comic opera Così fan tutte.  She has designed all new costumes, produced from scratch, with a 1920s theme. The set of the opera is mostly cream colored, so Allred uses the costumes to add splashes of color and humor while staying true to the period silhouettes.
Her creative process begins months in advance by researching, conceptualizing, and collaborating with the director to create a cohesive vision for the production. Allred gathers her silhouettes, creates a color palette for each set, and then she goes just as fast as she can.
As a costume designer, Allred is responsible for the artistic oversight and she works hand-in-hand with Utah Opera’s Costume Director Verona Green, who does all the logistics and financials.  Allred is given a budget to work within and has done enough shows to know the importance of saving a little extra for emergencies.  She compares her process of buying materials like shopping for shoes, selecting when to splurge and when to save.  “I’m very budget conscious because I came up through the ranks doing all ends so I don’t think about just my idea. I think about the actual production, time constraints, money, body types,  and I think about all the different aspects of that” says Allred.
Fittings begin as soon as the costumes are ready. Allred has learned that “you have to work really closely with your draper-cutters because they have to look at your design, talk with you, and figure out what direction to go. The fabric or person’s body size determines how you create something.” Allred’s rule of thumb is to never put a person on stage wearing something you would not wear yourself. Allred reflects that “it has been a great rule and guided how I treat people and how I dress them.” 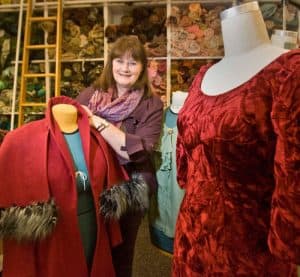 Reflecting on her years with Utah Opera, Allred recalls, “It’s been an interesting  journey. Probably my favorite moment  about it was starting a company at the base, which we did with the company and the shop, and then watching it transition and grow. It’s just really an amazing experience. And I love opera. It’s my favorite art form because it combines all the others. I had never seen an opera until the first time I did it at the JQL Capitol Theatre. Isn’t that crazy? I had done a lot of musical summer stock theater, dramatic, but never opera. And I loved it.”

MEMORABLE MOMENTS
“I was so excited because it was the first time I got to design a show from scratch because we had no money when we started and I had to move into the theater to build them. We never contracted back then. It was just verbal and a handshake…I got to do La Traviata in 1987 and I was so excited and the choruses used to be huge: 37 women and 37 men in the chorus. In the early years I would do partial rent/partial build but Traviata was the first where I got to make all the women’s gowns and it was very fun.”
“One time in Madame Butterfly I was in the balcony watching Madame Butterfly sing and she turned to sing to Suzuki and her obi turned the opposite way. Her dresser had forgotten to do the ties on the obi so I ran backstage, crawled under the set and hid behind the little oriental screen and I whispered to her and she backed up and I tied them (while she was singing). That was pretty crazy!” 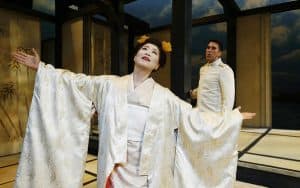 ADVICE FOR UP AND COMING DESIGNERS
“I think the most important thing as a designer is to understand lighting, color, and fabric and that your designs should enhance the show, not take precedence over the show. Your job as the designer is to enhance the performers. For opera goers, what that does is makes it a better experience because they are comfortable watching it. It makes for a whole different journey. I’ve always known I’m just part of the process, I’m not it.”

THINGS TO LOOK FOR IN COSÌ FAN TUTTE
Keep an eye out for the swimwear, bridesmaids’ dresses and the men’s disguises in Così fan tutte. Allred stays true to the comic nature of the opera through adding humor in her costumes. She uses color, recognizable 1920s styles, and even a gag with the Notary’s wig to throw a dash of fun into this opera buffa production.
This is Allred’s third time designing for Così,  but it still feels fresh and new. Allred explains,“It’s funny because even if you’ve done an opera, the next time you do it, it’s a completely different journey. The cast changes, the director changes, it may be in the same century, but that’s just so intriguing to me about the creative mind. If you put 5 people in a room they come out with a different concept than if you put 5 people in another room. It’s just like a flower. It just opens up. I just love the process of taking an idea, taking a flat piece of fabric and creating a three-dimensional object. And I love human beings. I love helping them feel better about themselves.”