Igor Fyodorovich Stravinsky was a seminal figure of the early- and mid-twentieth century musical world far beyond his birthplace near St. Petersburg. As a cosmopolitan in the broadest sense, holding Russian, French, and American citizenships at various times of his life, Stravinsky’s influence was far-reaching.
Igor Stravinsky was born in the town of Oranienbaum, Russia, in 1882, and was raised in the city of St. Petersburg. His father was an operatic bass at the Maryinsky (now Kirov) Theatre in St. Petersburg, and his mother was an accomplished pianist. While Stravinsky studied piano and music from an early age, his parents wished for him to pursue another vocation. He entered law school in 1901 upon graduation from secondary school.

While at St. Petersburg University, he was a less-than-enthusiastic law student, attending merely 50 class sessions over his 4 year tenure. In 1902, Stravinsky spent a summer in Heidelberg, Germany, at the home of the composer Nikolai Rimsky-Korsakov, with whom he began private music theory and composition studies. Rimsky-Korsakov encouraged Stravinsky to continue private study rather than pursue formal music instruction, and Stravinsky followed his advice while earning a “half-course” law diploma in 1906. Stravinsky’s father had passed away by this time, and Stravinsky was no longer under pressure to avoid a musical future.
Another important association for Stravinsky began in 1909. Two of his compositions were performed at a concert in St. Petersburg, a concert attended by ballet impresario Sergei Diaghilev, who had just organized a ballet company in Paris, the Ballets Russes. Diaghilev commissioned Stravinsky for a full-length ballet, The Firebird.

The success of Firebird led to the 1911 ballet Petrouchka, and the 1913 ballet The Rite of Spring, which famously inspired a riot on its opening night.

The next few years saw Stravinsky, his wife Yekaterina (Katya), and their family, dividing their time between Russia in the summer and Switzerland in the winter, with regular trips to Paris for work with Diaghilev. While in Paris, Stravinsky developed professional and personal relationships with the Parisian intelligentsia of the time, including Jean Cocteau, Vaslav Nijinsky, Pablo Picasso, Maurice Ravel, Coco Chanel, and Erik Satie.  As the threat of war loomed over Europe, Stravinsky traveled in July of 1913 to retrieve personal items and Russian folkloric reference materials. Stravinsky was not able to return to Russia due to the First World War and the Russian Revolution, and in fact, did not set foot on Russian soil again until 1962.

During the years 1920-1939 the Stravinskys set up a permanent household in Paris. Stravinsky began a business association with the Pleyel Piano Company, one of the conditions of which was for Stravinsky to create piano rolls for the Pleyel company’s player pianos. The Stravinskys became French citizens in 1934. Most significantly, Stravinsky began an affair with Vera de Bosset, who soon left her husband, while Katya turned  a blind eye to her husband’s infidelity.  In the late 1930s Stravinsky began to build a network of American connections. He was composing his Symphony in C major as a commission for the Chicago Symphony, and would deliver the Charles Eliot Norton lectures at Harvard University in 1939-40. His last few years in Paris were grief-stricken. Katya had suffered from tuberculosis, and transmitted the disease to Stravinsky and their daughter Ludmilla. Ludmilla passed away in 1938, followed by Katya in 1939.

Stravinsky sailed for America in September of 1939 to fulfill his Harvard commitment, and Vera followed after in January of 1940. They were married in March and settled in West Hollywood, California. Stravinsky became a naturalized American citizen in 1945 and lived in California longer than any other location. He soon became a fixture in his adopted community, building relationships with other ex-patriates who settled in Los Angeles, including Otto Klemperer, Thomas Mann, Franz Werfel, George Balanchin, Aldous Huxley, and Arthur Rubinstein.  He returned to Russia as a guest of the Soviet government, meeting with composers Aram Khachaturian and Dmitri Shostakovich, among others. Stravinsky relocated to Manhattan in 1969, and lived there until his death in 1971. He is buried in the cemetery of San Michele in Venice, next to his friend and colleague Sergei Diaghilev. 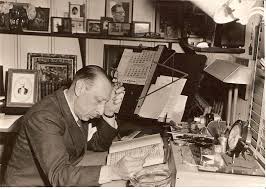 Stravinsky’s career spanned a large part of the twentieth century, 1909-1971, and encompassed a variety of styles. Historians typically divide his output of more than 100 compositions into three stylistic periods: all date ranges are approximate as the lines between “periods” is not distinct. 1907-1919 is considered Stravinsky’s “Russian” period, since many of the significant works from this era are ballets or other theatre works based on subjects from Russian folklore. The music of this time is lushly orchestrated, owing to the influence of Rimsky-Korsakov. The Firebird, Petrouchka, and The Rite of Spring are the most well-known works from this period.

1920-1954 heralded Stravinsky’s return to the formalism and structure of the Classical period, with his works strongly influenced by the music of Mozart, Haydn and other composers previous to 1800. Please visit the chapter on Neoclassicism for more information and examples of this style, which culminated in The Rake’s Progress. His final compositional period, 1955-1968, was marked by experimentation with the twelve-tone techniques developed by Arnold Schoenberg. The first significant work from this final period was In Memoriam Dylan Thomas, for tenor, string quartet and 4 trombones, and other important works include Threni, a cantata, and the Variations for Orchestra.
For a comprehensive list of works by Igor Stravinsky, visit http://www.boosey.com
Materials prepared by Dr. Carol Anderson