Act 4
Another “Entr’acte.”   This one has the key signature of D minor, though it most definitely seems to be in A major, since it begins and ends in that key.   The last act takes place outside the bull-ring in Seville.   Various vendors are hawking their wares cheaply:  fans; oranges; programs; wine; water; even cigarettes (not them again!)
Zuniga runs into Frasquita and Mercédès.    Where’s Carmen, I don’t see her?   We saw her a while ago;   Escamillo is here, so she won’t be far away.   It’s Escamillo now?   She’s crazy for him.   What happened, Frasquita wonders, to her old lover Don José?   Zuniga tells her, and us, that he went back to his mother’s village, but had disappeared when soldiers arrived to arrest him.   He’s free?   For the moment.   Frasquita worries for Carmen.   This conversation was eliminated in the recitative version.
A low E is heard (it’s a dominant pedal – sign up for more Theory Classes!) and the bassoons begin their version of the theme we heard in the Prelude.   The kids announce it’s the “quadrille,” which to us sounds like a nineteenth-century dance, but is actually the French version of the Spanish noun for the matador’s team of assistants.   And, to the Prelude’s music, in they come, with the sun bouncing off their lances;  let’s throw our sombreros up in the air.    Then come the ugly police – down with them!   A D major fanfare heralds the arrival of the Chulos – the bull-fighters’ assistants.  To those many of you who, in days long since gone, were forced to take piano lessons (as I was) and wondered what was the point of learning scales (as I did), here is the answer:  the glorious phrase that greets these Chulos is a simple D major scale, and I must confess to feeling my spine shiver for those few bars (OK, there are many other spine-shivering moments with this opera!). Now come the banderillos, who are the guys who taunt the bull by driving spears into him.   Such swagger!  And look at their fancy silk costumes!  By the way, each entrance is punctuated by the A major Prelude’s theme, which can give rise to some strange changes of tonality. As here.  Without any preparation the tonality shifts from A major to F major to introduce the handsome Picadors who will torture the bull with their lances.
Voices call out “The Sword”:    the man who shows up to end it all with a neat piercing of his sword in the exact place that will instantly kill the bull.  It is, of course, Escamillo. Carmen is with him, “radiant and stunningly dressed.”   The crowd greets him with a shortened reprise of his Toreador’s “chune.”  “If you love me, Carmen, you will soon be very proud of me.”   “I love you”, she replies, “and may I die if I have ever loved any man more than you!”  Does Escamillo enter the arena?   Neither the libretto nor the score give him an exit.
Basses announce the arrival of the Mayor, who, with his police, crosses the stage.    The original libretto is interesting here.  It says that during the music that accompanies the Mayor’s entrance (it’s a “little march,” but the music doesn’t sound very march-like) Frasquita and Mercédès go to Carmen and warn her that José is here in the crowd.   She looks around and says she sees him.    Be careful, they tell her.   I’m not frightened of him;  I’ll wait and speak to him.   As the music speeds up to the opening tempo and theme of the number, the libretto says that the Mayor enters the arena followed by the “Cuadrilla” procession; after them the crowd enters, revealing José.     The orchestra is uneasy during this exit music, for after four bars the winds are interrupted by an ominous descent in half-steps from the strings.   The winds try again, but again are interrupted;  after a third, interrupted, attempt, clarinets and bassoons can manage only the first bar.   A nervous shudder of “Fate” from the violins is followed by a slower, more menacing fragment in cellos and basses;  violas, too, are nervous.  The tension builds to a short stabbing chord.
Despite Carmen’s protestation to her girl friends that she is not frightened, her “It’s you?” sounds at least agitated.   José, on the other hand, is calm (tired/resigned?) with his soft drop of a fifth:  “It’s me.”  Carmen says (and it’s marked senza lentezza = not slowly – more agitation?) she was warned that he was seen around, and also warned to fear for her life.   Not quite as defiant as in the past, she tells him she is brave and had no intention of avoiding him.
José tells her he is not threatening her.   He begs her:  he has forgotten their past.   Can’t we two start over in a different place, far from here?   His vocal line remains calm, but the syncopated strings hint at his suppressed anxiety.   What he asks, she says, is impossible; and note how Carmen’s line has become more commanding as she realizes he’s a broken man.   Note, too, that now she refers to herself in the third person:  Carmen never lies; her heart is inflexible; between her and you it’s over.    But then, marvelously right psychologically, she softly returns to the first person:  I never lied;  between us, it’s over.   You have to wonder if she still, deep down, loves him. 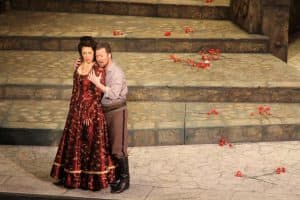 José believes there is still time for them to save each other.   His pleading annoys her:  I know you will kill me, but whether I live or die I will not submit to you.   Again he sings that they could save each other while Carmen wonders why he can’t understand that her heart no longer is his;  you keep saying “I adore you,” but it’s useless.
Nervous heart-beats from the timpani lead to a questioning chord:  quietly he asks “Then you don’t love me any more?”   Nasty chord from low winds and strings leads to a cry that turns his question into a despairing statement.  No, she says, calmly, I don’t.     Passionate outburst from him, accompanied by the cellos:  but I still love you.    Violins repeat his melody, but she wonders what good his words can accomplish.   OK, he says (and violins and violas have an echo of that rhythm we heard in the Finale of Act 2), to please you I’ll stay a smuggler, whatever you want me to do.    But don’t, and here the melody turns to the major key, abandon me;  remember we loved each other once;  don’t leave me! At her most defiant Carmen tells him she was born free and will die free.
Shouts from the arena, accompanied by off-stage brass, cheer the bull-fight. Carmen, at the final cry of “Victoire!” moves towards the arena.   José stops her.  Again the strings are very upset.  Let me go.   The man they’re cheering is your new lover?   You must come with me.  Never, Don José.   You love him?    With a huge C major chord she admits she does, and her resolution leads to another cheer from the arena.
The full orchestra gives us the opening of “Fate.”   I’ve given up everything for you.   More “Fate,” harmonized differently.   So you can run into his arms and laugh at me.    “Fate” starts to pile up:  No, you’ll come with me;  I’m tired of these threats.   Then, she says, to a huge D major chord, kill me, or let me go.  More shouts from the spectators.   For the last time, devil, will you come with me?    No.   This ring you gave me once – take it!   And she throws it away to a nasty figure from the orchestra.   Damn you, he shouts. 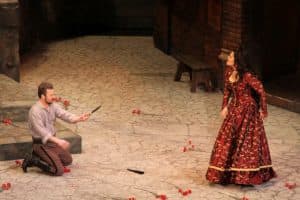 An off-stage fanfare from the arena leads the crowd into singing Escamillo’s “chune,” with the original text about love waits for you – how ironical it now is!    But listen to the “on-stage” strings, clarinets and bassoons.    It’s not specified when José kills Carmen, but maybe at that last sigh from the strings?
“Fate” drowns out the last note of the arena crowd, who now rush out of the bull-ring.    “Arrest me.  I killed her.”   (Escamillo enters from the bull-ring.)  José falls on the body of “my Carmen, my beloved Carmen!”
And so the curtain falls on one of the greatest operas ever written.  Be warned:  “greatest” does not mean “most popular,” though Carmen is now, rightly, both.   Verdi’s Falstaff, for instance, may not be the opera that immediately sells out a season (while his La Traviata, Il Trovatore or Rigoletto do), but no one doubts its greatness.  The same could be said of Puccini:   Madama Butterfly and Tosca are, rightly, hugely popular;  but do they match the dramatic and musical perfection of La Bohème?  They don’t!  For all the reports of the failure of Carmen, let’s not forget that its original run had a respectable number of performances and that the Hofoper in Vienna immediately contracted for a production the following Fall – doesn’t sound like a “failure” to me.
From the outset Bizet wanted to jolt the audiences at the Opéra-Comique out of their comfort-zone and show them something different from what they’d grown accustomed to.   He succeeded brilliantly.    But to his own disadvantage:  he was at least twenty years ahead of what that audience was prepared to accept.   Had he lived, who knows what he would have done.  The tragedy that is Carmen  is also the tragedy that is Bizet.
©Paul Dorgan
Tags
carmen| Keep|