The Creators of Carmen: Prosper Mérimée

NOVELIST
PROSPER MÉRIMÉE  (1803 – 1870)
Like the three men – Bizet, Halévy and Meilhac – who immortalized his novella Carmen, Prosper Mérimée was Parisian by birth.   The child of agnostic parents, he was brought up, essentially, to defy the status quo. At the age of 15 he learned English and went on to study Greek, Spanish and Russian. He attended the Lycée (the equivalent of our Middle/High School) Napoléon ;  while there he translated the poems of Ossian with one of his school-mates, Jean-Jacques Ampère.  (Ossian was the supposed author of a cycle of Gaelic epic poems, translated and published by the Scottish poet James Macpherson in the mid-eighteenth century;   the poems were wildly successful throughout Europe, but the whole thing was a hoax:  Macpherson wrote them, based on folk stories).  At the University of Paris, Merimée studied law, obtaining his license at the age of 20. The following year he wrote his first story, La Bataille, which remained unpublished until 1887; he published four articles on Spanish Theatre for a literary magazine.
In 1825 Le Théâtre de Clara Gazul, comedienne espagnole was published, translated from the Spanish by “Joseph L’Estrange.”  A hoax.  Everyone in literary circles knew that the six plays (plus the introductory biography of Clara) were the work of Mérimée.  Dispensing with the French Classical ideal of the “dramatic unities” (of time and place) in these plays made him the darling of the emerging movement which came to be known as “romanticisme” – and this was five years before Victor Hugo rocked the French theatrical world with his Hernani.  The great German poet Goethe thought highly of the collection.
Two years later,  Hyacinthe Maglanowich published La Guzla, ou Choix de Poésies Illyriques recueillies dans la Dalmatie, la Croatie et l’Herzegowine (La Guzla, or a selection of Illyrian poetry collected in Dalmatia, Croatia and Herzegovina), a collection of prose translations of ballads on various mystical themes.  Another hoax.  Mérimée again;  though some critics were not convinced, despite his admissions/confessions/protestations.  And again, great notoriety;  both Pushkin and Lermontov, the great Russian writers, for example, translated his “translations” into Russian.
La Jacquerie, published under his real name in 1828, evokes, in a series of dramatic, but apparently unstageable, scenes, a fourteenth-century French peasant revolt. A play from the same year, La Famille de Carvajal, is reported to be equally unplayable.  The next year Mérimée published a historical novel which told of the events that led to the massacre of French Protestants in 1572. Chronique du règne de Charles IX was the basis for Ferdinand Hérold’s 1832 opéra-comique La pré aux clercs. (Some of you may know Hérold’s name from his overture to Zampa, an opéra-comique which premiered in 1831;  it used to appear  regularly in an orchestra’s “Pops” season when the term meant “Popular Classics Which Don’t Fit Into Our Regular Programs”). This massacre of French Huguenot Protestants (who followed Calvin’s teachings) became the climax of Meyerbeer’s Les Huguenots, produced four years later at the Paris Opéra, though there is no direct evidence that its librettists, Eugène Scribe and Émile Deschamps, were influenced by Mérimée’s novel.
Also in 1829 appeared the first of his short stories: Matteo Falcone.  Six more followed between May 1829 and June 1830; in one of them, La vase étrusque, the duel was drawn from life:  Mérimée was wounded in one by the husband of a woman with whom he was having an affair. Oh, and there were three more plays!
After that he needed a rest and took himself off to Spain for six months.  He reported his impressions in a series of four “letters” (actually essays on various aspects of Spanish life) published in the Revue de Paris between 1831 and 1833. By chance, while there, he met the wonderfully-named Cipriano Guzman Palafox y Portocarrero who inherited the title of Count Montijo.  Cipriano introduced the Frenchman to his wife and two daughters when Mérimée arrived in Madrid.  This friendship would pay dividends twenty-three years later when the younger daughter, Eugenia, married Emperor Napoléon III.
The month after he left Paris, the July Revolution broke out; the conservative King Charles X abdicated at the beginning of August and was succeeded by his cousin Louis Philippe, Duke of Orléans, who reigned until the Revolution of 1848 forced his abdication.
Mérimée returned to Paris in December.  The following March he was appointed the equivalent of Private Secretary to the Minister for the Navy; in May he became a chevalier in the Légion d’honneur, France’s highest order honoring military and civic merit.  In 1832 he was appointed a “Special Commissioner” charged with supervising sanitary measures during the cholera epidemic which killed 13,000 Parisians within a few months.  In December he moved to the Minister of the Interior, and in May of 1834 he was appointed Inspector-General of Historic Monuments, responsible for officially recognizing them as “historic”and ensuring their preservation. 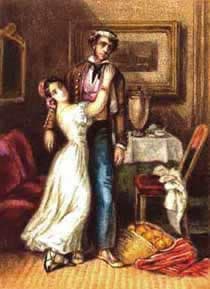 Fictional stories gave way, perforce, to factual reports on his various official travels throughout France, which took place during the summer months.  Four of these were published in 1835, 1836, 1838 and 1839. In 1843 he was admitted into the Académie des Inscriptions et Belles-Lettres, a society devoted to the Humanities and the following year he was elected to the Académie Française.  For the next three years his spare time was taken up with L’Histoire de Don Pèdre, roi de Castille (The History of Don Pedro, King of Castille), the first installment of which appeared in the December 1847 issue of the Revue des Deux Mondes.
Needing a break from the writing of this History, he wrote the first three chapters of Carmen which were published in October 1845, in the Revue des Deux Mondes. (The fourth chapter, which one critic describes as “merely inept” and “an error of judgement,” was added for the first commercial publication of the story in 1847). After 1846, Mérimée  wrote no more stories for about twenty years.  The official travels in France continued every summer.  And Mérimée began to consider himself a historian:  a writer of facts rather than of fiction.  Around this time he became interested in Russian literature, and his publications, as well as his translations from Russian literature, bear him out.  In 1849 he published his translation of Pushkin’s short story The Queen of Spades. (Opera-lovers know the story from Tchaikovsky’s great opera Pikovaya Dama.)  Other translations followed, including Gogol’s The Government Inspector in 1853; and  there were articles on Gogol (1852); Pushkin (1868); and Ivan Turgenev (1868). The historian surfaced in 1852 with his Dramatic Scenes Le Faux Démétrius as well as Episode de l’histoire de Russie:  Les Faux Démétrius – three of them popped up between 1598 and 1613.   The first of them we know from Mussorgsky’s operatic masterpiece Boris Godunov.  Le Moniteur universal published his Les Cosaques de l’Ukraine in 1854. La Révolte de Stenka Razine, which told of the revolt of Stepan Rezin, a Cossack who led a major uprising in Southern Russia in 1670/71, was published in 1861.  (Alexander Glazunov wrote a symphonic poem named after him and, in 1964, Shostakovich wrote a cantata –  The Execution of Stepan Rezin – for bass, chorus and orchestra, to a text by Yevgeny Yevtushenko).  Three years later Mérimée penned Histoire du rêgne de Pierre le Grand – a history of Peter I of Russia.
In 1852 the Second Empire was proclaimed, and Louis-Napoléon Bonaparte became Emperor Napoléon III.  His marriage, in 1853, to Eugenia de Montijo (see above about her!) brought Mérimée into  life at the new court.  He was appointed a Senator and stopped his yearly tours as Inspector of Historic Monuments.   In 1854 his private life fell apart when his eighteen-year long liaison with Valentine Delessert ended bitterly.
The collapse of this relationship seems to have brought about a parallel collapse of his health. He left Paris for Cannes, returning to the capital only when his responsibilities at court demanded his presence.   The three stories he wrote in the last years of his life were written to entertain the Empress and her ladies at court and were not intended for publication.  By 1868 he was a complete invalid and the news of the Prussian victory over the French in early September 1870 resulting in the collapse of the Empire and the exile of his friend, the Empress Eugénie, can only have hastened his death on September 23. He is buried in the Cimetière du Grand Jas, in Cannes.
©Paul Dorgan