At first glance, Man of la Mancha seems to be a combination of the three things that most likely come to mind when Americans imagine Spain and Spanish culture: Don Quixote, flamenco music, and the Spanish Inquisition (unexpected or not). Patrons of Utah Opera might also consider doubling down on their cultural tourism by visiting downtown eateries Martine Cafe or Finca for tapas and Spanish wine before the show. However, the treatment of this Spanish subject matter in Man of La Mancha perhaps avoids stereotypes due to Wasserman and Leigh’s unique approach. In order to appreciate their creative take on the work, however, it is necessary to dig a little into Cervantes’ masterpiece, even if we’re really only able to scratch the surface. 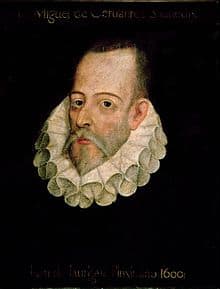 Miguel de Cervantes Saavedra’s novel Don Quixote was published in 1605, followed by a second volume in 1615. Cervantes’ writing career occupied the latter part of his life; he had previously served in the Spanish Navy, and was injured at the Battle of Lepanto in 1571, and spent several years as a slave in Algiers after having been captured by Ottoman pirates. After returning to Spain in 1580 he worked as a tax collector and purchasing agent for the Spanish Armada as he tried to gain a foothold as an author prior to the instant success of Don Quixote in 1605. Of the two parts of Don Quixote, most of the more famous episodes of the book take place in the lighter and more farcical first volume; the second volume is more serious and philosophical in tone. Cervantes was likely inspired to write the additional 1615 volume by the publication of a knock-off sequel by Alonso Fernández de Avellaneda (a pseudonym). In a striking move, all of the characters in the second volume of Don Quixote are familiar with the stories of both the first volume and the fraudulent sequel, and many of them use this information in order to deceive and humiliate Don Quixote and his squire Sancho Panza.
Even if the majority of us haven’t read the rather imposing entirety of Don Quixote, we know basics of the deluded elderly knight’s story as part of our generalized cultural knowledge. But there are a number of specific references just within the characters themselves that might deepen our understanding of the world from which they were drawn. Quixote himself is a hidalgo named Quixana, a country gentleman landowner on the lowest rung of nobility, which affords him the time and inclination to surround himself with the chivalric literature that ultimately consumes him and leads him to pursue another identity as Don Quixote. Quixana is a bachelor and lives a fairly dull life full of routine. The only women in his life are his niece and his housekeeper, and he is friends with a priest and a barber. In any case, Quixote devises for himself the key ingredients for any proper knight-errant. He takes an aristocratic title, “Don Quixote de la Mancha,” and in doing so elevates his social status from hidalgo to caballero with the honorific title “don” and follows the convention of including one’s homeland in the title. However, it is worth noting that the state of “La Mancha” is not a particularly exotic or even desirable locale; it’s a fairly arid plain full of wheat farms and windmills without much else to recommend it. The word “mancha” in Spanish also translates as “stain,” which isn’t particularly glorious. Quixote then promotes his nag of a horse into a warhorse named Rocinante, a name which combines rocín (a worn-out old horse) and ante (before), implying that Rocinante was a nag before, but is now also before all other nags (Johnson 42). For the penultimate piece of his chivalric world, Quixote invents a lady in whose honor he will ride forth by reimagining Aldonza Lorenzo, a girl he apparently pined after in the distant past, as Dulcinea del Toboso. Beyond the name’s obvious associations with sweetness, the inclusion of the town of Toboso is significant because during Cervantes’ lifetime it was known primarily for the fact that most of its inhabitants were moriscos, descendants of Muslims who had been forcibly converted to Christianity around 1500. The Spain of Cervantes was fairly obsessed with racial and religious purity, so Toboso would have carried very negative associations for many readers, heightening the irony of Quixote’s naming his lady after it. Even just in these names, the clashes between reality and imagination that will come to define much of the novel are already apparent (Johnson 44).  Soon after Quixote has devised this imaginary identity for himself, he meets Sancho Panza and gains his final piece of knightly equipment: a squire.
It’s perhaps tempting to map many social and cultural oppositions (especially the opposition between the mind and the body) onto the pairing of Quixote and Sancho Panza. Quixote is from the lower rungs of the upper class and he lives a life of the mind, wrapped in literature. Sancho Panza, on the other hand, is a pot-bellied illiterate peasant who lives for worldly and bodily pleasures (rather than simply going along with Quixote because he likes him, the Sancho of Cervantes’ novel hopes to gain land and status from their adventures). Sancho knows nothing of chivalry and speaks in the proverbs and homilies of oral traditions. One might also see in the two a version of the hero/sidekick dynamic, in which Sancho is a sort of everyman character who has to deal with rather extraordinary circumstances.  They also seem to represent an archetype of the “fat/thin” oppositional pairing that can be seen in comedic duos like Laurel and Hardy, but which also serve to dramatize the competing impulses and drives within all of us in non-comedic contexts, such as George and Lenny in Of Mice and Men or Ishmael and Queequeg in Moby Dick (Johnson 48).
On another level, Don Quixote is also a work steeped in an ideal of social rebellion. Quixote’s madness functions in some ways as a rebellion against the aristocratic and religious class stratifications that held fast in Spain in the 1600s, an act of audacious self-creation as opposed to reliance on one’s inherited station. Although, naturally, an isolated iconoclast fighting against such rigid social institutions is nearly always destined to lose. Indeed, there is a fundamental irony in the fact that Quixote’s madness essentially replaces the caste systems of 16th/17th century Spain with those of feudal Europe (Johnson 11). Finally, one might consider both Quixote and Sancho are using their quests as a way to escape from households dominated by women (Quixote’s niece and housekeeper, and Sancho’s wife) in order to reclaim a sense of manly excitement in their lives (Johnson 48). 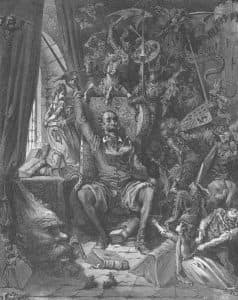 With such intricate and subtle depths, Don Quixote provides a wealth of possible and even contradictory interpretations, very nearly to the point that attempting to assign a final set of meanings to the text seems almost fruitless. The 17th century reader would have recognized the intricate web of satirical allusions to earlier Renaissance literature, particularly chivalric romances and pastorals. For the 18th century rationalist, Don Quixote would likely be a cautionary tale warning against the dangers of madness and flights of fancy. 19th century Romanticists saw in the mad knight-errant a reflection of their own self-image as tragic artists who were fundamentally out-of-step with wider society because of their search for deeper truths (Johnson 24-27). Indeed, this interpretation forms the core of Man of La Mancha  and is echoed in many other 19th and 20th century works such as Goethe’s The Sorrows of Young Werther (1774), Mary Shelley’s Frankenstein (1818), Schubert’s Winterreise (1827), Büchner’s Woyzeck (1879), and Kesey’s One Flew over the Cuckoo’s Nest (1962). The tone of Man of La Mancha is perhaps more optimistic than these other works (or Don Quixote itself), in which the idealistic protagonist is usually brought to heel at the end, often with extreme violence. However, even Wasserman’s drama ends with reality crashing down as Cervantes and his servant are led off to face the Inquisition.
For 20th century thinkers and writers, the novel’s use of metafictional devices prefigure both the postmodernist destabilization of the author as a source of authority and the existentialists’ investigations of individual subjectivity and authenticity in relation to lived reality. Although he begins by addressing the reader as the author of the novel, Cervantes piles on additional authorial layers when he states that much of the original text of Don Quixote was written down by an Arab historian named Benengeli whose interpretation of events may not be trustworthy. The text encountered by the reader is then a transcription of the Arabic text as translated by a young bilingual morisco (a forced convert from Islam) who the author has hired to do the job. Further, in the second volume of Don Quixote, Don Quixote and Sancho Panza are made aware that an account of their previous adventures had been published, so they are now living in a world in which they are simultaneously literary characters and flesh-and-blood people. Recall also that the unofficial sequel to Don Quixote by the pseudonymous Alonso Fernández de Avellaneda was published between the publication of Cervantes’ first volume of Don Quixote in 1605 and its second volume in 1615. Near the end of the second volume, Cervantes directly addresses the inaccuracies of this portrayal. Not only does this house of mirrors complicate the relationship between author and reader, but it also questions the nature of identity within the world of the novel itself.
Materials created by Ross Hagen.