Explosive Ordnance Disposal is what most of us know as “bomb disposal,” and refers to the protocols and techniques put in action to neutralize explosive devices. EOD is one of only a few disciplines that is part of four of the five branches of the United States military—Army, Navy, Air Force and Marines. Bomb disposal first became a standardized military discipline in World War I. Hurried mass production of artillery shells led to a large proportion of “duds” fired on the front, and these unexploded shells were a hazard to both sides of the conflict. German development of delayed action fuzes (the device that initiates detonation of the main charge) in 1918 created additional technical challenges to military personnel because of the uncertainty of detonation time. As quickly as bomb disposal technicians learned to deal with these unexploded bombs (UXBs), ordnance developers would create new technology to make disposal even more challenging, in a game of “cat-and-mouse” that continues to this present time.  During the Blitz of London, bomb disposal companies were created by the British Royal Engineers to deal with the hazards of UXBs, and British Bomb Disposal experts helped establish US bomb disposal schools and squads shortly after the attack on Pearl Harbor. 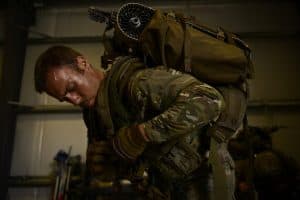 An explosive ordnance disposal technician, straps on an iRobot 310 SUGV

The Middle East conflicts of the 21st century have seen a rise in the creation of Improvised Explosive Devices (IEDs) and Vehicle-Borne IEDs. Because of the non-standard methods of construction and the inherent instability of such explosives, EOD science developed remote methods for dealing with these weapons; when EOD technicians were first deployed to Iraq and Afghanistan, these bomb-disposal robots weighed as much as 700 pounds. Now EOD teams utilize 30 pound robots that can be carried in a pack and are controlled by reprogrammed videogame controllers.  In the early days of the Middle East conflicts, EOD teams patrolled in armored vehicles, searching for evidence of EODs, but in more recent years the teams have exchanged vehicular patrols for “dismounted,” or walking patrols. The titular “Long Walk” is only employed when remote methods have proven unsuccessful. An EOD tech will don an 80 pound protective Kevlar suit, with a helmet and face screen, and approach the explosive device to disarm the munitions by hand. Typically only the technician’s hands lack armored protection. The bomb suit seen in our production of The Long Walk was obtained from Hill Air Force Base in Layton, UT.

Example of a protective bomb suit

The US military employs approximately 7000 EOD personnel, men and women alike. EOD is understandably a dangerous discipline, requiring the utmost care and patience while locating and rendering IEDs safe. EOD training can require several years, and can see as much as a 75% attrition rate. The intensive training forges bonds of teamwork and dedication that are essential to mission success. More than 20 Air Force EOD personnel have lost their lives since 2006, and over 150 have sustained extensive injuries, including loss of limb and traumatic brain injury due to repeated exposure to blast waves. During conflicts of 2003-2014, EOD personnel typically experienced a very high level of intensity during their deployments, and often rotated back to the front in quick succession, with personnel replacing those personnel that originally replaced them. According to the Airman website, a publication of the USAF Office Public Affairs, Tech Sergeant Joshua Langdon said in 2013, “Finding an IED or other explosive device is not a rare thing. As an EOD tech, you stay pretty busy when you’re deployed.”