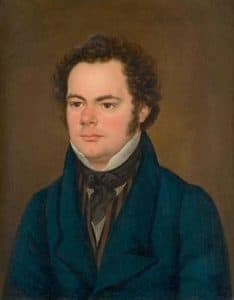 Franz Schubert was the first composer, and the greatest one, to translate Scott poems into song. Adam Storck’s German translation of The Lady of the Lake was published in 1819. In 1825 Schubert set seven of the songs which were published the next year as Liederzyklus vom Fräulein vom See, Op. 52: three were for solo female voice and piano;  two for baritone and piano;  one for a male voice quartet;  and one for a female choir. The sixth poem of the cycle is probably the most familiar of all Schubert’s melodies.  We usually hear it sung to the Catholic Latin prayer “Ave Maria,” but that text was adapted, and distorted, to fit Schubert’s vocal line.  Yes, Ellen, Scott’s heroine, prays to the Virgin Mary, but her opening words, “Ave Maria,” are the closest the Catholic Latin gets to Scott!  Sometime that same year he set an unknown German translation of a song (“Lied der Anne Lyle”) sung by the heroine of A Legend of Montrose (1819); “Gesang der Norna”, also composed in 1825, came from The Priate (1822);  both songs were published together, as Op. 85,  in 1828. The following year produced “Romanze des Richard Löwenherz” to a translation by Karl Ludwig Methusalem Müller which had been published in Leipzig 1820. The song is sung by the disguised Richard the Lionheart in Ivanhoe (1820).  Was it possible that a German translation of Scott’s novel was published in the same year as its first publication in England?    Especially by a writer whose only connection to Scott (at least on Google) is as the author of this translation?  Two published sources I consulted (John Reed’s The Schubert Song Companion, and Graham Johnson’s exhaustive, and exhausting, 3-volume Franz Schubert: The Complete Songs) are confident that the German translation was published in 1820. Johnson is more confusing:  he prints the German text, with a translation, and then adds Scott’s English text; under which he gives us the following: “Sir Walter Scott (1771-1832), translated by KLMM (1771-1837); and then “poem written before 1820”. But whose poem?  I’ve seen no evidence that Scott had published the poem earlier, as a separate entity, and then incorporated it into Ivanhoe.  No poem, no translation!  So how could Müller have translated the poem before it was published in England?  Might he have had pre-publication access to Scott’s novel, so that his German translation would be published simultaneously with the original English one? Not very likely, given Müller’s literary obscurity.  Schubert, of course, didn’t care (so perhaps neither should we):  he found a text which inspired music, and followed his instincts!
Other composers who set Scott’s texts include the Mendelssohns (both Felix and his sister Fanny); Max Bruch (composer of the great G minor Violin Concerto); the Danish composer Adolf Jensen; and, of course, a slew of British composers.
By the end of the nineteenth-century, Scott’s literary star had sunk very low, and a literary critic could probably explain this huge drop in popularity to the achievements of his younger contemporaries: Jane Austen (1775-1817); Elizabeth Gaskell (1810-1865); Charles Dickens (1812-1870); Anthony Trollope (1815-1882); and those various Bronte girls (1816-1855 encompasses the lives of all three of them!)   Who seized on his popularization of the novel form, and developed it, in their various ways, as a medium in which real life could, or might, be discussed on the page.   Readers began to prefer these novels (fiction though they were, but based in a reality they would understand) to Scott’s “historical-romantical” output, which was based on a nostalgic evocation of a past none of them could now relate to.
Although relatively few book lovers read him today, we music-lovers owe Scott a lot:  Schubert’s “Ellen” songs (which include his Ave Maria); Rossini’s La donna del lago; Bellini’s I Puritani; Bizet’s La jolie fille de Perth;  and, of course, the main reason for this essay:   Donizetti’s Lucia di Lammermoor.
©Paul Dorgan