Dates are important. Not only are they signposts that allow us to reach back through time and measure our progress against important historical moments, they also offer fuel for our imaginations as we look toward future milestones and guess at how our lives might change. As such, the world at the turn of the previous century was an anxious one. Both mainstream religion and the classical sciences were on the ropes as the planet became a much more knowable entity. The blank spaces on the maps were filling up rapidly. The secrets of the human body were yielding to an ever more refined scrutiny. Technology was exploding. With the electrification of our cities, the rise of international telephone communication and the advancement of revolutionary thought on subjects like women’s rights, Freud’s “unconscious” and the pervasive “degeneration” of mankind, it seemed that life in general was undergoing a process of rapid de-mystification. At the very least, it was obvious to all that the materialistic old ways were soon to suffer at the hands of radical change, a concept welcomed by many in the arts. In contrast to our own time, the period now known as fin-de-siècle looks like a moment in history defined more by its answers than its questions.
It was in this era of doomed decadence that Puccini premiered what was to become his most beloved work, La bohème, in 1896. Performed first in Italy but based on a quintessentially French text, Henri Murger’s Scènes de la vie de bohème, the opera tells the
story of a time gone by when lovesick artists lived hand-to-mouth lives among the Parisian bourgeoisie they loathed and envied. In truth, bohème was met with rather faint praise at first which according to its conductor, Arturo Toscanini, could be attributed to the success of Puccini’s previous work, Manon Lescaut. He felt audiences might have been expecting something much grander from bohème and weren’t initially prepared for a piece that was so intimate and sweetly understated. It is also possible to imagine that in such adventurous period of music history, Puccini’s score, though in many respects quite progressive and maybe even somewhat “modern” by the traditional standards of grand opera, struck the ear as simultaneously a bit old-fashioned and not old-fashioned enough. 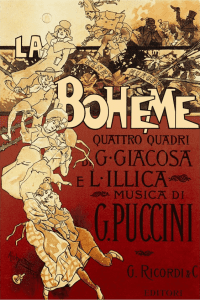 Consider some of the other important musical trends and events of 1896. Claude Debussy was in the midst of a 10-year occupation with his opera, Pelléas et Mélisande, and was regularly pushing innovation in the areas of form, harmony, and instrumentation. Richard Strauss premiered his Also Sprach Zarathustra in November and was on a run of successes with large orchestral compositions that would soon cement him as a living icon. Tchaikovsky had been gone for just three years and Bruckner would die that very year, leaving it to Gustav Mahler to continue the progressive evolution of the symphonic form. And for Brahms, the venerable master, 1896 was his last full year of life, after which he would effectively surrender the defense of the Germanic tradition to the Wagnerites and the French Symbolists. In another arena, Gilbert and Sullivan premiered their last operetta, The Grand Duke, to disastrous effect in March. And what of American Bandmaster, John Philip Sousa? He was in Europe in 1896 too and, according to his autobiography, he conceived of his masterpiece, the Stars and Stripes Forever, while there on Christmas Day. To be sure, there was a lot going on and quietly watching it all unfold was a young Arnold Schoenberg who, in the new century, would change compositional thought forever with Pierrot Lunaire.
It wasn’t only the concert stages that experienced the effects of the coming “modernization.” As is still often the case, the nimble and visionary theatre scene lead the way and it was in this discipline the revolution could be felt most acutely. There were two contrasting dramatic premieres in 1896 Paris that provide us today with an interesting perspective on the environment into which Puccini was releasing his latest creation, namely Oscar Wilde’s Salome and Alfred Jarry’s Ubu Roi.
Salome was originally planned for an earlier debut, in 1892, but was banned by the British 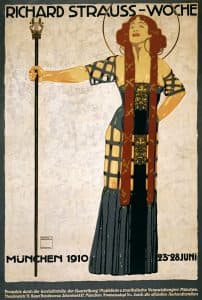 1910 poster by Ludwig Hohlwein for Salome.

government due to its “illegal” representation of Biblical characters on stage. Rarely far from controversy, Wilde would be absent when the work was finally staged in Paris due to his 1895 conviction and imprisonment for “gross indecency.” Wilde’s “unacceptable” lifestyle was emblematic of the times and left him on the wrong side of a troublesome fin-de-siècle debate. He was an aesthetic and as such, thought art ought to be based on beauty rather than morals. This put him at odds with the proposed “regeneration” of human values many hoped would erase the prevailing sensual gluttony they perceived in others, others like the Bohemian-style artists who were regularly testing the limits of the cultural patience. The play itself was a blend of prior styles and perspectives on the Salome story and was alternately described as plainly derivative and a brilliantly modern fusion of ideas. In any case, Wilde’s creation would be immortalized in the opera world within a decade by Strauss, who would unabashedly take the tale to its controversial conclusion through some startlingly original music. Puccini himself would attend on opening night in 1905.
Back in the early winter of 1896, however, an acquaintance and colleague of Wilde’s named Alfred Jarry created a smaller but much more shocking scandal. Jarry was by all accounts an odd person with ambiguous social tastes who also lived, appropriately enough, a rather Bohemian existence in Paris. He was an artistic anarchist whose work, Ubu Roi in particular, is often cited as a precursor to the Surrealist movement of the 1920s. The piece is based on the exploits of a wholly unlikable fool called Père Ubu who, over the course of five acts, blusters and swears and makes a ridiculous mockery of the elite and their unwarranted, ill-used power. It is an intentionally absurd indictment of the politics of class and, whether or not the author intended to start a movement, it was truly a work ahead of its time by decades. The December premiere was marked by the disturbance caused when Père Ubu made his first utterance, a cleverly misspelled version of the French word “Merde.” It apparently took a full 15 minutes for the crowd to calm itself sufficiently enough for the play to continue and each subsequent statement of the word (there were many) elicited a new barrage of shouts.
Alfred Jarry and Oscar Wilde both died penniless and ill within a few years of these events, a condition Puccini’s characters from La bohème would have understood all too well. 1896 itself though, had little the fictional Rodolfo and Mimì would have immediately recognized. This was the year of the first x-ray machine, the first modern Olympic games, the first publication of the Dow Jones Industrial Average, the first photo of a bare-chested woman to appear in National Geographic, the entrance of Utah into statehood. It was a thoroughly contemporary world in 1896, one that was expanding in almost every way and one that was seemingly much more distant from the 1830s than the number of years might tell.
It hardly seems possible that an endearingly anachronistic work like bohème could have been born during such a forward-looking period and of the same soil that made Ubu Roi. But maybe Puccini’s great masterpiece has stood the test of time precisely because it is not of its time. Maybe the subject matter and the musical language used to tell the story are essentially timeless and because of that remain unbound by either the date of Murger’s book or that of the opera’s premiere. Puccini makes no grand or critical statements about the nature of humanity at the end of the 19th century but offers instead an alternative to that popular impulse by allowing his audience to enjoy something simple and instantly recognizable.
La bohème is a slice of history from a less complicated age and as such provides us a chance to forget ourselves for a while. It isn’t radical but it is necessary.
Jeff Counts is Vice President of Operations and General Manager of Utah Symphony. He was program annotator for Utah Symphony from 2010 to 2014 and has been writing articles for Utah Opera since 2010.
Tags
40th anniversary season| history of the opera| Keep| la boheme| Music|