Every Voice Tells a Story

Every Voice Tells a Story, and certainly our dad’s resonated loud and clear, both from the stage and within the community. As a singer, he was known as an emotional interpreter, gifted with languages, a strong actor, and a congenial colleague. The same charisma he exuded on stage was characteristic of his leadership of Utah Opera. What he lacked in any formal training as an administrator, he made up for with an entrepreneurial spirit and a fearless attitude. He became a familiar figure pounding the pavement on Main Street or meeting with community leaders at Lamb’s Grill or the New Yorker (or just sharing a hot dog with his daughters in the basement of ZCMI!).  He related easily to people from all walks of life, was convinced that everyone could and should enjoy opera, and was not shy about sharing his passion.

Likewise, he was embraced as a native son done good. Legislators could count on his annual rendition of “Danny Boy” during the session to bring a tear to their eye, and parade goers and rodeo fans applauded the singing cowboy riding his favorite horse Popeye during the Days of ’47 (how fondly we remember polishing his silver saddle every summer!). Whatever sleepless nights accompanied his daring venture forty plus years ago were offset by optimism and good fortune. Talented local singers, helpful political, religious and community leaders, and good timing combined to make his dream of starting an opera company a reality.

Early endeavors included a state-wide education program, thanks largely to Haven Barlow and to then Governor Cal Rampton. Perhaps some of you remember seeing Little Red Riding Hood performed at your elementary school, or one of our final dress rehearsals in the Janet Quinney Lawson Capitol Theatre when you were a teenager.  Amahl & The Night Visitors became an early Christmas tradition, with a touring production braving ice and snow to reach audiences in Wyoming.

The ingredients needed to build an opera company are much the same today, and might resemble a plot for a good opera:  take an unsuspecting, somewhat naïve tenor, mix well with Western frontier attitude, add extra and much-needed moisture from humidifiers, and cap it all off with a generous pinch of tender loving care. Mix with great artists, a supportive public, and forty years later, we have a thriving, respected opera company that still exudes the warm welcome of a gathering place for our artists and audience members alike.

Each of the operas we are doing this season has a particular connection to our father: while earlier forays set the stage, our 1978 production of La bohème at Kingsbury Hall marks the official beginning of Utah Opera, and Rodolfo was a role our dad sang all over Europe and throughout the United States. His gripping intensity became a hallmark of his interpretation of Canio in Pagliacci. Dad loved Puccini’s delightful comedy Gianni Schicchi, and as a young tenor sang the role of Rinuccio. He was honored when famed bass Giorgio Tozzi accepted his invitation to appear in the title role of our 1988 Production.

Dad had a great sense of humor which was put to the test in his final appearance on the Janet Quinney Lawson Capitol Theatre stage in 1989 during a production of Die Fledermaus.  Staging in Act I had him leaping on to a couch during a duet with his Rosalinda. He rambunctiously overestimated the momentum needed for the leap which catapulted the couch and Dad into a somersault. Rosalinda had a hard time maintaining her composure, and in response to her next line in the operetta, “Is there anything I can get you, my dear?” dad responded to the audience’s delight, “yes, some BenGay!” 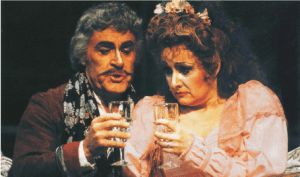 While Moby-Dick is a more recent addition to the operatic repertoire, Christopher McBeth’s decision to include it in our 2017-18 epitomizes the risks that were inherent and necessary in the early years of Utah Opera, and is a bold choice that is a nod to our future, and the ever-evolving art form of opera and its ability to address relevant themes. Fortunately, our journey is a happier one than that of the Pequod, and while not without our own challenges, we face them in a world solidly connected with others who share our passion. Our new production of Moby-Dick will grace other stages beyond Utah, and highlight our reputation as a company and a state that are innovative, resourceful, and successful. We are grateful to be a part of that journey!

Leslie Peterson is the Vice President of Development for Utah Symphony | Utah Opera and also the daughter of Utah Opera founder Glade Peterson.