Celena Shafer is a Utah-born soprano who has sung countless roles with Utah Opera over the years, garnering acclaim for her silvery voice, fearlessly committed acting and phenomenal technique. She has won praise for her roles with Santa Fe Opera, Los Angeles Opera, and Lyric Opera of Chicago, to name a few. She returns to Utah Opera’s La bohème singing Musetta. 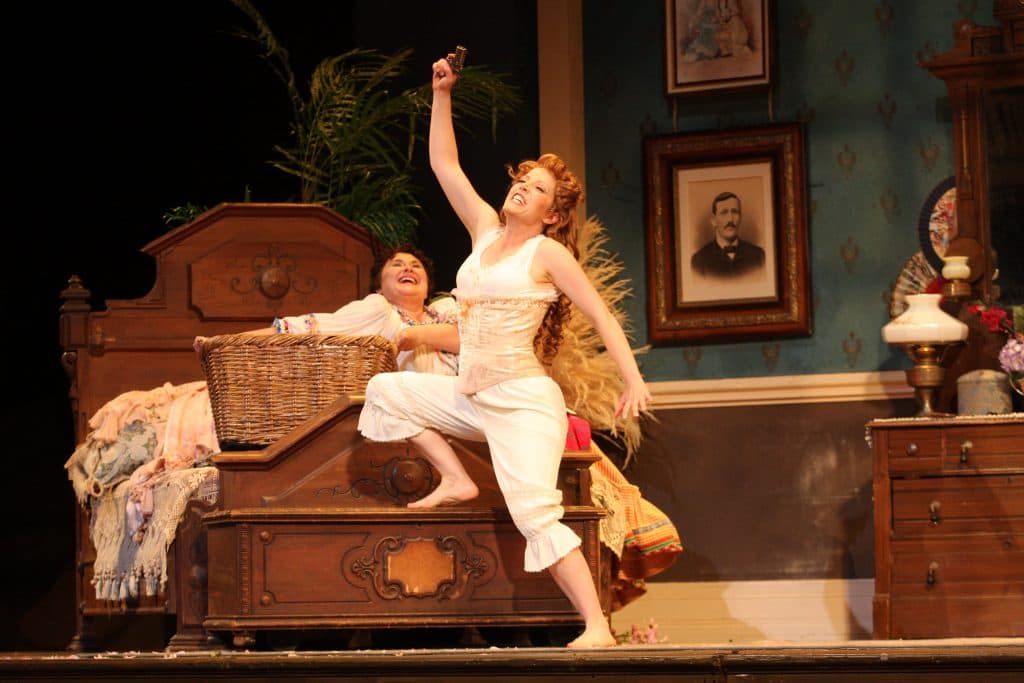 What does it mean to perform the role of Musetta again with Utah Opera for the company’s 40th anniversary season?

I am so happy and honored to be included in the company’s 40th anniversary! I feel that this company and community have always nurtured, supported, and believed in my talent. The first opera I ever saw was Carmen at Utah Opera when I was 11 years old with my fifth-grade class at education night. I was enthralled. It was only a few years later that I decided I wanted to be an opera singer. From that point on, the Utah community has cheered me on and given me so much love as they watched me bud from a young, immature singer to a professional. When I made decisions to primarily concertize in order to raise a family, Christopher McBeth kept my operatic choices and abilities fresh by including me in the Utah Opera family.

My best supporters have come from the Utah Opera circle. I see people in the community all the time who I know are my Utah Opera friends! I may not remember their names, but I know their dear faces.

How do you identify with the character?

I do identify with Musetta. She has chosen a certain lifestyle out of necessity (whether that be emotional or physical, or both). I can see that there are choices in my life that I have made out of desperation. It gives me a lot of compassion for her.

I also like this role because the audience gets to see three distinctly different parts of her persona. Act 2 shows her “public” loud self, well known as a floozy. She seems quite shallow and selfish in character. She is full of disdain for anything that does not suit her.

In Act 3 we get to see that she loves Marcello deeply, but the pressures of their lifestyle tear them apart through bitter arguing.

Finally, the last act gives us a glimpse of the true core of her character. We see her tenderness and sincere compassion for others. We even have a few measures revealing her religious background. Musetta, religious? Yep. It’s there in the score.

Share some of your memories of performing with Utah Opera. What has the company meant to you as a local singer?

Oh wow. The memories I have with this company are far too many and so dear to me. I was barely pregnant when I performed in La rondine. I couldn’t figure out why my costume was getting tighter so fast, every night! I knew I was pregnant, but, come on! I couldn’t be getting that fat yet! It was during the production that I found out why: I was having twins! Those twins are now 11 years old!

Another favorite memory was Britten’s A Midsummer Night’s Dream. I played Titania and had to be suspended in the air on a piece of scenery with Bottom. Super scary and fun!!

I also really enjoyed the cowboy production of Don Pasquale. I particularly enjoyed using the gun in my big aria. Christopher McBeth gave me some good advice; he said to never point at the audience—you never know who will shoot back.

As a young adult, I saw the Barber of Seville at Utah Opera, directed by David Gately. It has a slow-motion fight scene in it. I had never laughed so hard at an opera before I saw this production! Then, a few years ago, I got to play Rosina in Utah Opera’s Barber of Seville. The slow-motion fight scene was incorporated in the production! It was so much fun!

How do you prepare for performance night? Do you have any rituals that help you get in the character’s frame of mind?

Preparation for a performance night starts the night before. I have to make sure I have enough sleep. That means my husband is on child patrol. If anyone needs a drink of water or comforting, he gets to do it. In the morning I hydrate like crazy… you would be surprised how dry your mouth feels when you get on stage!

I try to stay busy during the day to keep my mind occupied. My character preparation has happened in the previous weeks and if I think too much about the evening’s performance it messes with my psyche. At that point, I just need to get out on stage and do it! I have to make sure I eat a dinner with enough calories to get me through the show.