Every Voice Tells a Story – Memories of the Utah Opera

Every voice tells a story—and for 40 years, members of our community have been telling ours. Here are some memories of the Utah Opera people have shared with us over the years. 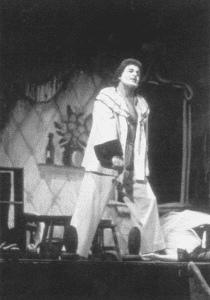 While we have had many wonderful experiences during our association with the hundreds of fabulous people we have met at Utah Opera. Here are two of our favorite memories:

The first is when Carol was president of the Opera Guild, the VIP receptions were held after the first performance and on the stage. People could see the sets up close and personal. Also, refreshments were served on stage, so the decorations from the Founders’ Room were moved there. Carol was assigned the task of carrying a large two-piece vase full of flowers from upstairs to the backstage entrance and onto the stage. As she and Glade Peterson were running to the stage, the top piece of the vase came off and flew over her head. Running right behind her, Glade caught the piece in stride and they didn’t break a step or rhythm. It was a sight that could only have happened in a movie scene.

For myself, I must say that my experiences as a super in 28 operas were a composite event that I will always cherish. The supers are given some of the most wonderful costumes to wear, are on stage with some of the best artists and people in the business, and develop lasting friendships with many of them. This is my most memorable experience.

Of course, going to the performances has to be among the most obvious and memorable activities that we have done. The associations we have with fellow audience members, staff, and others are cherished and can never be understated. Our lives have been enriched beyond measure since the day Glade asked us to become involved in his marvelous dream.

He gathered singers along the way and the money in order to do it. La bóheme was the very first opera that we did and I’ll never forget it as long as I live. I was up in a tree picking apples at my home and Holladay, and I get a call from Glade and he says “Billie, in 2 hours I want you to be down here for an audition.” and I said 2 hours? I’m picking apples! So I went down and I just became Mimì….

[Glade] was a very charismatic man and people… he was drawn to people. And they were drawn to him. And this glorious voice, I mean he would melt you. But I think that Glade just had a certain home town feeling that really appealed to people like the legislature, and so I think that’s really what got this thing off the ground.

I was unemployed, looking for a job when I saw an ad for chorus members for the nascent, Utah Opera Company. I had never heard an opera let alone sung in one. I met Glade Peterson in a room adjacent to Daynes Music where I was informed that this was a volunteer opportunity not a paid gig. After an audition he wished me luck on my job search and invited me to join the chorus. I found a job and joined the chorus under the direction of Bob Zabriskie in the attic of the U of U music building. From there I sang through four seasons beginning with La bóheme in English and ending with La bohème in Italian. In those four years I sang in fourteen different productions. I started in Kingsbury Hall and ended in the Capital Theater. Glade was a great leader treating even the chorus with respect and friendship. Glade made opera accessible and appealing to Utah and me.

Kathleen Sykes is the digital content producer for Utah Symphony | Utah Opera. When she’s not writing articles, she’s busy snapping photos and posting them to @utahopera.