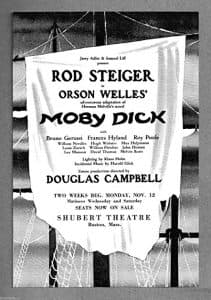 Many of us have not read Moby-Dick, but all of us know at least a little something about this American classic. Captain Ahab’s doomed quest connects with so many of us on a visceral level. The expression “White Whale” is so pervasive in our world that it’s even earned a place on Urban Dictionary, a place often associated with NSFW terminology and current slang. Fair warning: if you happen to search the term on that website, take care with how far you scroll—you will definitely encounter several off-color usages.

In our everyday lives, an obsessive quest for anything elusive, unattainable, or ephemeral is a search for a “white whale,” whether it be true love, physical perfection, or some other object difficult to pin down. I found it interesting to take note of some of the ways this epic tale has inhabited our culture.

Moby-Dick has had many an outing on screen and stage, prior to its operatic version. Orson Welles created a theatre version in which very few props and sets were used. Actors used brooms and sticks as oars and telescopes, and the white whale only existed in the imagination of the cast and audience.

Then there’s the famous film version from 1956 starring Gregory Peck as Ahab, in a much more literal depiction of the novel’s events. And Patrick Stewart created an even more obsessed portrayal of Ahab in a TV mini-series in 1998.  Ray Bradbury wrote a “loose radio adaptation” in which the late British actor Christopher Lee portrayed a space commander in pursuit of the comet that caused his blindness.

The 103rd episode of the animated series Futurama was entitled “Möbius Dick” and tells of a killer space whale that drags the ship Planet Express into the fourth dimension. 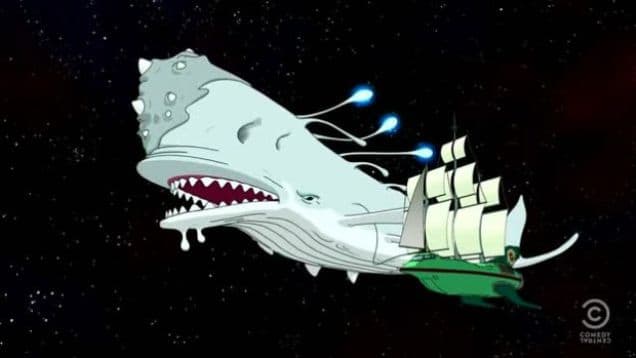 More recently, Ron Howard told the story of the Essex, a whaling ship whose real-life experiences served as the inspiration for Melville’s novel, in Howard’s 2015 film In the Heart of the Sea. 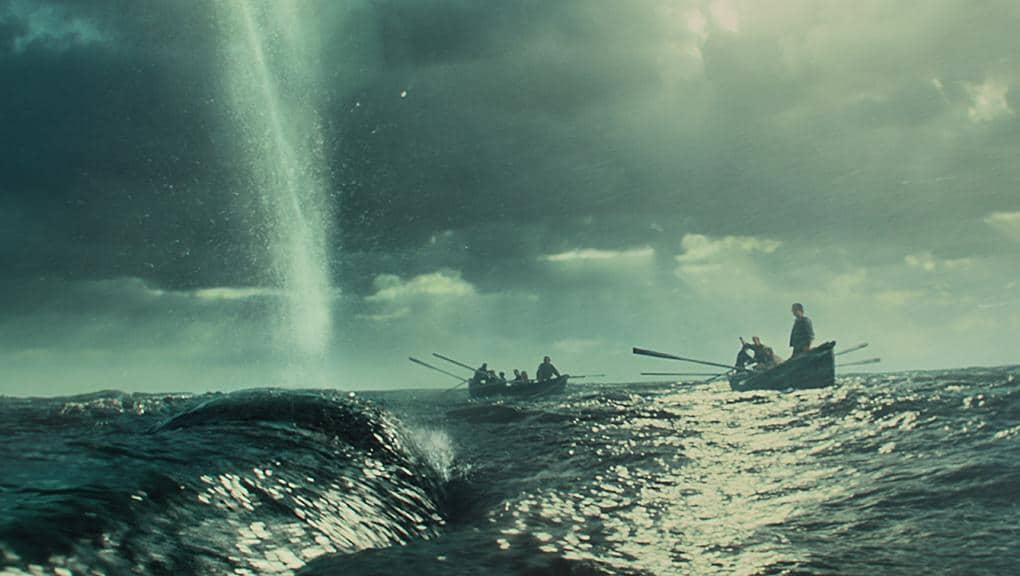 As a sci-fi aficionado, I’ve been quoting Moby-Dick for decades, at least a few lines thereof. Arguably the greatest big-screen installment in the adventures of the original crew of the Enterprise, Star Trek II: The Wrath of Khan features one of the great villains in movie history, Khan Noonien Singh, as he seeks revenge against our hero, Captain James T. Kirk. Khan’s final words are those of Ahab, as delivered by the Mexican actor Ricardo Montalbán.

One of the main characters in the TV series Battlestar Galactica (both versions) is named Starbuck—perhaps the search for Earth is that series’ White Whale.

Then there are the numerous artists who have found inspiration in this story, despite Ishmael’s insistence that he “must needs conclude that the great Leviathan is that one creature in the world which must remain unpainted to the last.” Jackson Pollock completed two paintings inspired by the novel including this example from 1943. 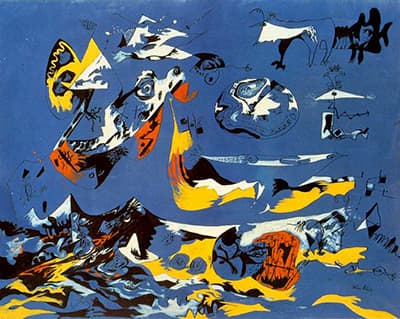 Frank Stella, after taking his sons to the aquarium in Coney Island, began a massive series of artworks in 1985 that was completed in 1997. All of the 138 works have a title drawn from a chapter in Moby-Dick and include paintings and massive three-dimensional creations. I was fortunate enough to view several of these works as part of a recent Frank Stella retrospective at the Whitney Museum of Art in New York City.
Beginning in 2009 a self-taught artist Matt Kish, enthused by the novel, decided to do an artwork each day related to one page from his Signet edition of the novel, which ran 552 pages! He created his art on discarded scrap of paper, using watercolors, ballpoint pen, crayons, and other “casual” implements. He shared his journey via blog posts and he published the drawings in a 2011 collection titled Moby-Dick in Pictures. 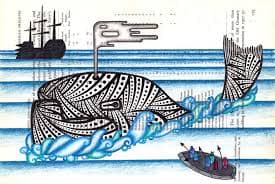 It’s possible you’re enjoying one of the most common Moby-Dick references as you read this article. That little Seattle coffee shop that now has locations worldwide was originally to be called Pequod’s, after the doomed ship in Melville’s novel, but that brand name was nixed in favor of the first mate of the Pequod, Starbuck.

Was the White Whale, in that case, a perfect cup of coffee? Speaking for myself, I’m constantly engaged in this quest. 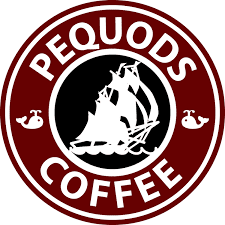