I have to be honest, I never read either The Grapes of Wrath or Moby-Dick in school. We didn’t cover Melville at all, even in my AP English class, and in college, I took British Literature to fulfill my core requirement. I really have Utah Opera to thank for filling these giant holes (whale-sized, dare I say?) in my education. In prepping for both 2007’s presentation of Ricky Ian Gordon’s setting of Steinbeck and this month’s presentation of Moby, I finally buckled down and tackled these monoliths of American literature, and am I glad I did! Perhaps by waiting until I was an adult and pursuing these tasks more or less voluntarily, I was able to experience the genius of these novels in a different way.

When Dallas Opera invited Jake Heggie, in 2005, to create a contemporary opera for its 2009-10 season to celebrate the then-under-construction Winspear Opera House, Jake consulted with Terrence McNally, playwright and his librettist for Dead Man Walking. McNally responded, “The only story I’m in interested in doing is Moby-Dick.” McNally and Heggie were bold fellows, to think that they could distill such a novel into a reasonable-length opera. Even a film adaptation doesn’t need as much culling since one can speak lines faster than one can sing them. In addition, how can this leviathan of an antagonist, this white whale of a novel, be adequately covered in a stage work?  Thankfully, our team did the hard task of reading and re-reading the novel in order to bring the story to life in a concise manner. Together McNally and Heggie made the choice to eliminate the early chapters on land and decided on voice types for many of the characters (Ahab as a dramatic tenor, Pip as soprano pants role). In 2007, Terrence McNally withdrew from the project for health concerns, and Jake invited Gene Scheer, his librettist for the 2006 opera To Hell and Back, to see the project through to completion. 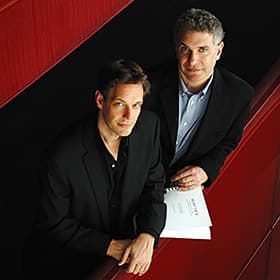 Ahab and his insane quest are what likely come to mind when we think of Moby-Dick, and they do dominate the opera as well, but Scheer and Heggie tell the stories of Starbuck, Queequeg, Pip, and “Greenhorn (Ishmael)” with equal care and attention to detail. Melville’s novel is narrated by an older Ishmael, as we discover in the first paragraph of the novel: “Some years ago­–never mind how long precisely…I thought I would sail about a little and see the water part of the world.” For the libretto, the action centers around a naive Ishmael on his first voyage to sea. An important and bold choice was to take the novel’s iconic opening sentence, “Call me Ishmael,” and make it the final words of the opera. This required a new name for the Ishmael character, so he gets a title, really, rather than a name, that of “Greenhorn.” The Oxford Dictionary defines greenhorn as “A person who is new to or inexperienced at a particular activity;” the word often has a demeaning connotation. Experienced sailors would haze the novice crewmen, calling them “Greenie,” and assigning them the least desirable shipboard tasks.
Heggie and Scheer retained the early decision to eliminate the chapters that take place on land–these moments in the novel are where the relationship between Queequeg and Ishmael is built, as well as where some of the religious, cultural, and psychological conflicts are established. Scheer instead creates early scenes aboard the Pequod where this same information is shared and the friendship is built, albeit much more quickly. Keeping the action confined to the Pequod and its whaleboats also add heightened urgency to the story, thanks to the sometimes claustrophobic sense of intimacy that exists in such a microcosm.

Scheer used scenes from the novel, often quoting Melville’s language verbatim. He also “invented” scenes both for musical reasons, and to expand the story. Queequeg’s opening chant, “Fune ala,” is an ancient Samoan chant that Gene Scheer found in a library, completely appropriate for the religious quest of this mysterious Polynesian character. Heggie was an equal partner in the creation of the libretto, editing text and adding his own words. 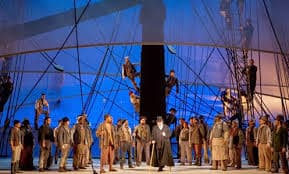 The novel is known (and sometimes feared) for the lengthy didactic chapters about whaling, whale hunts, nineteenth-century economics, and society. These chapters are interesting enough but do not serve to propel the action forward. Scheer brilliantly distills much of the information about whale hunts into a whaling lesson taught by Starbuck and Queequeg to the rookie Greenhorn. It’s a wonderful solution, presenting information that could have been dry, but instead became a compelling bit of story-telling (and a little bit of hazing) from an experienced harpooner to a novice whaleman. The next scene, in which a pod of whales is sighted, is a condensation of several sightings described in the novel, and its chronological placement is not a literal adherence to the novel’s timeline.

In Act I, scene 4, Scheer uses material from the novel for Ahab’s Sunset aria (“I leave a white and turbid wake”), adding words of his own for a duet for Queequeg and Greenhorn that builds to a quartet that adds Starbuck. The tender moment after Pip’s rescue is another invented scene and gives rise to Greenhorn’s awakening as depicted in the Try-Works Aria near the end of Act I.
These are just a few instances of how this epic American classic was “boiled down” to a manageable size for the opera. Those interested in a more complete walk-through of the process from novel to opera stage should consult Robert K. Wallace’s chronicle of the opera’s creation, Heggie and Scheer’s Moby-Dick: A Grand Opera for the 21st Century, published in 2013 by the University of North Texas Press.

And, in the interest of full disclosure: As I type this, we’ve staged through Act I of the opera, but I’m still only a quarter of the way through the novel…I’m giving myself until opening night!