ACT ONE: On board the Pequod, one week at sea out of Nantucket

Captain Ahab gazes out to sea in the early morning hours while his crew sleeps below deck. Harpooneer Queequeg, a South Sea Islander, wakens Greenhorn (Ishmael in Melville’s novel) with his praying. “All hands” is sounded and the ship’s sails are raised while first mate Starbuck and third mate Flask discuss the Captain’s enigmatic absences.

The crew sings of whaling and fortunes to be made and Ahab appears to tell them that the real reason for the voyage is to hunt for Moby-Dick, the white whale that severed his leg.  He commands that no whales are to be taken until Moby-Dick is sighted, and nails a gold coin to the masthead for the first man who sights the monster. All cry out “Death to Moby-Dick.” Starbuck finds the mission to be blasphemous, but Ahab is unmoved.

Starbuck tutors Greenhorn in the art of whaling but is overcome with emotion, fearing he may never again see his wife and son. Suddenly, Stubb sights a pod of whales and Ahab arrives to forbid the hunt: Moby-Dick is the true target. The Pequod sails on, with Greenhorn and Queequeg as lookouts.

Ahab is oblivious to the splendor of the scene before him.  Starbuck fears that Ahab has become unhinged and is truly mad. 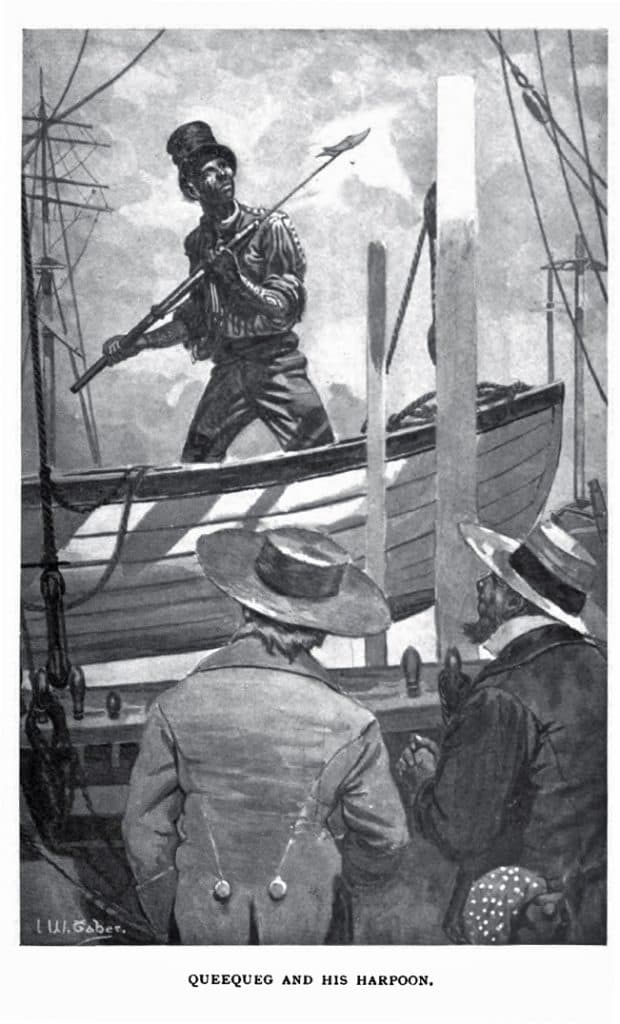 Months have passed with no whales captured, and boredom has set in.  Stubb teases Pip, the cabin boy, but too much caviling within the crew incites a brawl.  Fortunately, a whale is sighted, and Starbuck convinces Ahab that the men must hunt. In the process, a whaleboat capsizes and young Pip goes missing.

The men render the slaughtered whale, and the oil is poured into leaking barrels.  Pip is sorely missed and feared dead. Starbuck urges Ahab to put into the nearest port to repair the leaking barrels. But Ahab thinks only of Moby-Dick, and a violent quarrel with Starbuck ensues. As Ahab points a gun at Starbuck, a cry goes up that Queequeg has rescued Pip.

Starbuck, still fearing he will never again see his family, stealthily enters Ahab’s cabin and considers killing the Captain. He finds he cannot and departs.

As a storm approaches, the crew sings while Greenhorn and Queequeg talk of voyaging together to the Pacific Islander’s home. Queequeg suddenly falls ill and is taken below deck. He tells Greenhorn that he is dying and requests a coffin be crafted for him.

Ahab, who thinks always and only of sighting Moby-Dick, demands to be lifted aloft to keep a lookout.  A massive storm surrounds the ship while lightning bolts bounce around the deck. When St. Elmo’s Fire engulfs the mast and the sails, Ahab encourages the crew by claiming it is a sign from Heaven.

The storm has passed. From a whaling vessel nearby, Captain Gardiner solicits the Pequod for help to find his twelve-year-old son who has been washed overboard.  When Ahab stonily refuses, Pip calls out that he, too, is lost and cuts himself, spilling blood on Ahab. As the Pequod sails on, Ahab baptizes his harpoon with Pip’s blood. Below deck, Greenhorn considers the insanity that has afflicted those on board the Pequod.

On deck, Captain Ahab reflects to Starbuck about his forty years at sea and wonders if his life’s journey has had purpose. Sensing a kindred spirit in Starbuck, Ahab is about to agree to return home to Nantucket when he spies Moby-Dick. He orders the whaling boats lowered, and the hunt is on. Ahab insists that Starbuck remain behind on the Pequod.

The great whale destroys two boats, tossing men into the sea, and then assails the Pequod herself.  All crew members are lost save Ahab, who ferociously attacks the whale, only to be dragged down under the waves.

Days later, Captain Gardiner finds Greenhorn half dead, lying on top of Queequeg’s floating coffin. He is the lone survivor of the ill-fated voyage.