Humans have hunted whales for millennia; Norwegian whaling dates back to 4000 B.C.E., and whale bones and petroglyphs depicting whale hunting were discovered at the site of the Bangudae Petroglyphs in Korea dating even further back. 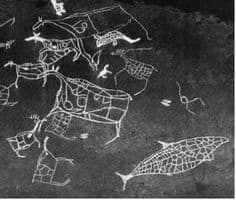 Other whaling cultures include the Basque, Inuit, and Japanese, thus it is clear whaling has always been a global industry. Early whaling societies used every part of a whale with little to no waste. The whale’s flesh, skin, and organs provided sustenance, baleen (the keratin substance that hangs from the roof of the mouth of toothless whales) was used for roofing and basket-making, and the bones were used for tools and decorative items.
European whaling began in the Middle Ages and Renaissance, primarily sourcing baleen and whale oil for fuel and light. Whaling crossed the Atlantic to America during colonial times, and New England was the center of the whaling industry through the nineteenth century. At its peak in 1858, the American whaling fleet numbered 199 ships. Fossil fuels eventually replaced whale oil as a source of light and energy, but for decades, New Bedford, Nantucket, and other New England ports were some of the busiest and wealthiest in the world. The final whaler, the John R. Mantra, departed New Bedford in 1927.
Hunted whales included nine species with varying characteristics, both baleen species and toothed whales. Sizes ranged from the immense blue whales, the largest mammal on the planet, to the smaller gray whales; the sperm whale immortalized in Moby-Dick is a toothed whale, far more aggressive than the baleen whales. In the following diagram, take note of the battering-ram shape of the sperm whale’s head, as opposed to the gently sloped heads of the baleen whales. In 1820 a sperm whale rammed and sank the whaleship Essex, an event that inspired Melville’s novel.

The earliest methods of whale hunting involved “herding” of smaller species of whales, hoping to beach them and make the kill on land. The next type of whaling involved harpoons attached to a “drogue,” such as a sealed drum or inflated seal bladder. As the whale fled the hunters, the buoyancy of the drogue would prevent the whale from diving and contribute to its exhaustion.
American whaling was initially conducted from shore, with watchtowers set along the coast to watch for whalespouts. Whaleboats would embark from shore to hunt the cetaceans and would bring the carcasses back to shore for rendering and processing. As the grounds near shore became overfished, whale hunting moved further out to sea, but processing still took place ashore. Whaling voyages expanded across the Atlantic, and eventually rounded Cape Horn to ply the Pacific Ocean. A voyage could last anywhere from a few months to 3 years, and whaleships were provisioned for years of travel. Ships could visit ports for restocking and trading, and would even meet one another on the open ocean for a “gam” to trade news, supplies, and send mail home to their families. Whaling crews were incredibly ethnically diverse, with white Americans often in the minority. Polynesians, Native Americans, and Africans were all represented in these crews.
A whaling ship was built for strength, seaworthiness, and industry. They were built wide to hold a large number of casks of oil, as well as the provisions needed for a lengthy voyage. High atop the mastheads were thin “cross-trees,” where men were stationed from dawn until dusk in two-hour shifts to search the distance for whale sign. Metal hoops were added for additional safety during this sometimes tedious duty.
Often a reward was offered to the man who first sighted a whale that was eventually captured and processed. At midship was the try-works, where the whale blubber was rendered into oil over carefully controlled fires. Melville’s narrator describes the spectacle of the lit fires as a “red hell” or a “fire-ship on the sea.” After all useful material was extracted from the whale, including blubber, baleen, bone, spermaceti (a highly prized source of fuel), and ambergris (used in perfume), the carcass was released to the ocean. 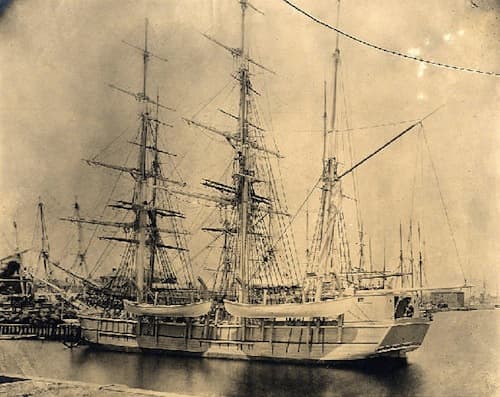 Each whaling vessel carried at least four smaller whaleboats that were designed with both pointed prow and stern, thus able to be moved in either direction. When not in use, the boats swung from davits along the edge of the deck. At the sighting of whales, announced by the masthead watchmen with a hearty “There she blows!”,  the whaleboats were lowered into the ocean, manned by a ship’s mate (boatheader), harpooner (boatsteerer), and four crewmen who provided the muscle for propulsion.
As a whale’s eyes are located on either side of its immense head, it has notably poor eyesight,
but it is able to locate prey (and hunters) via its incredibly keen sense of hearing and its use of sonar impulses. A whaleboat crew would remove their shoes and speak only in whispers; even the slightest scrape of leather against a wood plank could alert a whale to their presence. The harpooner was a member of the rowing crew until the boat neared its prey; then he would take his place in the bow of the boat.  His harpoon was barbed at the “business end” and attached to the boat by a long line, stored in a tub astern. 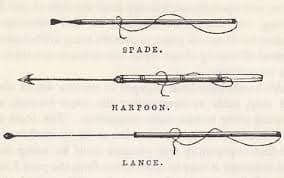 As the whale surfaced, the harpooner would thrust his barbed weapon into the massive animal. Immediately the command was given for the crew to row away from the whale, as the terrified whale would thrash about in an attempt to rid itself of the harpoon. Then the whale would dive in search of safety, and the line attached to the harpoon unfurled. Ten to twenty fathoms long (60-120 feet), the line was carefully coiled in a wooden tub; as the harpooned whale dove away from the danger, the line rushed out at dizzying speeds, controlled only by a loggerhead post in the stern and a notch in the bow of the boat. Men could lose limbs or their lives if they were caught in the line as it deployed.
After the whale was successfully harpooned, the harpooner and ship’s mate traded places, no easy feat when the boat was being dragged at speeds up to twenty miles per hour by the panicked beast. The harpooner steered the boat during this wild “Nantucket sleigh ride.” 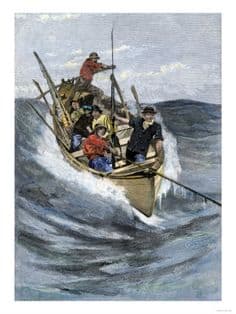 Sometimes the whale could get away during the chase, through its strength and speed, or due to a poorly placed harpoon strike. If the whale remained caught, it would eventually exhaust itself, and the boat could move closer for the mate to deal the death blow with his lance. The death throes of the whale created yet more danger for the small boat. Once the whale was still, a long row back to the ship was ahead for the crew, towing tons of whale destined for the try-works onboard.

Our production team of director, costume designer, set designer and lighting designer spent the past three years researching all aspects of American whaling, consulting numerous sources on the subject as well as making a visit to the Whaling Museum in New Bedford, Massachusetts. 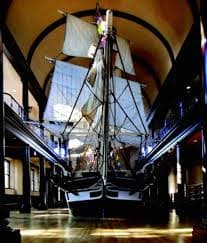 The challenge to depict this massive subject on stage, as one might imagine, is daunting. The audience will recognize exact depictions of certain items such as historically accurate harpoons and lances, or the large piece of whale blubber created by the Utah Opera prop shop. However, some of the larger images, like the Pequod, her whaleboats, and Moby-Dick himself will be represented in a more figurative sense.