The Musical Story of "Gianni Schicchi"

“Give me the will.” He paces back and forth, reading it; the pizzicato cellos and basses could reflect his pacing, while violas and bassoon recall the “perky” theme, which could describe the silent excitement of the relatives. Suddenly he stops. “Nothing to be done!” The lovers bid farewell to their May-day wedding. More pacing; more reading, but the verdict remains the same. Another farewell to the May-day wedding. “But!!!!” Four bars of orchestral slowing; the tension in the room is almost palpable. “Well?” whisper the relatives.
The “sighing” figure returns to accompany Schicchi’s order to Lauretta to wait on the terrace outside and feed the birds (chirps from the flute, harp, and two 1st violins) – alone!
No-one knows that Buoso has died? No one. The funeral drum returns and is joined by the timpani; harp; low strings. Good; no one must know yet. No one will know. The servants? Since he got worse, no one has been in the room. He tells Marco and Gherardo to take the body into the adjoining room; Simone, Betto, and Rinuccio are to take the candlesticks into another room; the women are to remake the bed. A knock at the door. All freeze. It’s Doctor Spineloccio. Tell him that Buoso is better, but resting, and Schicchi goes behind the bed-curtains; Betto closes the shutters, to darken the room.
The relatives hold the door ajar, and we hear Spineloccio (“in a nasal voice with a Bolognese accent) ask permission to come in. (Listen to the weird chords from the woodwinds!) He’s better, the relatives tell him. Really? How amazing is modern science; let’s have a look at him. (The weird chords are now in the strings.) He’s resting. Schicchi, imitating Buoso’s voice (which initially jolts the relatives), greets the doctor, says he has risen from the dead but needs to rest, and please come back this evening. His voice sounds healthier, notes the doctor; no patient of mine has ever died, and all credit must go to the medical school at Bologna!
The door shuts, Schicchi reappears. “Was my voice like his?” “The exact same!” Winds, brass, violas, and cellos burst into the joyful fanfare we heard early in Rinuccio’s aria. Victory, sings Schicchi: don’t you understand? They don’t. Idiots! he yells at them. 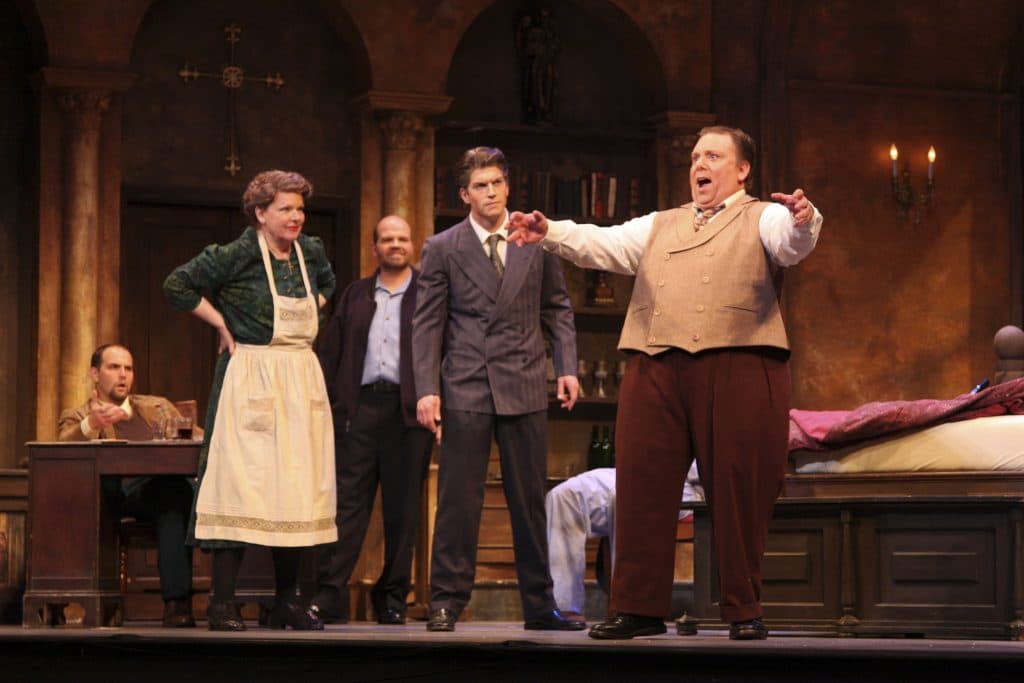 Violin tremolos. Bassoons; violas; and cellos mirror Schicchi’s line as he tells them to run to the notary. Now it’s just violas and cellos who outline the melody, with rushing upward scales from the clarinet and then the flute. More instruments join the excitement. Whoever goes to the notary is to tell him, says Schicchi, to hurry to Buoso Donati’s house; he’s worsened and wants to dictate his will, so bring everything necessary. Hurry, or it’ll be too late! The notary arrives. The music calms down: cellos and basses, together with the timpani, recall the funeral drum’s rhythm – which makes its own “ta-ta-ta-dum” contribution to the sound-world; the bassoon sighs twice as slowly as we’ve yet heard. The notary enters a darkened room; in the bed, says Schicchi, he can just about make out the figure of Buoso. Between the night-cap and the handkerchief on his mouth is a nose which looks like Buoso’s, but actually is mine, because it will be me in the bed. With another voice, I will imitate Buoso making his will. People, he concludes, this crazy idea of mine will challenge eternity! (And here he speaks truth, for the “real” Gianni Schicchi is to be found in the “Inferno” section of Dante’s “Divine Comedy”!)
What a brilliant example of musical characterization is this aria! Breathlessly summoning the notary is typical operatic “hurry-up” music. But when it comes to the notary assuming that the vague shape he sees in the bed is actually Buoso, Gianni’s vocal line slows down and outlines what theory people call a dominant 7th chord (hear the opening word of “Happy Birthday”: that’s that); but Puccini’s pizzicato string chords seem to contradict the dominant 7th suggestion, but he insists he means it in the following five bars when a flute and a trumpet echo Schicchi: it’s all very murky! Then, describing the night-cap and the handkerchief, Schicchi launches into a tune which could be a slowed-up version of a popular song designed to lull the relatives into entrusting him with Buoso’s new will; it certainly shows Schicchi’s sly cleverness: he’s almost laughing in those rests, sure that he, the outsider, has outwitted the stodgy Donatis. And it’s a show-piece for the singer! Listen how the orchestra piles on the instrument after instrument, until everyone is playing triply very loud (with an instruction to get louder!) as he sings a high G! 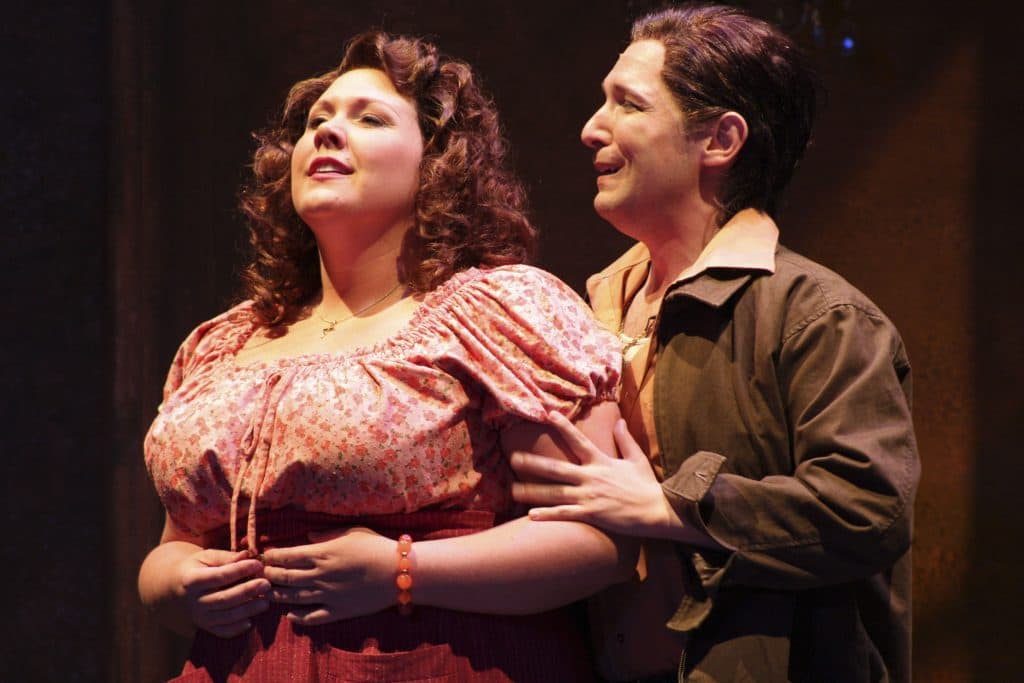 The orchestra stops. Schicchi speaks to us. Could, he asks us, Buoso’s money have been better spent, indicating the lovers? Muted strings, while clarinets recall the end of Rinuccio’s aria. For this I was sent to hell, which is OK; but, with Dante’s permission, at least grant me, (indicating applause) extenuating circumstances.
The full orchestra is triumphant as the curtain falls on the second greatest Italian operatic comedy.