Bring on the Champagne! 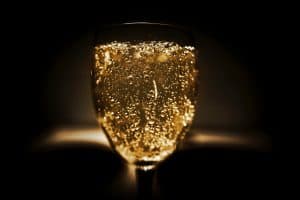 In fifty years or so
It’s gonna change, you know
But oh, it’s heaven
Nowadays

In the musical Chicago, the heavenly life extolled by Roxie Hart and Velma Kelly — full of bawdry, booze, and bullets — seems about as far removed from the hyper-refined elegance of old Vienna as you can get. But look more closely and you’ll find that they are strikingly similar. As far as the heroine and hero of Die Fledermaus are concerned, the lines “You can even marry Harry / But mess around with Ike” might as well be the scouts’ oath.

Rosalinde and Gabriel von Eisenstein are typical of the pleasure-seeking aristos we see at play in many Viennese operettas. For them, the appearance of matrimonial propriety is crucial; the reality of their marriage vows is another matter entirely. Gabriel and Rosalinde can’t wait to duck out on each other for some not-so-innocent flirtation, and in their pursuit of fun we can detect the same desperation that haunts those insistent questions in Chicago: Isn’t it grand? Isn’t it great? Isn’t it swell? Behind the bubbly, the gowns and the gaiety lurks a terror of things to come: “But nothing stays / In fifty years or so / It’s gonna change, you know.”

Fifty years seems an ironic choice of time span when we note that fifty years after the premiere of Die Fledermaus in 1874, Austria and its neighbors were in ruins in the wake of World War I, with the Weimar Republic floundering in Germany and the horrors of Nazism on their way. Somehow it was as if the Viennese, like Roxie and Velma, knew what was coming. The gaiety of Viennese operetta, with its wit, glitter and most of all its swirling waltzes and polkas, was an assertion of ebbing values in the face of dread. Author Paul Hoffman, who had been Vienna bureau chief for The New York Times, captured this ambivalence in his book The Viennese: Splendor, Twilight and Exile:

The city that inspired Mozart, Beethoven, and Schubert, the capital of Gemütlichkeit, of hand-kissing and the waltz, of coffeehouses and wine taverns in the green, of whipped cream and the annual opera ball, has long had one of the highest suicide rates in the world. When Sigmund Freud started investigating hysteria and other neuroses in the late nineteenth century, he found an ominous welter of case histories in the seemingly placid city on the Danube.

Well, if you couldn’t be analyzed by Sigmund Freud, you could go to that popular operetta Die Fledermaus…then just sit back and enjoy the Gemütlichkeit and hand-kissing, the pranks and flirtations, as expressed in a chefs-oeuvre of waltzes, polkas and sumptuous vocal display. There is something luxurious and perhaps therapeutic about this effervescent music and its sheer abundance of melody. Die Fledermaus raises Viennese nostalgia and Viennese dance music to their highest level.

Now, let’s get our Strausses straight: Die Fledermaus was composed by Johann Strauss Jr., who in his own lifetime was less famous than his father. They were only two of a dynasty of composer-bandleaders who built thriving businesses on the Viennese penchant for social dancing. A waltz by the elder Johann may sound delightfully indistinguishable from one by his son Johann Jr. or by Johann Jr.’s prominent composer-siblings. But the Strausses all had two crucial elements in common: the city of Vienna and the Viennese waltz, which they jointly perfected in the form we know today.

Both successful composers and bandleaders, Johann and Johann Jr. engaged in a long and surprisingly bitter rivalry. In his day, it was the elder Johann who was known as the “waltz king,” a title now accorded to his son. But Johann Jr. lived longer and wrote more of the inspired waltzes so familiar to modern listeners the world over — waltzes like “On the Beautiful Blue Danube.” Born in 1825, he composed Die Fledermaus when he was 48.

Though based on a French farce, Die Fledermaus occupies a special place in Austrian national culture, representing the quintessence of 19th-century Viennese elan. In its plot — a typically vapid confection of pranks, mistaken identities, flirtation and champagne — we see a social order in which appearances count far more than reality: With the bourgeois Eisenstein about to be escorted to jail for an eight-day sentence incurred for insulting a bureaucrat, his wife Rosalinde’s amorous Italian singing teacher, Alfred, is hiding in their drawing room. Because his presence could appear to compromise Rosalinde’s honor, Alfred agrees to take her husband’s place when the prison governor arrives. This frees Eisenstein to attend a ball that night at the opulent digs of Prince Orlofsky, where his wife and his maid, Adele, will be in attendance — both in disguise. It’s all part of the master plan of Dr. Falke to exact revenge on his friend Eisenstein for the aftermath of a previous revel when Falke was himself disguised as a Fledermaus (bat) and abandoned in a drunken stupor.

Dizzy yet? Look closely at this glittering world and you may discover some similarities between 19th-century European operettas and the dazzling, escapist movie musicals of the 1930s, or even more recent television sitcoms. Everybody has money, but nobody seems to work. Beautiful clothes and elegant furnishings are everywhere. The only thing more important than being a good party guest is being a good party host. It’s all great fun. But look harder and you may also see a core of decadence: Marital fidelity is honored mainly in the breech. Children and family life are nowhere to be seen. Nothing matters so much that it need be taken seriously, including the law. If there is a philosophy behind all this laissez-faire enjoyment, it is sung by Orlofsky’s party guests at the end of Act I: “Glücklich ist, wer vergisst, was nicht mehr zum ändern ist.” A very rough translation: If you can’t do anything about it, let it go.

The overture to Die Fledermaus whisks us into this world with crisp chords and whirling arpeggios. This energetic opening, which requires alert players for razor-sharp attacks, captures all the gaiety that is to come. The now-familiar melodies flow like wine. While the music sparkles on its own, once you’ve seen Die Fledermaus all those addictive tunes will forever be associated with plot points in the exuberant comedy. For example, the chimes we hear early on signify the hour when Prince Orlofsky’s eagerly awaited ball is set to begin; later we hear the higher, bell-like chimes of the fancy repeater watch that Eisenstein’s wife, in disguise, will win from him through some skillful flirting. It’s no accident that those repeating bells evoke the rhythm of a chase. And when the orchestra seems to titter on three successive notes — that’s another lady in disguise, the chambermaid Adele, feigning bemused outrage in her “laughing song.”

It all flows seamlessly, with complete naturalness. But listen carefully and you’ll notice that these delicious melodies are actually set to dance rhythms that had very particular meaning for the Viennese of the 1870s — at least, the kind of upper-crust Viennese who might be invited to the palace of an expatriate Russian prince along with the Eisensteins and the Falkes. To us, the drowsy triple rhythm of “Glücklich ist” sounds like a waltz; it is actually considered a “polka-mazurka.” (The mazurka is also a dance in triple rhythm.) When we hear the halting triple-rhythm of another chorus, “Brüderlein und Schwesterlein,” the tempo is similar but the dance is a simple mazurka. At that point in the alcohol-soaked evening, that’s about all Prince Orlofsky’s guests can handle.

Hearing these themes, we are almost rendered breathless; the energy does not flag even when the pace slows. But once the action of the operetta begins, the music is more closely calibrated to the pace of the action and the drinking. Die Fledermaus is not exactly a cautionary tale, but it does all start with a practical joke, move on to a party, and end up in jail. All ends happily, but the moral, if there is one, is hard to find. To this day, the Viennese don’t sing “Auld lang syne;” they sing “Glücklich ist.”