Dirty Dancing: “The Waltz King” vs. “The King of Rock and Roll” 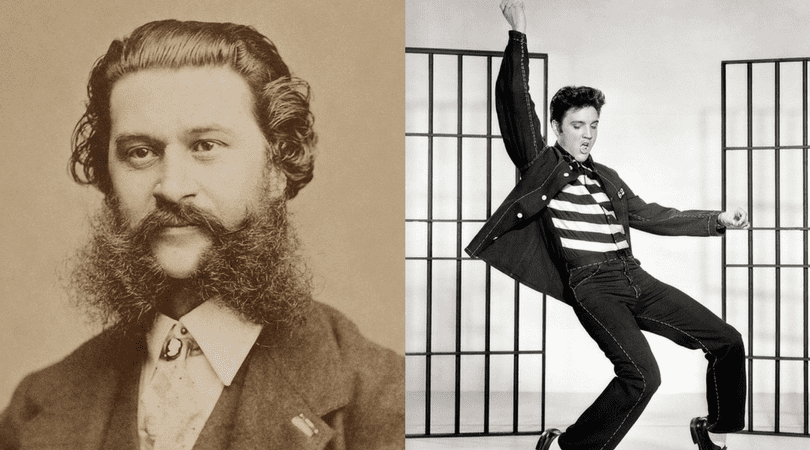 Ask anyone you know if the waltz is a “dirty” dance and see what they say. I did on Facebook and here are the results:

But when the waltz was emerging (evolving from the German folk dance, the ländler, and the much statelier court dance, the minuet), it was quite a scandal. Imagine it! A man and a woman exclusively partnered, aware only of each other, in close physical contact, with the man’s foot even passing beneath the woman’s dress! An 1816 article in The Times of London described dominant (if not popular) opinion about the waltz:

National morals depend on national habits: and it is quite sufficient to cast one’s eyes on the voluptuous intertwining of the limbs, and close compressure of the bodies, in their dance, to see that it is indeed far removed from the modest reserve which has hitherto been considered distinctive of English females. So long as this obscene display was confined to prostitutes and adultresses we did not think it deserving of notice; but now that it is attempted to be forced upon the respectable classes of society by the evil example of their superiors, we feel it a duty to warn every parent against exposing his daughter to so fatal a contagion.

And don’t forget the twice-sold-out 1797 pamphlet entitled Proof that Waltzing is the Main Source of Weakness of the Body and Mind of our Generation whose claims are fairly well outlined in the title alone. 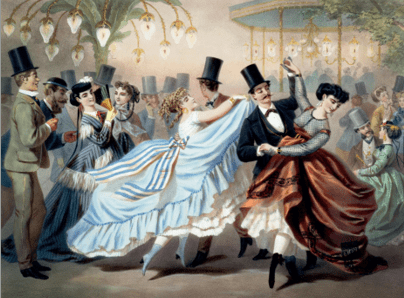 “The waltz is the loveliest blossom of our ballroom, perhaps the most satisfactory dance ever achieved by man.” –Dr. Lloyd Shaw, folk dance expert

Dr. Shaw’s seeming oblivion to moral danger reflects the opinions of the majority of my Facebook friends, who are either: 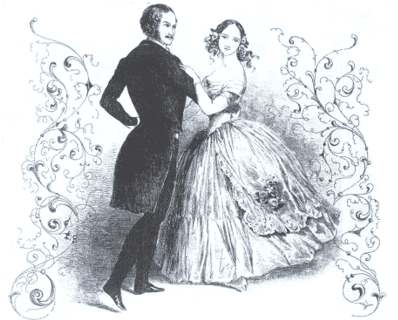 The advent of the waltz in polite society was quite simply the greatest change in dance form and dancing manners that has happened in our history.

To understand her point, we have to remember what dancing was like before the waltz. For centuries, dancing was mostly a group activity (you know, the kind we see in the Pride and Prejudice movies) with everyone in the room participating, changing partners repeatedly, and rarely making any physical contact with the opposite sex beyond just the hand. It’s more like line dancing. But after the “Boot-Scootin’ Boogie” and the “Electric Slide” are over, most modern people go back to their partnered dances. Let’s face it, after the waltz swept the western world, we began to think of dancing as a partnered activity involving physical contact, designed to foster social interaction between two people. Well, we can say “thank you” to the waltz for that notion. It took what was scandalous and made it the norm.

The composer of Die Fledermaus, Johann Strauss II, was widely known as “The Waltz King,” as was his father Johann Strauss Sr. In fact, the whole family was a waltz dynasty, with brothers Josef and Eduard critical parts of Johann Jr’s musical business. But by the time Johann Strauss Jr. was composing his over 500 opus numbers, instead of viewing him as a purveyor of corruption and moral degradation, his hometown of Vienna, Austria, made him their cultural king:

“Johann Strauss is Austria personified. All of Austria is in his camp.” –Der Humorist

“Johann Strauss, he is Vienna’s musical genius; if he is silent, then Vienna is dead.” –Friedrich Uhl

His “Blue Danube Waltz” is among the most popular pieces in music history and is certainly not likely to start a riot on the dance floor today.

The parallels between this musical King and another, later, musical King are remarkable. Johann Strauss Jr. didn’t invent the waltz; he just made it the most popular dance music in the world. Elvis Presley didn’t really invent Rock ‘n Roll either, but it would be hard to argue that it wasn’t the most popular music in the world when he died in 1977. Strauss wasn’t the one who made the waltz culturally and morally acceptable (he inherited it that way), but he arguably single-handedly made it the voice of a whole country. Likewise, Elvis (in a remarkably short time) took Rock ‘n Roll from the ill-reputed nightclubs of Tennessee to a worldwide audience who accepted him and his music as the voice of America. And though Elvis’ performances may seem quaint and modest by today’s standards,

There is no question he caused a furor of gigantic proportions in the 1950’s and 60’s. Note the same kinds of warnings against Elvis and rock and roll as there were against the waltz in the 18th and 19th centuries.

“Presley is a definite danger to the security of the United States. … [His] actions and motions were such as to rouse the sexual passions of teenaged youth. … After the show, more than 1,000 teenagers tried to gang into Presley’s room at the auditorium. … Indications of the harm Presley did just in La Crosse were the two high school girls … whose abdomen and thigh had Presley’s autograph.”

“[Rock and roll is] brutal, ugly, degenerate, vicious. … It fosters almost totally negative and destructive reactions in young people. It smells phony and false. It is sung, played and written, for the most part, by cretinous goons. … This rancid-smelling aphrodisiac I deplore.”

“[Elvis Presley is] the man who brought overt blatant vulgar sexual frenzy to the popular arts in America.”

“His music and his personality, fusing the styles of white country and black rhythm and blues, permanently changed the face of American popular culture. His following was immense, and he was a symbol to people the world over of the vitality, rebelliousness, and good humor of his country.”

“Elvis Presley is the greatest cultural force in the twentieth century. He introduced the beat to everything and he changed everything.”

“Nothing really affected me until Elvis.”

And just as Goethe’s Werther described:

“When the waltz commenced, and the dancers whirled around each other in the giddy maze… Never did I dance more lightly. I felt myself more than mortal, holding this loveliest of creatures in my arms, flying, with her as rapidly as the wind, till I lost sight of every other object…”

So Bob Dylan said that hearing Elvis was:

Is this a defense of slump into moral decay? Hard to say. It definitely charts a progression from controversy into the mainstream for both the waltz and Elvis. Who can venture what controversial pop art of today will seem tame in 200 years?

Anthony Buck is a singer, director, actor, teacher, and writer.  Favorite directing credits include St. Matthew Passion, A Midsummer Night’s Dream, L’elisir d’amore, and Into the Woods. Onstage highlights: Moby-Dick, Man of La Mancha, Die Fledermaus, La rondine, Le nozze di Figaro.  He holds a DMA in Voice Performance and Opera Production from the University of Utah.  He lives in Salt Lake City with his wife and three adorable children. 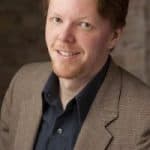