Of All the Unmitigated Gaul!

Gounod’s Roméo et Juliette is at the heart of a lively, age-old controversy. When it comes to Gallic opera, just where do you stand? No blood was shed, but make no mistake: This was war. It was the German partisans on one side, and the Italian loyalists on the other. The French were in between. The cause of this “war” was opera, and the composer Charles Gounod played a role that was quite literally central in the hostilities. He was a rising star when he composed Faust, but his early operas had not hinted at the degree of success that Faust and Roméo et Juliette would achieve. For the operagoer in Belle Epoque Paris or New York in the Gay 90s, Faust offered everything: an inexhaustible buffet of tunes and spectacle. Here was melodrama, a ballet, and a meditation on religious morality that came along with a near-orgy. When the Metropolitan Opera House opened its doors three decades after Faust’s premiere, opera was the most glittering performance venue in New York, with the Met’s ring of parterre boxes known as the “diamond horseshoe.” But attendance was not merely a matter of seeing and being seen; repertory was hotly contended along nationalistic lines — German versus Italian —with French operas, notably Faust, caught in the middle. 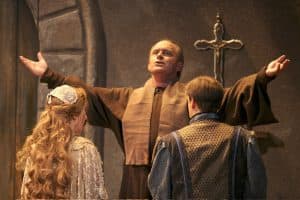 “The sauerkraut opera cannot last,” declared Col. J.H. Mapleson, an influential impresario, in a New York Times interview on April 21, 1885. “Italian opera is the only opera that can depend upon fashionable support.” A response the next day from “A Born American of German Descent” called the Italian works “ash barrel operas.” A Times editor mediated. “It cannot be said that either of these rival epithets is accurate or exhaustive,” he noted drily. “The word ‘sauerkraut’ does not convey a vivid sense of the dignity and grandeur of Wagner’s music-dramas; neither does the word ‘ash barrel’ convey in its fullness the tunefulness, the vocal art, and the sensual charm that belong to the works of Verdi and Donizetti. Perhaps it would be better to refer to the rival schools of dramatic music simply as ‘German’ and ‘Italian’ opera respectively.”

Perhaps, but not much. A contemporary cartoon depicts ferocious opera patrons squaring off on two sides: the Germanic, with their Wagnerian horned helmets and breastplates, ready to do battle with the Italian partisans wielding the spears and royal trappings of a Verdian historical drama. Devotees of French opera cowered on the sidelines under the protection of their exquisite sensibilities. During this period Faust was presented far more frequently than any other opera in New York, and the Metropolitan Opera became known as the ‘Faustspielhaus’ — a pun on the ‘Festspielhaus’ where German opera festivals are traditionally performed.

Such bickering had been commonplace in Europe for generations. In Germany and Austria, simply saying “Brahms oder Wagner?” could turn a quiet cafe into a raucous debate club. In France there were similar controversies over the relative merits of tradition versus innovation. With the huge success of Faust, Gounod found himself at the center of an argument that pitted German partisans against French loyalists; he composed Romèo et Juliette both to leverage Faust’s popularity and to preclude the kind of controversy Faust had provoked. He had based Faust on the deeply philosophical novel by Goethe, known even then as “the German Shakespeare.” The choice was bold, and while one couldn’t readily argue with the beauty or the theatricality of the result — which includes characteristically memorable tunes, spectacular stage effects, seduction, gore, and an ascent to heaven — the opera proved insufficiently German for the Germans. According to the prevailing joke, its title should have been “Marguerite,” the character whom Faust seduces, impregnates and then abandons. It’s no coincidence that Gounod moved from the German Shakespeare to the English one, and from one deeply philosophical romance to another; though he was a composer to his bones, he was irresistibly attracted to other arts, notably literature and drama. For him the challenge of adapting Romeo and Juliet was more literary than geocultural. 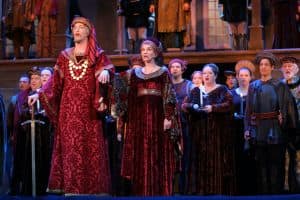 Opera audiences are, thankfully, no longer so factionalized, and “sauerkraut opera” has established itself as great and enduring music drama that even fans of Italian opera can love (and vice-versa). But despite its growing place in the standard repertory, and the international popularity of such composers as Gounod, Bizet and Massenet, some aficionados of French opera are wary; they think it takes a special, French-tuned ear to appreciate the Gallic elegance, concision and nuance at the heart operas by Massenet and Gounod. Roméo et Juliette may well be the opera that proves them wrong. After more than a century as Gounod’s second-most esteemed opera, Roméo has been gaining on Faust in the past decade. Increasingly, critics are daring to call it Gounod’s finest drama. And by framing Shakespeare’s universality in the elusive expressiveness of French Romantic style, he has opened its subtleties to all of us.

Cultural writer Michael Clive is program annotator for the Utah Symphony, the Louisiana Philharmonic Orchestra and the Pacific Symphony, and is editor-in-chief of The Santa Fe Opera.