United in Love…and in Death

Shakespeare’s star-crossed teenage lovers have inspired about twenty operas at last count. Most critics agree that Gounod’s Roméo et Juliette is the best of the bunch.

Charles Gounod was a master of graceful melody, French elegance and superb musical craft. But in the lush sensuality of Roméo et Juliette we hear something more: the sound of youth and of overwhelming love. Gounod’s music makes the heart leap and the rest of the world seem to disappear as he immerses us in one of the greatest of all romances. As the opera opens, Juliette ‘s youthful femininity sparkles, while Roméo is all masculine impetuosity. But their shared love matures them both, and their intense duets convey a deepening commitment that transcends their ages and their families’ ugly feuding. 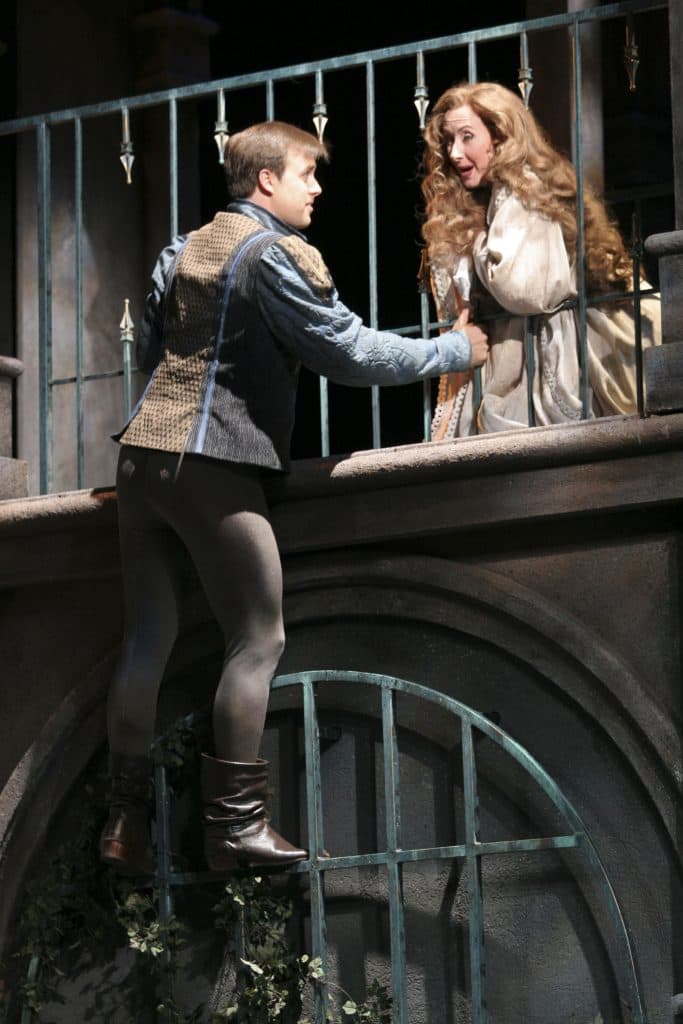 As we first encounter Gounod’s Juliette, her girlish vivacity shines forth in a cherished coloratura aria we have come to know as “The Waltz Song.” “Je veux vivre dans le rêve,” she sings — “I want to live the dream.” But even as we’re captivated by her innocence, we know what she has yet to learn: her life, though barely begun, is already nearly over. Her dream is ineffably tragic. Prophetically, she almost casually observes that “Cette ivresse de jeunesse / Ne dure, hélas! qu’un jour!” “This youthful intoxication lasts only a day!” Alas, she’s right. As the aria ends she begs the sweetly joyous flame of youth to endure, but soon it will end in another kind of fire: a romance that will burn all too brightly, consuming her and her young husband in its flames.

So sad…so poetic…so French! Roméo et Juliette, Charles Gounod’s second most popular opera (after Faust), would seem to be an ideal subject for a French master of melody and operatic craft: it has romantic ardor, poetic melancholy, the burnished patina of its antique setting, and the physical beauty of its youthful lovers. Most of all, it has Shakespeare — a dramatist who, despite his Englishness, fascinated French composers including one of Gounod’s early champions, Hector Berlioz.

Truly a child of the 19th century, Charles Gounod was born in 1818, five years after Verdi and Wagner. The arts were everywhere in his household. When Charles was only five, the loss of his father, an artist, brought him even closer to his adored mother, a pianist; his only sibling, a brother, was 11 years his senior. It was his mother who nurtured his musical talent, not only providing his earliest musical instruction, but also bringing him to a performance of Mozart’s Don Giovanni when he was 13 — an experience that overwhelmed him with its beauty and theatrical impact. His mature recollections of this first exposure to Mozart’s opera are that rare combination of a child’s point of view and an adult’s understanding. Reading them, we know that this boy — whatever else he might do — was destined to grow up and write operas.

After studies at the Paris Conservatoire, Gounod won the Prix de Rome in 1839 (as his father had for painting in 1783), permitting composition studies and travel in Italy. Instrumental and orchestral music including two symphonies followed. When he finally composed his first opera at the urging of the legendary soprano Pauline Viardot, he was 32. Its failure did not help the cause of his theatrical ambitions. But Gounod persevered, aided by the breadth of his cultural background and an exquisite sensitivity to the written word (as evidenced not only in his 12 operas, but in his superb songs). The sensation over Faust, which came eight years later, marked his first great success. 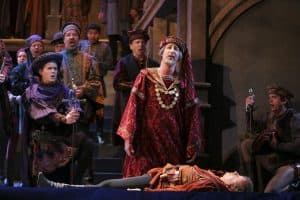 Clearly unafraid of literary masterpieces, Gounod tackled Roméo et Juliette in 1864, choosing the same librettists — Jules Barbier and Michel Carré — as he had for Faust. But musically and dramatically, the team’s approach for this project was quite different. While the highly episodic Faust treats us to a buffet of famous melodies, Roméo et Juliette has a more streamlined and elegant structure. Instead of delineating the bitter aristocratic feuding and street violence of Shakespeare’s drama, the opera compresses these elements while focusing on the ardor that Roméo and Juliette share, contrasting darkness with light.

The plotline of the libretto, unlike many adaptations of the play, follows Shakespeare’s closely. These are the Bard’s characters to the life, reborn in music. Romeo and Juliet share an incandescent love, but they inhabit a world of darkness. Street violence and bitter political feuding dominate daily life. Before he falls for Juliet, Roméo is a love-’em-and-leave-’em kind of guy, full of callow bluster. We hear all of this in Gounod’s rich score: There is ardor in sweepingly romantic arias and duets, and darkness in the burnished gleam and antique textures of the orchestra. Listen as Gounod’s music evokes the rising sun that must end the young lover’s night of ardent devotion; the sweet sadness of a calling bird; the magical, hypnotic drone of the orchestra as Juliette succumbs to the Friar’s sleeping potion. Though some incidents and characters are pared away and the ending is altered, the essence is preserved. And the Barbier-Carré resolution, in which the dying Juliet awakens in time to bid Romeo farewell, was probably based on a contemporary version of Shakespeare’s text by the English actor and playwright David Garrick. This ending was also chosen by Berlioz for his large-scale choral symphony of the drama.

In keeping with the opera’s economy of means, its most famous aria — Juliette’s “Waltz Song” — is the coloratura showcase that Gounod’s audiences wanted, but also brilliant character development. Fresh, bright and sadly ironic all at once, it tells us all we need to know about Juliette. But Romèo et Juliette is built upon its duets. Gounod was well aware that even Faust‘s detractors praised the glories of its great love duet, and its merits may have pointed him toward Shakespeare’s play, with its many duet opportunities. The love theme that Roméo and Juliette share frames the opera, and in their four duets we hear their love and their character mature from the bloom of youthful passion to solemn commitment to something even deeper: a love that is holy, eternal and magnificent…a love for the ages.

Cultural writer Michael Clive is program annotator for the Utah Symphony, the Louisiana Philharmonic Orchestra and the Pacific Symphony, and is editor-in-chief of The Santa Fe Opera.