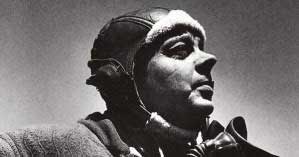 Adventurer, pilot, poet, and writer, Antoine de Saint-Exupéry (1900-1944) was born into an aristocratic Catholic family in Strasbourg, France. The untimely death of his father, when young Antoine was only four years old, plunged the family into impoverished nobility. Saint-Exupéry had two sisters and one golden-haired brother François. Brother François’ death at age 15, with Antoine at his bedside, provided one inspiration for the “death” of the Little Prince.

After twice failing the entrance examination for the Naval Academy, Saint-Exupéry began studies in architecture at the Ecole des Beaux-Arts. Though he did not graduate, his experience in drawing and drafting proved an important influence in his later work as an illustrator. Antoine enlisted in the French Army in 1921 and was stationed near Strasbourg where he started flight instruction. He was offered a transfer to the French Air Force and earned his pilot’s wings after being assigned to a fighter squadron based in Casablanca. Saint-Exupéry left the air force for an office position at the urging of his fiancée, Louise de Vilmorin’s family after experiencing his first plane crash. By 1926, no longer engaged, Saint-Exupéry was back in the cockpit, embarking on a pioneering career as a postal aviator in North Africa and South America.

Saint-Exupéry’s writing career began to “take off” after the publication of his novella L’Aviateur (The Aviator) and his novel Courrier Sud (Southern Mail) published in 1929. His fame and influence was fully established with the 1931 release of Vol de nuit (Night Flight), a semi-autobiographical novel based on his experiences as a mail pilot based in Buenos Aires, Argentina. That same year he married Consuelo Suncin, who proved to be both his torment and his muse.  She wrote a memoir after Antoine’s death in which she asserts that she was the inspiration for the character of the Rose in Le petit prince. 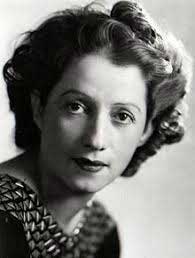 In December of 1935, Saint-Exupéry along with his navigator André Prévot crashed their plane in the Libyan desert some nineteen hours into a Paris-Saigon race. Poorly provisioned for a desert landing, the two men experienced severe dehydration and hallucinations. After four days, the men were rescued by a Bedouin who reversed their dehydration using traditional methods. This “brush with death” figured prominently in Saint-Exupéry’s memoir Wind, Sand and Stars, winner of several literary awards. Of course, the story of the Pilot in Le petit prince draws strongly from this experience in the Sahara. 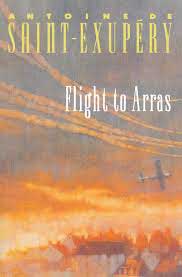 Saint-Exupéry traveled to New York from Lisbon in 1940. Intending to visit for only 4 weeks, he ended up staying in America for over 2 years. He was welcomed with open arms, collecting his 1939 National Book Award for Wind, Sand and Stars over a year late. The wives of his publishers, Reynal and Hitchcock, set him up in an apartment on Central Park South, where he wrote more than half of his output. At first, he had no clear plan, but his publishers were able to encourage him to write a volume on the fall of France, to be titled Flight to Arras. Published in February of 1942, the book served to manipulate the American view of French fortunes and became a number-one bestseller by May.

His time in America was tumultuous–he was isolated from Americans by his inability to speak English, yet the French expatriate community was divided into factions and he was unable to find his footing in the exiled society. His relationship with his beautiful Salvadoran wife Consuelo was exceedingly fraught with infidelity and turmoil. Owing to his surviving a number of plane crashes over his career in aviation, Saint-Exupéry was in very poor health, suffering from fevers, pain, and mobility issues.

Elizabeth Reynal, one of the wives who set him up in Manhattan, came to his rescue by suggesting Antoine write a story about the little man whom he incessantly doodled on napkins, tablecloths, scraps of paper, and throughout the margins of the manuscript of Flight to Arras. He purchased a set of children’s watercolor paints and began to work on Le petit prince, often writing at the Park Avenue home of his friend Sylvia Reinhardt, said to have inspired the character of the Fox. Hitchcock and Reynal pushed for the publication of the children’s story in part to compete with the popularity of P.L. Travers’ Mary Poppins novels, the third installment of which was released the same year. The novella was released in both French and English translation to generally positive reviews. The main “complaint” expressed by critics was that Le petit prince was too complex or esoteric to be a children’s book but was instead an adult fairy tale. The novella was not released in Saint-Exupéry’s homeland until after the liberation of France. 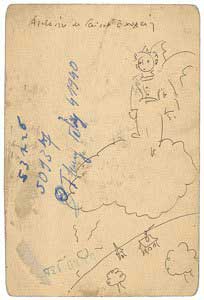 In 1943, Saint-Exupéry left America for Algiers to join the French Free Air Force and fight with the Allies in the Mediterranean. Though 8 years past the cut-off age, he was able to petition for an exemption, and learned to fly the reconnaissance model of the P-38, far more sophisticated than the planes he had previously flown. Though he was only approved to fly five reconnaissance missions, in July 1944 he left for his ninth such endeavor. He vanished without a trace, but a plane was reported to have crashed off the coast of Marseille, followed by the discovery of an unidentified body several days later. In 1998 a fisherman found a silver ID bracelet bearing the names of Saint-Exupéry, his wife Consuelo, and his American publishers. Two years later, the remains of a P-38 Lightning were discovered strewn on the seafloor by a diver, and in 2004 the wreckage was confirmed to be that of Saint-Exupéry’s plane. Since his passing, Antoine de Saint-Exupéry has become a French icon, memorialized on the 50-franc banknote, with the airport and train stations in Lyons bearing his name. These afore-mentioned tributes are just a few of dozens that have been established internationally in honor of this aviator and writer, a true hero of France. 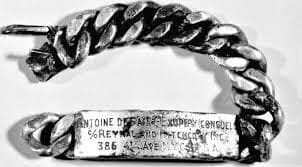 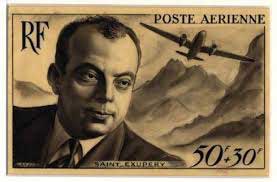 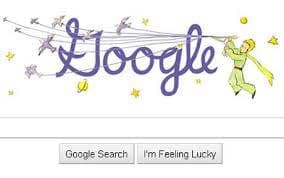