Characterization through Music: Tamino and the Queen of the Night

There are more socio-economic strata in The Magic Flute than in almost any other opera by Mozart, though the nearest rival may be (significantly) The Abduction from Seraglio. In other well-known Mozart operas like The Marriage of Figaro or Don Giovanni, for example, there are still high-born and low-born characters, but their social positions are polarized. In The Magic Flute, on the other hand, four or five different social classes are represented, each of them illustrated by the music Mozart writes for the characters.
Suiting the music to the character (as well as to the specific singer) was a particular gift of Mozart’s, and he had done this kind of thing in opera many times before. You can tell as much about a character in a Mozart opera by the style of music they’re given as you can by their words and actions. A concise and clear example of this comes at the beginning of The Marriage of Figaro where Susanna emerges as a strong, smart, willful character. Within the first two minutes of the opera, not only does she convince Figaro to stop his work and pay attention to her, but she manages to convince him to “sing her tune” both figuratively and literally. Figaro’s subservience to Susanna is represented not only by his actions, but also by his shift from short, business-like musical motifs to Susanna’s sinuously flowing melody.

In Mozart’s operas, you can trust the music to tell you what you need to know about a character, and this quality overrides many of the superficial dramatic ambiguities about how the characters act throughout The Magic Flute. The music Mozart writes doesn’t deceive or confuse the way a character’s dialog or actions can.
In this opera there is an extraordinary range of musical styles from popular ditties (Papageno) to elevated late 18th-century operatic style (Tamino, Pamina), to a parody of baroque opera seria (the Queen of the Night) to Lutheran chorales (the Two Armed Men) and simple hymn-like choruses. It is a compendium of Mozart’s operatic writing techniques. And while the musical relationships and styles in The Magic Flute are complex, they are not complicated. In the opening scenes, Mozart shows the audience through the music the true characters of the participants in the drama. (The illustrations here are from Utah Opera’s 2006 production of The Magic Flute, with Thaddeus Strassberger’s sets and Susan Memmott Allred’s costumes).
First, Tamino—a prince from a foreign country (Japan) deposited magically into a strange land where he seeks to know the ways and culture of the people. He is honorable and honest. 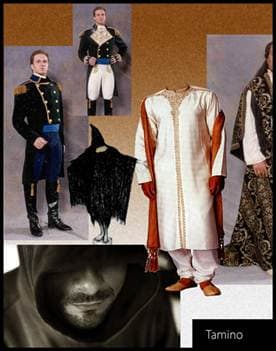 These qualities are demonstrated in his first aria, the heartfelt “Dies Bildnis ist bezaubernd schön,” which demonstrates true emotion and sensitive feeling. The musical representation matches perfectly with the dramatic moment, so we know we can trust his character to do the right thing as he sees it. He is the ideal.

By contrast, the Queen of the Night’s first aria is musically at odds with the impression she tries to give. 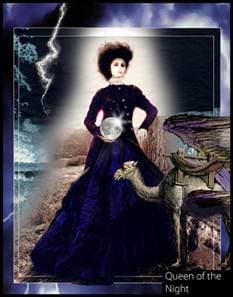 At her introduction, the audience is aware merely that she is a Queen who is supernaturally powerful, and that Sarastro has taken her daughter. She solicits Tamino’s help to get her daughter back, and promises her daughter to Tamino if he succeeds. There is nothing inherently evil or sinister about the plot details at this point. Similarly, she gives Tamino and Papageno the magic flute and the magic glockenspiel (traditionally these kinds of magic objects are neutral, as in Wagner’s Ring of the Nibelungen, not belonging to the forces of good or evil necessarily), which are good and useful tools. 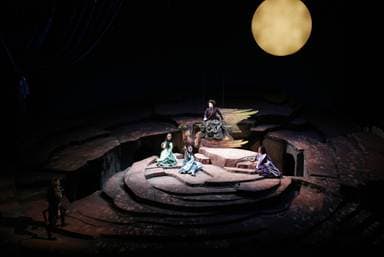 But her aria is in the style of late Italian baroque opera seria, an outdated and frankly obsolete style by 1791. Characters in baroque opera were not real—they were stylized and artificial. What’s more, the Queen of the Night is the only character in The Magic Flute who sings in baroque-style recitative. Mozart makes clear through his musical setting that the Queen is not honest and “real” the way Tamino is. Her story, as she relates it to Tamino, is overly melodramatic, the emotions are “performed” instead of being sincere, and one can detect already in the music a deception, an artifice.

The orchestral introduction to her recitative begins with a syncopated accompaniment figure (0:00 – 0:20) that recalls Mozart’s and Haydn’s “Sturm und Drang” (or “Storm and Stress”) symphonies where the relentless syncopations indicate unrest. The Queen of the Night tries to give the impression of being firm and steadfast, but the music tells us otherwise—she is not grounded, nor is she in control.
The very rapid shifting between emotions also suggests that she is fickle. Mozart employs standard (even clichéd) musical gestures to illustrate this inconstancy and point up how shallow her façade really is:
• Stern and upright rhythms at the words “You’re a brave young man”
• Chromaticism for “Only you could console my sorrow”
• Plaintive and sorrowing when she sings “My child has been taken from me…”
• But suddenly turning to bold dotted rhythms for “…by an evil man.” (This is an especially telling musical symbol here. Mozart uses the majestic dotted rhythm of a French Overture, indicating royalty, but it’s also the same dotted rhythm that introduced the Queen herself, suggesting to the audience that if the “evil man” is royal, then she herself, who is also royal, is equally suspect)
• Cries of “help, help!” soaring up into the high register
• But immediately optimistic and jolly when she sings “You shall save her.”
Then the impossibly long melisma she sings on “So sei sie dann…” (4:05 – 4:37) marks the Queen of the Night as somewhat ludicrous as well. The word “dann” (“then”) is not an important word in the dramatic thrust of the aria, and doesn’t really deserve such emphasis. (A more logical place for emphasis would be on the word “forever,” in the phrase, “She will be yours, then, forever.”) Where Mozart places that long embellishment tells us that the Queen hasn’t really thought this through—the mask is slipping.
The Queen is a remnant of an earlier, unenlightened age, and Tamino suspects this already. Immediately after the Three Ladies and the Queen have appeared to Tamino, he begins to suspect that what he just saw wasn’t, in fact, real, that it was simply a fantastic display. 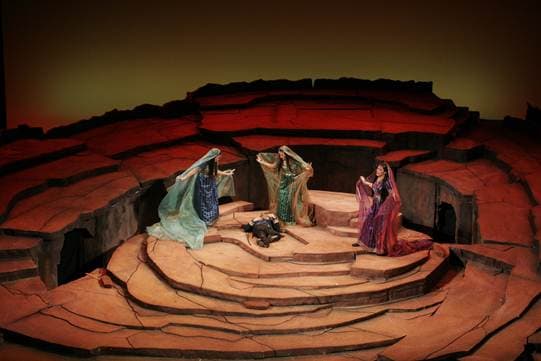 He says, “Is this actually reality that I saw? Or are my senses deceiving me? Oh, ye good Gods! Don’t let me down or I’ll fail to pass your test.” He doesn’t trust the Queen, and doesn’t trust his senses, but he does trust his own character and moral judgment.
Later in Act I, Tamino references his suspected mistrust of the Queen explicitly and musically by singing “O ew’ge Nacht” (“O, endless night”) to a minor-key version of the Queen’s “O zittre nicht” motif. Night is now a curse, and Tamino seeks for the light that the Queen cannot provide. (0:48 – 1:09)

The facile façade and “performed” lamenting of the Queen of the Night’s first aria is then further emphasized in Act II when her daughter, Pamina, expresses true loss in the aria “Ach, ich fühl’s.” Both arias are in the same key, and express the same sentiment, but Pamina’s aria is much more earnest and honest. (starting at 0:44)

She becomes so impassioned that at the end of the aria the musical structure devolves back into recitative. In doing so, Mozart shows us that she is out of control—she has not mastered her emotions in the way that the ideal characters in the opera, Tamino and Pamina, are taught to. There is a precedent in Mozartian opera for this devolution back to recitative at the end of an aria, in The Marriage of Figaro when Cherubino sings “Non, so più.”

Just as Cherubino doesn’t have the maturity or the emotional control to sustain his aria form all the way through to the end, The Queen of the Night is similarly undone by her unchecked emotions.