The world of Italian opera was changing rapidly in the mid-19th century, and Verdi’s career path followed suit. Opera in the first half of the 19th century was a widespread form of popular entertainment even in the most provincial villages, and the performances were often rowdy and more than a bit rough around the edges. New operas were in constant demand, and surveys over the period from 1838 to 1857 estimated an average of 43 new operas per year (Van, 6). Of course, the downside of this demand was that individual operas were quickly discarded and forgotten to make room for new productions. Opera composers who liked food and shelter had to work continuously and quickly, and the high rate of turnover and lack of legal copyright protections made life particularly stressful and financially insecure. Additionally, a composer would expect that the finished score would be cut, augmented, or otherwise altered according to the whims of the impresario and the star singers. It was not for nothing that Verdi referred to his early years under this business model as being akin to life as a “galley slave.” The latter half of the century, however, saw both the increased professionalization of opera and an increasing reliance on a standard repertoire of works. Indeed, opera scholar Gilles de Van considers the success of Verdi’s 1850s “trilogy” (Rigoletto, Trovatore, Traviata) to be largely responsible for sparking the creation of an operatic repertoire in the first place. (Van, 5) Finally, a series of increased copyright protections from the 1840s to the 1880s allowed Verdi and other composers to live off the proceeds of earlier successes while working on new operas. Verdi took further advantage of these developments as a means to exercise more control over his productions and consolidate his power as a composer.

The premieres of La traviata demonstrate the artistic compromises that were still necessary in the mid-1850s, however. La traviata’s 1853 premiere in Venice managed to avoid the censors in most regards, not the least because the censorship boards there were a little less strict and Verdi had essentially stared them down a few years prior in the battles over Rigoletto. The main stipulation for traviata was that the action be removed from the present day and placed in the early 1700s. Verdi objected, but ultimately gave in after a visit from the management. The fact that Verdi was composing and premiering Il Trovatore more or less at the same time and was in fact late to deliver La traviata and arrive in Venice possibly made him feel that the fight wasn’t worth waging.

Casting Violetta for the premiere created the most strife between Verdi and the theater’s management because Verdi had an exacting vision for the role. The role of Violetta is particularly demanding, and not simply because of the technical faculties required to perform it. The soprano must also possess a formidable acting range to embody the changes in the character over the course of the opera. The Violetta of the first act is a virtuosic coloratura soprano, displaying her luxuriousness in brilliant vocal acrobatics. The second act finds her first respectable and poised, and later noble and tragic. By the third act, she is increasingly frail, to the point that she sometimes seems to resort to speech out of weakness. Verdi provides many of these characterizations in his music, but the soprano must also be an accomplished actress in order to truly make them feel authentic. Verdi considered the soprano for the premiere, Fanny Salvini-Donatelli, to be entirely unsuitable for the role due to her age and physique, but missed his chance to dismiss her because he was preoccupied with Il Trovatore. His dissatisfaction also extended to the entire company, and his last letter to the management predicts a fiasco. (Budden 122-23)

Many of these factors combined to give La traviata a premiere that has been widely reported as disastrous, although some of the details have likely been embellished. Indeed, Salvini-Donatelli’s numbers were well-received by the audience and the press, although the male leads seem to have basically bombed. The audiences were reportedly enthusiastic through the first act, in which Salvini-Donatelli’s vocal skills would have been showcased, but their ardor waned over the second and third acts.

Following the 1853 run, Verdi rejected offers for performances in other cities and for revivals in Venice with different casts; he did not want to subject traviata to the whims of religious censors nor was he inclined to remount it without a cast that met his standards. Finally on May 6 1854 La traviata was revived at the Teatro San Benedetto in Venice with Violetta played by Maria Spezia, a much younger and more gracile soprano, and was a resounding success. Verdi seems to have credited her with most of the opera’s success, and wrote to friends that he had made few alterations save for some transpositions to suit the current cast. While this claim perhaps allowed Verdi to say “I told you so” to the Teatro La Fenice, his revisions were certainly more substantial than he claimed. Budden’s examinations of the few extant sketches from the first act led him to the conclusion that Verdi’s revisions were aimed largely towards making the music simpler and more direct in its expression, attributes that have helped to carry the opera over the years. (Budden 125-28)

Later productions in other cities both in Italy and abroad did bowdlerize the libretto somewhat on account of its subject matter. Existing libretti from performances in Bologna, Naples, and the Papal States show that they were cut ruthlessly, which Verdi expected. Budden notes that the line “croce e delizia” (literally, “cross and delight”) had to become “pena e delizia” (pain and delight) in Bologna. English critics in 1856 likewise spoke of the opera’s “foul and hideous horrors,” even as it became a popular favorite. (Budden 164-65) Verdi also never seems to have revisited the issue of the opera’s historical setting in 1700s Paris as opposed to the contemporary setting he originally envisioned.  The intimacy of the opera’s action perhaps makes the historical setting less relevant in any case. 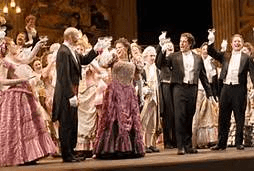 La traviata, along with Il Trovatore and Rigoletto, were primed for lasting success in ways beyond their musical gifts. Outside the opera houses, Verdi’s catchy melodies found their way into nearly every nook and cranny of European society via barrel organs, accordions, and piano arrangements. Roselli notes that steamships and railways allowed Verdi’s operas to quickly follow routes of European expansion and colonization, either with touring companies or simply in sheet music format. (Roselli, 86-87) For example, it took only about 25 years for productions to be mounted in the American West.  Opera in Old Colorado notes that the Forrester Opera House in Denver produced Il Trovatore in 1877 and La traviata the following year. We can also comfortably assume that individual arias and scenes were performed by both professionals and amateurs well before these full productions. Of course, it also almost goes without saying that these three operas have never waned in popularity. Even today, if my singer friends from graduate school are to be believed, it possible to go for a drink in an Italian tavern and end up leading the regulars in an accurate, if slightly raucous and appropriately boozy, rendition of “Libiamo ne’ lieti calici.”