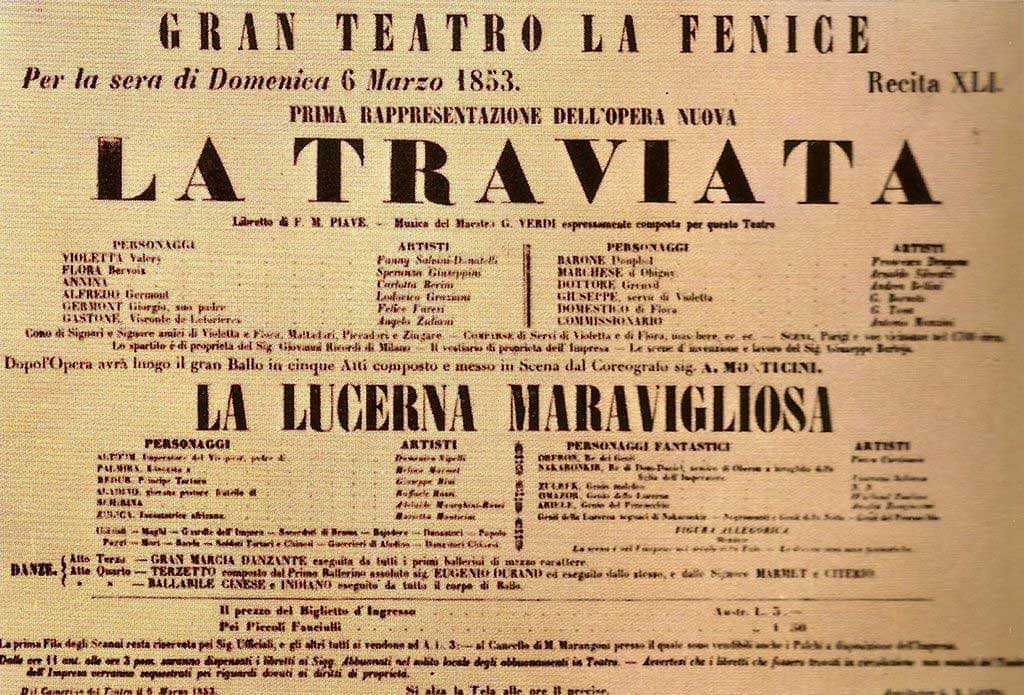 In the world of opera in the 21st century, La Traviata remains one of the central pillars of the repertoire. The archival website Operabase.com records La Traviata as the most performed opera of the 2018/19 season, and it is always be near the top of any such list along with other evergreens by Mozart, Puccini, Bizet, and Verdi. The opera was not obviously destined for such prominence, though. Its initial premiere in 1853 was not successful, although it was rehabilitated in a revised version a year later. Verdi predicted that it would be controversial, writing to a friend that he had discovered a “subject for our own age” that other composers wouldn’t touch with the proverbial ten-foot pole. But his success with the controversial Rigoletto in 1851 had perhaps given him confidence in his own instincts on such matters. Verdi was also working again with Francesco Maria Piave, the librettist for Rigoletto and several other operas, and who Verdi often treated essentially as an employee rather than a collaborator.

The action of La Traviata centers around three characters, the “traviata” (“fallen woman”) Violetta Valéry (soprano), a glamorous courtesan who is hiding the fact that she is sick with tuberculosis, Alfredo Germont (tenor), a young man who becomes Violetta’s lover, and Giorgio Germont (baritone), Alfredo’s father. Over the course of the first act, Violetta (initially the lover of one Baron Douphol) and Alfredo meet and fall in love. The second act finds them in domestic bliss in the country until Giorgio Germont convinces Violetta to leave Alfredo for the good of his family, particularly a sister whose engagement is imperiled by Violetta’s reputation. Violetta agrees to sacrifice herself and plans to return to her former life, even though she still loves Alfredo. 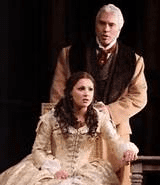 At a party, Violetta lies to Alfredo, telling him she now loves the Baron, and he responds angrily, publicly humiliating her by paying her for her “services” in front of the guests. The guests and Germont rebuke Alfredo for this behavior. The final act finds Violetta at death’s door, but Germont has written her that he has informed Alfredo of her sacrifice. Alfredo arrives and the lovers are reunited, although Violetta knows that her time is at an end and she dies in Alfredo’s arms. 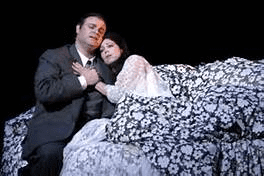 The source material for La Traviata is the Alexandre Dumas fils’ 1848 novel La Dame aux camélias, a fictionalized and embellished account of the author’s tumultuous love affair with the famous Parisian courtesan Marie Duplessis (1824 – 1847) which he published following her death at age 23 from tuberculosis. In addition to his real-life experience, Dumas drew inspiration from Abbé Prévost’s 1731 novel Manon Lescaut, the story of a wealthy gentleman who forfeits his inheritance in order to run away with his lover but ultimately finds himself unable to satisfy her taste for luxury. In Dumas’ La Dame aux camélias, the real-life courtesan Marie Duplessis becomes Marguerite Gauthier and Dumas is reinvented as Armand. Dumas further added their idyllic retreat to a house in the country and the crucial intervention of Armand’s father. Dumas adapted La Dame for the stage in 1852, and it was this stage version that Verdi saw in Paris in 1852 (although he was likely already familiar with the novel).  In this source,

Verdi saw a timely and contemporary drama that he could mine for inspiration. To a certain extent, Verdi was hopping onto a few cultural trends of the moment, as demimondes like Duplessis achieved a certain amount of celebrity in the mid-19th century due to their mix of the glamorous and salacious.  A particularly nasty strain of tuberculosis had also been circulating over the past few decades, so consumption was likewise “in the air.”

The characters and situations of La Dame evolved as they moved from the printed page to the stage. In particular, the novel’s coarser details of the courtesan Marguerite Gauthier and her circle are cleaned up and sentimentalized in the stage version of La 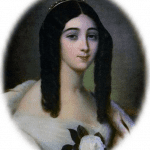 Dame aux camélias.  For example, the initial party scene in Dumas’ original novel is a small gathering punctuated by increasingly lewd jokes. One of Armand’s friends also apparently does “business” with one of Marguerite’s retinue. The opera version, La Traviata, further glosses over many of the particulars of the courtesan’s profession, almost to the point that Violetta could be introduced simply as the Baron Douphol’s party-loving girlfriend. Even the titular camellias lose some of their meaning in the journey from the novel p

age to the opera stage. Originally, the flower’s color (white or red) indicated the courtesan’s availability, referring to rather indelicate physical realities of life. When Armand is given a red camellia and told to come back when it is wilted in La Dame, it is not the flirtatious gesture of La Traviata, but is instead a “rain cheque.” Indeed, with this in mind even the simple change of title from La Dame aux camélias to La Traviata shifts the focus from the title character’s profession to her inner virtue. In addition to making the subject matter palatable for the mid-19th century opera stage, critic Julian Budden argues that the sentimentalization of the entire situation (starting with Dumas himself and continuing with Verdi and his librettist) allows characters like Marguerite and Violetta to take on a mythic quality by relaxing the tension of their contradictions and hypocrisies. (Budden 120-21) To this end, Marguerite and Violetta serve as the archetype for a number of dramatic and cinematic narratives that hinge on a “hooker with a heart of gold” character.