The “Christmas Truce” of 1914 refers to a series of informal ceasefires that took place around Christmas along the Western Front in WWI. During these ceasefires, French, German, and British soldiers would sometimes venture into no-man’s-land between the trench lines to talk and exchange food and souvenirs, and there are reports of carol singing and football matches. However, the ceasefires were not ubiquitously friendly; in some cases the ceasefires were simply occasions to gather bodies and in some areas fighting continued unabated.

These truces have become weighted with symbolism as periods of peace and understanding amidst one of the most violent wars in history. World War I was notable for technological advances that greatly amplified the casualties of war as compared to earlier conflicts in the 19th century. The combined use of barbed wire, machine guns, and artillery effectively prevented troop movement across open ground, making established military tactics obsolete and contributing to heavy casualties. 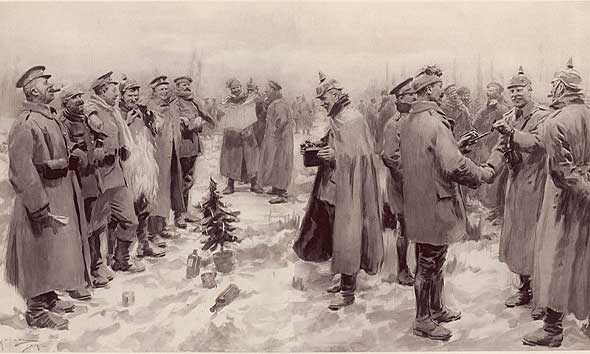 An artist’s impression from The Illustrated London News of 9 January 1915: “British and German Soldiers Arm-in-Arm Exchanging Headgear: A Christmas Truce between Opposing Trenches”

The war also saw the introduction of tanks, submarine warfare, advanced artillery guided by field telephones, the first use of airplanes for aerial bombardment, and the deployment of poison gas. By far the most enduring images of World War I, however, were the networks of trenches on the Western Front that languished in an effective stalemate for two years as both sides failed to gain lasting advantages. The casualties were extreme, with total casualty estimates ranging from 9 – 15 million, with civilian deaths numbering around 6.5 million. For example, the Battle of Verdun averaged 70,000 casualties a month for the period from February to December 1916 for a total of no less than 700,000 and possibly more than 900,000 for the year. By the time the war was over, Germany and Austria-Hungary had both lost more than 15% of their active male population, and the chaotic conditions of the war set the stage for disease epidemics and famines that claimed millions of victims, as well as pogroms and genocides in the Russian and Ottoman Empires. 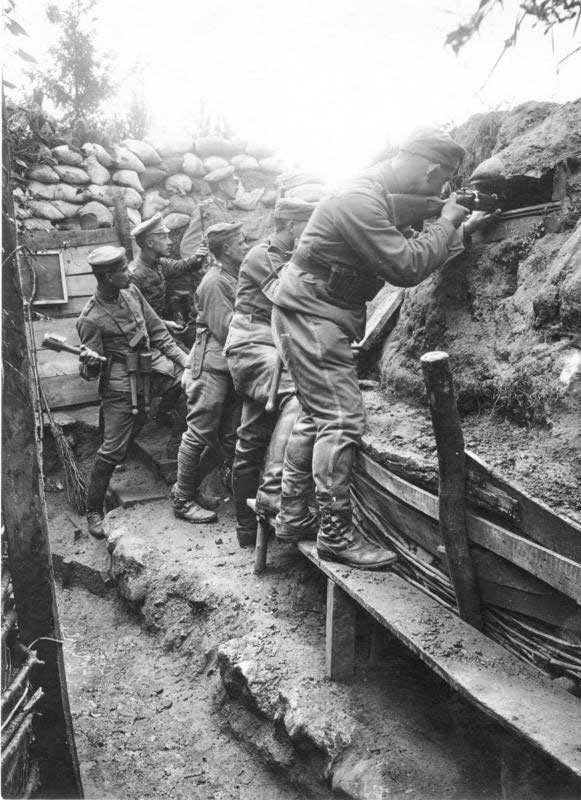 Soldiers in the trenches

Amidst these almost mind-boggling numbers, the truces of 1914 seem like a beacon of hope for humanity, but it is also worth noting that they took place comparatively early in the war before its full horrors were unleashed. The warring nations had come to a temporary stalemate and the fighting was in a bit of a lull, and the soldiers of opposing sides regularly adopted an attitude of “live and let live” in which fighting would temporarily cease in order to allow for deliveries of rations, recovery of bodies, or other activities. In some areas, the soldiers would extend this to conversations across the trenches, exchanges of newspapers and souvenirs, and occasionally visits to opposing trenches. Music was a regular activity, with some soldiers clearly aiming to either entertain or taunt their counterparts across no-man’s land.

Although this complex “live and let live” system was widespread in various forms throughout the trenches of World War I, along with other acts of non-co-operation like strikes and mutinies, nothing as dramatic as the Christmas Truces happened again. Commanding officers took measures to ensure discipline among their troops, including the use of artillery fire to disrupt attempts at communication and some instances of court-martial for disobedience. While British and American newspapers lauded the truces, German and French press coverage was less favorable, with the French government in particular underlining that fraternization with the enemy was an act of treason. Further, the mounting grind of the war and the eventual use of chemical weapons bred resentment rather than camaraderie between sides.

Of course, looking back on these scenarios from the 21st century risks becoming an exercise in saccharine sentimentality, giving us a sense of reassurance that our inner goodness can shine through even in the most extreme circumstances. But as noted above, this event took a very particular set of circumstances and a certain amount of cultural familiarity. For example, many soldiers on the German side had spent time in England and spoke English, so they had an easier time seeing the British as potential comrades rather than combatants. There was much less trust between the French and the Germans, and this enmity is evident in the opera. The fact that World War I wasn’t a religious war, or a war bred out of other ideological conflicts, also made temporary reconciliations easier for the soldiers on the front lines. And while the history of European wars is an excellent example of the notion that familiarity breeds contempt, the simple fact that the combatants looked like one another and shared many other cultural touchstones made these truces easier to come by.  It makes us feel good to imagine ourselves as inherently peaceful, but that probably does us a disservice by encouraging the fantasy that peace and understanding in other arenas might be achieved through Christmas caroling. It’s obviously much more difficult than that, as the subsequent 105 years of European history alone should make clear.

Thankfully, Puts’ Silent Night doesn’t turn away from this fact of history. Yet there is a certain modern nostalgia for the gallantry, honor, and battlefield decorum that supposedly defined combat before the age of “total warfare” in the 20th century. This idealization of past conflicts is in some ways understandable, as there is definitely a sort of frisson about meeting an opponent face-to-face on a battlefield as opposed to remotely piloting a drone from a suburban office park in order to kill people 8,000 miles away. The men in Silent Night might come to recognize the humanity of their opponents, but machine guns, tanks, bombers, and nuclear weapons will make no such distinctions. It’s a twisted sort of nostalgia, but we at least used to kill each other like humans.  But as the Christmas truces show, such realizations can be seen as dangerous and traitorous because they might get in the way of the mission at hand and even create vulnerabilities for the enemy to exploit, and the military brass will have none of it.