Note: Timestamps included in this article are in reference to this site in case you would like to hear those moments specifically:

The second act opens early the following morning, with a bleak horn solo that meanders chromatically for a minute or so before passing the melody off to the cello. The violins enter, slowly building a minor chord that they sustain underneath the cello’s melody. Eventually, the rest of the orchestra enters, but the texture remains fairly transparent even though the harmonies remain dissonant, utilizing wide intervals and large melodic leaps as opposed to claustrophobic tone clusters. The scene setting music ends with a solo cello. The musical language of this scene reminds me a lot of Ives’ The Unanswered Question, with its chromatic melodies wandering over sustained string harmonies.

The scene finds Jonathan walking out towards no-man’s land with a shovel to bury his brother. As he comes to the attention of a couple of German soldiers, who argue over whether or not to shoot him, the music shifts to an unsteady off-kilter rhythm in the low brass (3:00). Gordon and Palmer try to get Jonathan back to the trenches; then Horstmayer enters and they discuss whether or not to extend the truce in order to bury the dead. Audebert emerges from the French trenches and they all agree to extend the truce until three o’clock in order to retrieve and bury the dead. Puts underscores this conversation with sneaky-sounding pizzicatti, underlining the fact that these commanders don’t quite trust one another, and indeed the conversation threatens to get heated at moments. After agreeing to the truce, Horstmeyer gives Audebert his wallet, which he found in the German bunker, and Horstmeyer notes that Audebert lives in the same part of Paris where he and his wife spent their honeymoon.  Ponchel’s alarm clock goes off and Audebert shares that he keeps it set for 10am every morning to remind himself of having coffee with his mother in the mornings before the war. 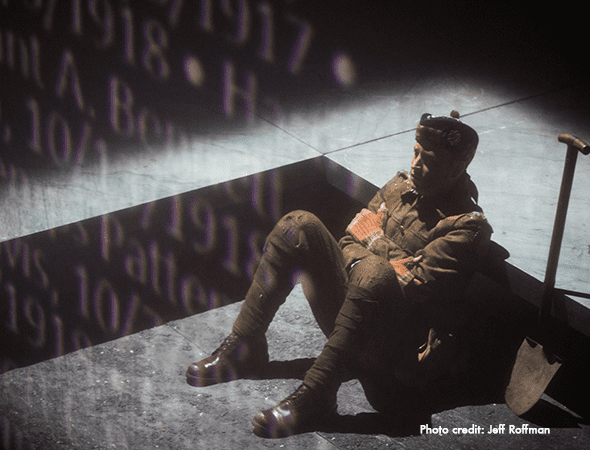 The second scene opens with a solo flute and a slow quarter-note figure from the harp, repeating a two-note pattern that feels like a quiet ticking underneath as the texture slowly fills out (11:30). On the one hand, it underlines the solemnity of the scene as the men gather the corpses, remove weapons, and fashion crosses for graves, but on the other it also possibly highlights the limited time of peace remaining. 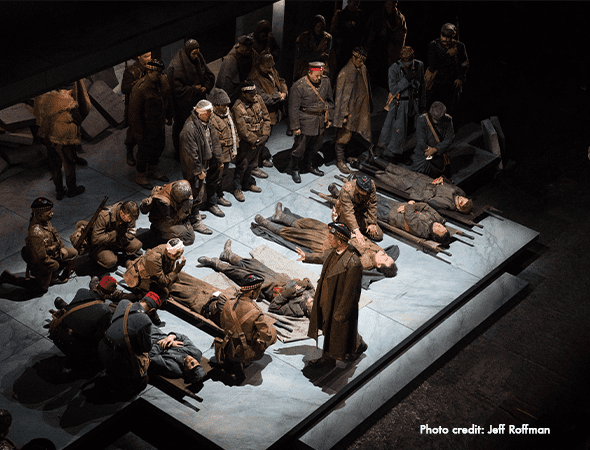 Puts builds the scene to a big major chord, which fades away as a lone bagpiper accompanies the funeral procession. (14:30) Anna and Nikolaus remain, and she expresses her certainty that someday she will be like the mothers and wives who will hear of the deaths of those men.  Then, accompanied by a slow timpani rhythm and a sustained harmony that builds in intensity, she declares that she will find a way to do something about it.

Her final phrase, “…ich werde einen Weg finden” (“I will find a way”) elides into the next scene, which comes crashing in with tense Stravinskian chords and rhythms that constantly throw the listener off-balance (20:00). This accompanies the sudden appearance of three platforms in no-man’s land, on which the Kronprinz, the French general, and a British major appear. They each hold communiques detailing the truce and all of them are clearly furious.  They all sing over another in another scene of polyglot polyphony, although each of them is essentially saying the same thing, that the soldiers are traitorous and that such fraternization is dangerous. Soldiers appear behind them, playing soccer and drinking after the funeral, and the commanders all determine that the units must be punished and news of their fraternization suppressed so it doesn’t occur again.

The celebration behind the generals reaches a peak as they depart, and then Gordon signals to Audebert and Horstmeyer that it is three o’clock (23:00). The men quiet down, shake hands and return to their bunkers while the three lieutenants remain in the center of no man’s land. Puts begins an insistent dotted rhythm on a sustained A that underscores the rest of the scene, lending it a sense of tension and urgency, as their time of truce is quickly drawing to a close. Gordon notes that he’s received a communique that his unit is being shipped off and that they are also receiving a visit from the major. The lieutenants wish each other good luck, and Puts closes off the scene with a pair of dissonant chords as the men return to their bunkers and the dotted rhythm slowly fades out.

The next scene finds us in the German bunker, as Horstmayer informs Anna that a car will arrive in a half-hour to take her away, accompanied by dissonant contrapuntal strings (25:00). Nikolaus asks Horstmayer whether he plans to still shoot down the enemy, and when Horstmayer replies that he will continue to serve the Fatherland, at which Nikolaus explodes at him, calling him a fool for thinking he’s serving the Fatherland when he’s really serving the rich and powerful and their “idiot of a Kaiser.” Horstmayer orders Nikolaus’ arrest, at which point Anna takes his hand quietly and over his protestations leads him out into no-man’s land, accompanied by a single-note from the harp and cello, quietly tapping out a steady quarter-note rhythm (27:20). Horstmayer orders his soldiers to seize them, but they don’t move, at which point Horstmayer grabs a sentry’s gun and orders them to stop or he will shoot them. Anna and Nikolaus continue walking, and after leveling and lowering the gun several times, Horstmayer finally fires a shot into the air (as a Gen-Xer, my reference point for this scene is the action movie Point Break, although it’s a very different scenario) and storms off. Anna and Nikolaus reach the French bunker and request to be arrested as prisoners of war so as not to be separated again. After making sure they recognize the seriousness of what they are doing, Audebert declares that they should be locked up, at which point the French soldiers cheer and Ponchel quips that “if it has to do with love, at least now [they’re] on the right side of the trenches.” 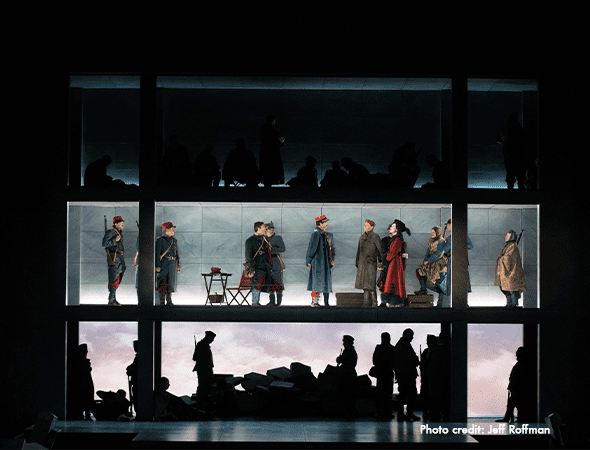 After a slight dimming in the lights, we find soldiers in all three bunkers writing letters home about the truce, beginning with a Scottish soldier declaring that “It was the most amazing thing. I shall never forget it.” (31:00) Puts accompanies this scene with a light descending figure played on a celeste, that is slowly filled out by the rest of the orchestra as the French and German soldiers enter with their lines. The French and German soldiers both end with an admonishment to their recipients not to tell anyone, emphasizing the heightened enmity between those nations as opposed to between the British and the Germans. Recall that while the British and American papers treated the truces as a heartwarming human interest story, the French and Germans had much less trust in one another and looked upon the truces as potentially treasonous. The scene then turns to Jonathan, who writes of William’s exploits on the battlefield because he doesn’t yet have the heart to tell her the truth, and Audebert, who wishes Madeline and their child sweet dreams.  The lights dim down as a faint and transparent sustaining chord closes the scene.

The next scene opens with sudden light of morning and a bracingly dissonant version of the “birdcall” motive that accompanied the French general in the first act, for in this final act the lieutenants and their men are going to have to face the consequences of their unsanctioned truce (33:45). The jarring music gives way to slowly oscillating chords in the piano and strings, occasionally punctuated by sixteenth-note figures in the drums and brass. In the British trenches, Gordon and his men are dressed down by the major and informed that they are being transferred to Neuve Chapelle, which will ultimately be the scene of a major battle in March 1915. The British major then spies a German soldier walking across no-man’s land, and the oscillating chordal accompaniment switches to tense tone clusters as the major orders the men to their posts and angrily demands that they shoot. The soldiers ignore him until finally a shot rings out and Jonathan stands with a smirk on his face, as an alarm clock rings from the fallen soldier, revealing that he has actually shot Ponchel. The Scottish soldiers leave, but Palmer remains as French soldiers with white flags rush out to carry Ponchel back to their trenches. In the French trenches, Ponchel reveals that he had borrowed the uniform in order to visit his mother behind enemy lines and have coffee with her, and as he dies he shares that she had learned that Audebert’s wife had had a son and named him Henri. Palmer attempts to say a prayer but is unable to finish, and he takes off his cross and throws it into no-man’s land.

When Audebert returns to his office, the French general is there, accompanied by the same birdcall motive from earlier (38:45). The general reminds Audebert that what he did is considered treason, and cautions him that word might get out about it from some of his less loyal soldiers and ultimately land him in prison.  The general then informs Audebert that he has arranged for his transfer to Verdun, a village away from the front lines where, in the general’s words, he can’t do any more harm and a place the Germans probably don’t know exists.  Then, for the first time, Audebert addresses the general as Father (which explains his earlier attempt to transfer Audebert away from the front) and informs him that he now has a grandson, at which point the general states that they should both try to live through the war for his sake. Of course, the irony of this is that Verdun, Audebert’s destination, became the site of the longest battle of World War I, lasting from mid-February until mid-December in 1916 and claiming anywhere from 714,000 to nearly a million casualties.

Finally, the scene turns to the Germans, who are in a train boxcar with the Kronprinz enroute to a new assignment on the Eastern Front against the Russian army, in the hopes that they might “regain their fighting spirit and crush those enemies of the empire.” (41:45) The Kronprinz exits with a final shot at Horstmayer’s Germanness. As the boxcar begins to roll off the stage, one of the soldiers begins playing “My Home’s Never Far Away,” the sentimental song that sparked the truce. Several other soldiers hum along until the boxcar rolls off the stage, leaving it empty as snow slowly begins to fall. Offstage, a French soldier recalls Anna’s singing, and a German soldier tells of the men gathered around the cross, calling back to the letter-writing scene earlier. The opera ends with a Scottish soldier repeating, “It was the most amazing thing. I shall never forget it.”