It was George Bernard Shaw who once described opera as the most expensive invention of man, “second only to war”, but he died in 1950 so he can be forgiven for never having witnessed an Apollo launch or Superbowl Halftime Show. Shaw’s pithy compulsion to compare the cost and complexity of opera to that of war was likely influenced by how often those two very human inventions have been linked on stage throughout history. It goes back at least as far as Monteverdi and his brief First Crusade drama IL COMBATTIMENTO DI TANCREDI E CLORINDA (1624) and continues into our current time with important new works like SILENT NIGHT.

Is it surprising that the Christmas Truce of 1914 had not been successfully produced for the opera stage before Kevin Puts and Mark Campbell did it in 2011, given how humane and innately theatrical the story is on paper? It should be, but for most of the preceding centuries, operatic wars, though indeed a plot device with a wide variety of libretto applications, were rarely required to be the setting and the substance. Instead, those projected hostilities served principally as backdrops for more intimate dramas like love, betrayal, honor and struggle. The soldiers of the opera house, as common to the art form as wicked stepmothers in fairy tales, were always either just back from or desperately close to shipping out to some off-scene conflict, the seriousness or silliness of which informing their nobility, cunning or plain old joie de vivre, depending on what the story demanded.

There are many examples of this, both large and small. The fighting men of Donizetti’s comedy LA FILLE DU RÉGIMENT (and L’ELISER D’AMORE to a slightly lesser extent) are an unwitting Greek chorus in most productions, punctuating the libretto’s funny moments with fitting group reactions and harmless military bluster. Their job is to confirm punchlines, not spend time on actual frontlines. But the victorious troops of General Radamès are another matter entirely. When they return to Egypt in Verdi’s AIDA, it is clear that they have been fighting and their famous triumphal march through the gates of the city is an overwhelming spectacle, meant to ensure public favor for their leader and buy him time to figure out how to be with the Ethiopian slave he secretly loves. The list continues. Impending war is cause for good cheer and a rousing toast in Gounod’s FAUST, it is a false pretext for tricking and testing fiancées in Mozart’s COSÌ FAN TUTTE and a punishment for poor conscripted Cherubino in his other comic masterpiece LE NOZZE DE FIGARO. There is a lightness to each of these moments, even in AIDA to a degree, that casually sets aside the realities of war. But that is not always the case. 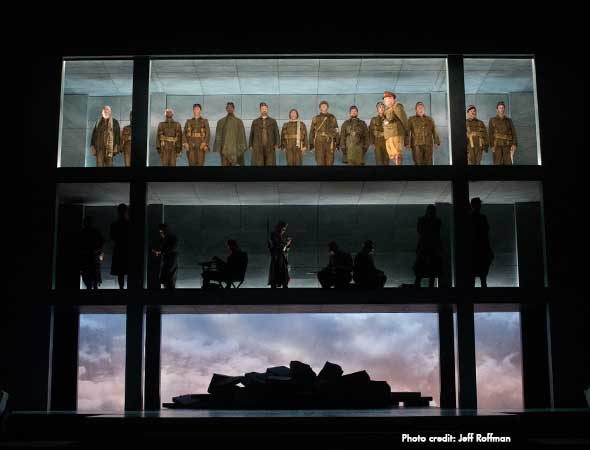 Some libretti do confront the darker truths of armed human conflict, and often do so in intentionally provocative ways. The title character of Berg’s WOZZECK, for instance, is a shell-shocked Great War veteran who commits a shocking murder because of the depredations he has witnessed and suffered personally. It is a harrowing and unflinching portrait of war and the people who survive it, one the troubled bomb expert at the heart of Beck’s contemporary chamber drama THE LONG WALK (2015) would certainly understand. Others have tackled the theme more grandly, like Prokofiev’s WAR AND PEACE. Berlioz’s LES TROYENS depicts the ancient sacking of Troy and doesn’t shy away from the horrors that follow such an event. The Trojan War actually features prominently in quite a few operatic creations like Purcell’s DIDO AND AENEAS, Offenbach’s LA BELLE HÉLÈNE and Tippett’s KING PRIAM to name just a few. In each of these more explicit stories, war is front and center contextually, but still mostly beneath the surface for much of the telling. We are not often taken all the way to the trenches.

In SILENT NIGHT, however, we are right there with the troops as they fight and then choose for brief moment not to. There is no buffer this time, no narrative contrivances like a memory or a diffuse sense of foreboding to distance us from the truth about the places we send men to die. The miraculous nature of the ceasefire is counterbalanced by the violence immediately preceding it and, for this story to work, we have to see both, live through it with the soldiers themselves. References to some battle fought sometime before the curtain can’t carry near enough weight because, what works well for a comedy falls short in a historical drama. It’s humorous when Cherubino is forced by his boss to join the army because we never have to experience what the means for him and when he returns later in the action, it doesn’t seem like he had to experience it either. The contrast between his service and that of Wozzeck is stark and it represents how effortlessly opera can play both sides of such a big thematic template.

Shaw’s clever bon mot about the economics of opera and war doesn’t hold up to modern scrutiny. But it is worth recognizing that, of all the performing arts, his attention was drawn to the one most equipped to handle something as fraught and complex as the national confrontations we wage, and he inadvertently pointed us in the direction of something that continues to be a lot more worthy of our wealth.