The Pilot explains that, when he was six years old, he saw a picture of a wild beast being eaten by a boa constrictor. This inspired him to draw a picture of his own, showing the snake digesting its prey. But the grownups he showed it to discouraged him from drawing and told him to concentrate on conventional subjects. Now he is a pilot, flying far above the earth among the stars.

The stars sing to each other, and a group of stars above the Sahara sees a sandstorm forcing the Pilot’s airplane to the ground. The Pilot is reflecting on the danger he is in when a curious little boy—the Little Prince—appears. He asks the Pilot to draw him a sheep. Intrigued, the Pilot tries to learn more about the boy.

Gradually, the Little Prince tells his story. He explains that he comes from a tiny planet, Asteroid B-612, which is in danger of being taken over by enormous baobab trees. This is why he wants a sheep in the first place: he hopes it will eat the baobab sprouts. He is worried, however, that the sheep will also eat flowers, as there is a special flower—a Rose—that the Little Prince wants very much to protect. The Pilot promises to draw a muzzle for the sheep so that it can’t eat the flower.

The Pilot describes the Little Prince nurturing his Rose and waiting for her to come into bloom. When the Prince learns that her greatest fear is of catching a chill, he hastens to find a dome. She rebukes him sharply: placing her under a glass is not the way to please her. She urges him to seek wisdom in the worlds around him, and then return to her.

A flock of birds takes the Little Prince on his journey. He visits the planets of a King, a Vain Man, a Drunkard, a Businessman, and a Lamplighter. The Little Prince is bewildered by the behavior of all these grownups, except the Lamplighter, whom he respects—by tending his lamp, he is doing something useful. The Little Prince thinks anxiously about his beloved flower, whom he has left alone and defenseless. Determined to continue his travels, however, he flies on to the planet Earth. 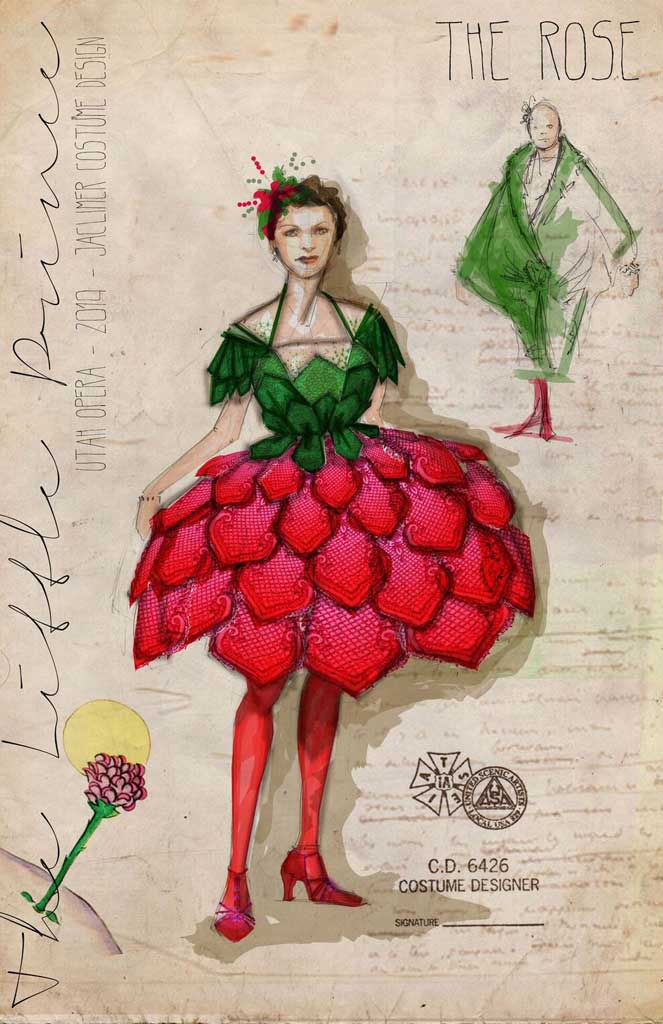 Jacob A. Climer – design for The Little Prince (The Rose)

The Little Prince arrives on Earth and meets a Snake, who cryptically claims that with one touch, he can send him back to the place from which he came. “I’ll help you find your way back home,” the Snake promises.

The Little Prince continues exploring Earth and finds a rose garden. He is distressed to see so many beautiful flowers, because he thought his Rose was the only one of her kind. Fox hunters appear with their guns. Once they have gone, their quarry comes out of hiding. The Little Prince asks the Fox to play with him. But the Fox refuses, saying, “I’ve not been tamed.” The Little Prince learns what “taming” means. “Tamers care for what they’ve tamed. You’ll always be responsible for your Rose,” the Fox explains. The Prince realizes that his Rose is, after all, unique, because of his love for her.

The Prince has finished recounting his adventures, and the Pilot reminds him that it’s been eight days since his plane crash and they are running out of water.

They set off in search of a well, and are refreshed and saved by the water they find. But the Little Prince’s visit to Earth is coming to an end. He tells the Pilot to go back to his plane and return the next night. Filled with dread, the Pilot leaves. When he comes back, he finds the Little Prince making an agreement with the Snake. The Prince tells the Pilot that it is time for him to return to his planet. He reassures him that he is not about to die, and that his body is just a shell: “Anything essential is invisible to the eye.” The Snake strikes and the Little Prince disappears, leaving the Pilot alone in the desert. The Pilot addresses the audience: “Wait a while beneath a star, and if a child arrives with golden hair, who laughs and disappears, make sure you tell me he’s returned.”