After some 62 years the greatest performance ever recorded of Tosca remains the EMI studio recording from 1953, with Maria Callas in the title role; Giuseppe di Stefano, in glorious voice, as her lover Cavaradossi, and Tito Gobbi  as their implacable enemy.  Victor de Sabata conducts the orchestra and chorus of La Scala (where the comprimarii , i.e. the lesser roles, come from);  the orchestra plays as if each member might be Scarpia’s next victim! 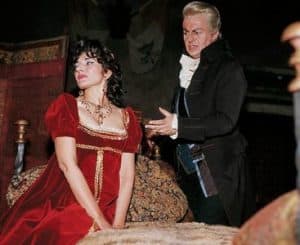 Youtube has the entire Second Act of the famous 1964 production at London’s Covent Garden, with Maria Callas, Tito Gobbi and Renato Cioni, directed by Franco Zeffirelli.

You DIVA-Lovers of a certain age might be interested in two other performances captured live from Covent Garden:   Renata Tebaldi in 1955, with Ferruccio Tagliavini and Tito Gobbi;   two years later   Zinka Milanov sang the role with Franco Corelli and the stunning, and stunningly under-rated Giangiacomo Guelfi. Tebaldi made at least 2 studio recordings of the role, and there’s a DVD performance, with George London, from Stuttgart in 1961. By the way!  EMI, in 1929, recorded Tosca with the orchestra and chorus of Milan’s La Scala, conducted by Carlo Sabajno;  Tosca was sung by Carmen Melis, who became Tebaldi’s teacher.

Speaking of live performances (which we did, a paragraph-and-a-half above), two capture the legendary soprano Magda Olivero:  one is sound only from Verona; the other is a DVD from Italian Radio in Turin from 1961. It was only in 1975, when she was 65, that the Met finally deigned to offer her a few performances of Tosca.   New York critics were electrified.

But not the folk who really knew opera singers:  they knew she was the real thing when it came to the operas of Puccini and his contemporaries.  A few years before her much-belated Metropolitan Opera debut, I was a music student in Dublin. The Theatre Department’s Bulletin Board invited anyone interested in being a “super” in the upcoming Dublin Grand Opera Company’s productions of Tosca and Turandot  to show up at the theatre some 2 hours before opening-night curtain.  I did, and was cast as a Senator (the costume fit me!) in the Procession that ends Act I of the opera.  No memory of who the guys were, but Olivero was Tosca and every performance (I think there were 5) I watched her in Act Two from various theatrical vantage-points. An extraordinary performer! 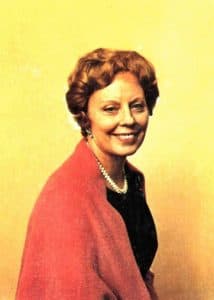 But, I hear you say, there must be other, more recent, recordings, no? The simple answer is “Yes, there are.” Both Mirella Freni and Kiri Te Kanawa recorded the role. Leontyne Price was Karajan’s choice for his studio recording in 1962, but there’s an earlier performance from the Met that same year, with Franco Corelli and Cornell MacNeil, which delivers the full-blooded Italiate singing that can only come from a live performance. There’s a DVD, from Zurich, with Jonas Kaufmann as Cavaradossi, and another from Covent Garden, with Angela Gheorgiu.

Three DVDs come from performances at the Metropolitan Opera. The earliest, from 1978, stars the glorious voice of the young Pavarotti. (I heard him live in 1975, and it was, indeed, a glorious voice). In this production, he was joined by Shirley Verrett and Cornell MacNeil.  1985 saw a live transmission of a new production by Franco Zeffirello, with Hildegard Behrens, Placido Domingo and Cornell MacNeil in the principal roles;  Giuseppe Sinopoli conducted.  A new production, generally despised, opened the 2009 season, and this third DVD, filmed in 2010, stars Karita Mattila, with Marcello Alvarez as her lover.

In 2013, a movie of the opera was released, with Catherine Malfitano, Placido Domingo and Ruggiero Raimondi in the principal roles; the conductor was Zubin Mehta.  Its claim to fame was that each act was filmed in the exact location specified in Puccini’s score.

When choosing which recording you wish to own, choose your favorite singer, be it the soprano, the tenor or the baritone – even the conductor!  As someone in some movie said:  “Indulge yourselves!”