I’ve selected some of my favorite musical moments from Florencia en el Amazonas and shared some thoughts and observations about each. The music of Florencia is through-composed for each act, meaning there are rarely endings or pauses between scenes; instead most scenes are linked through descriptive orchestral interludes. Use of this style gives the opera a very cinematic feel, where each moment leads directly to the next. 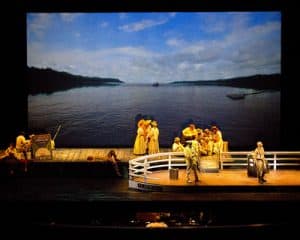 Florencia Selection 1 – The opera opens with a harp flourish as the journey of the riverboat El Dorado commences from the busy port of Leticia, Colombia. Harp glissandi and undulating wind figures of energy lead into cries from the crowd of merchants gathered dockside to sell their wares. Riolobo, our “tour guide” for this journey is the first voice we hear other than chorus, singing his version of “once upon a time.” He explains that people have been waiting for years to hear Florencia Grimaldi sing again in her native land. (“Hace años que esperabamos este momento…”) The tonality remains predominantly C major, though we visit other harmonies from E major to extended C# minor. 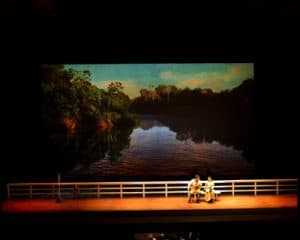 Florencia Selection 2 – The next morning dawn is breaking over the river vista and the jungle birds are greeting the new day. In a colorful instrumental interlude, Catán imitates the calls of the various exotic animals with complicated layering of solo lines for all the wind instruments. Grace notes, arpeggios and trills provide the voices of the toucans, macaws, and other avian creatures. The appearance of the sun is indicated through the addition of brass to the instrumental texture. 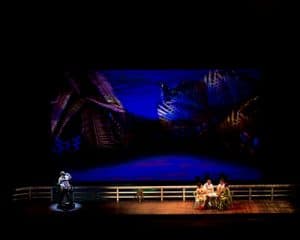 Florencia Selection 3 – Much of Daniel’s style is almost an accompanied recitative or what we call “arioso,” where the vocal lines are closely tied to the rhythms of speech. Most of his duets and larger ensembles involve alternation of singing between characters. One of the wonderful moments where he writes a true ensemble where 4 characters actually sing at the same time is the “card quartet,” scene seven of the first act. We have a wonderful juxtaposition of two couples at different stages in their relationships. Paula and Alvaro are a married couple who have lost their “spark,” and Rosalba and Arcadio are young people just finding that a spark between them exists. The humor of the scene borders on cynicism, as the older couple sends verbal darts back and forth. Their acerbic speech is highlighted by the wooden sound of the marimba. The quartet then moves into a short duet between the young people, where they hope for a better ending to their budding romance. 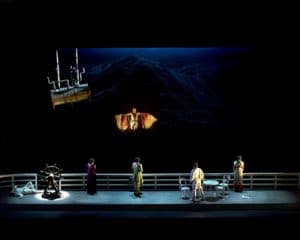 Florencia Selection 4 – El Dorado enters stormy weather as Act I heads to its climax. A pulsating rhythm and overlapping vocal lines leads to a thrilling invocation to the deities of the Amazon. Riolobo is revealed as far more than just a deckhand. Wide leaps in the vocal line and mysterious harmonies and high string harmonics add to the otherworldly moment. The chorus joins Riolobo from backstage as disembodied voices of the elements or the jungle, however one might interpret them. The act ends with disaster as the El Dorado runs aground. 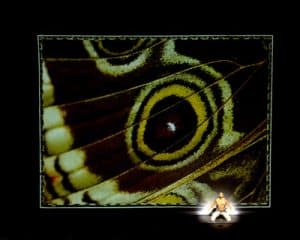 Florencia Selection 5 – Act II opens veiled in mystery, as the passengers revive from the trauma of the impact. This opening is one of the less tonal moments in the opera, perfectly reflecting the manner in which everyone’s life has been turned upside-down. A solo trumpet plays an arpeggiated figure that contains all twelve tones of the Western scale, adding to the sense of disorientation. Echoes of the storm music follow as a lead-in to Florencia’s monologue as she is the first to revive. 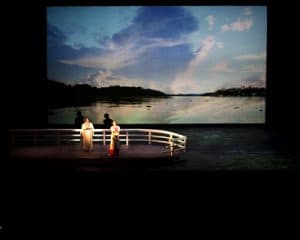 Florencia Selection 6– As the characters return to life one by one, several reunions occur. One of the most rapturous is when Arcadio and Rosalba realize they both survived. They sing a love duet that is almost an anti-love duet, denying that they will ever compromise their dreams by something as trivial as love. Metaphors of love as a “jungle where mandrakes grow and serpents nest” are accompanied by Puccini-esque vocal lines, some of the most lyrical, Italianate vocal writing in the opera. 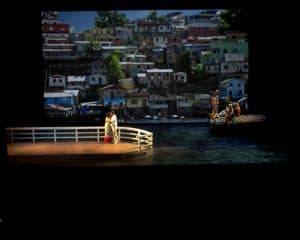 Florencia Selection 7 – The final orchestral interlude heralds the sighting of Manaus, our journey’s end. The triumphant and ecstatic music accompanying the arrival also announces a resolution to the love woes of our two couples. Layering of trills and arpeggios in all instruments reflects the excitement and joy of this arrival. Echoes of a slow rumba accompany Florencia’s chanting of the name “Manaus” as almost a mantra of joy. This joyous ensemble is interrupted unceremoniously by Riolobo’s discovery that Manaus is quarantined due to a cholera epidemic, and a sudden switch from harmony to dissonance underscores the derailing of all the characters’ plans. 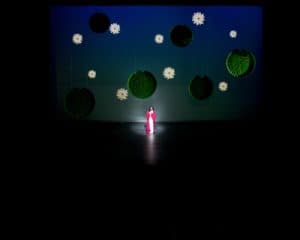 Florencia Selection 8 – The final scene, for Florencia alone, has been compared to the great final scene of Richard Wagner’s Tristan und Isolde, the Liebestod or Love-Death. Certainly in length the two scenes are comparable; both scenes are vocally the most demanding music for the lead soprano in the entire opera. Transformation is the main theme of each scene; Isolde undergoes the journey from life to death, and Florencia, well we aren’t really certain, when all is said and done, what actually DOES happen. Does she really metamorphose into the Emerald Muse Butterfly? Does she die? Does she just move on to the next chapter of her life, forever changed by her Amazon journey? I think we are left to make these conclusions on our own, but we can all agree that her final scene is hypnotic and transformative to listeners as well as to the character herself. 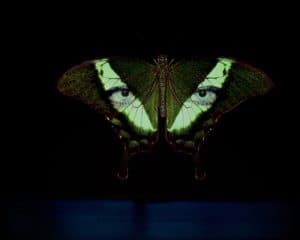