I hope my chapters discussing the conception of Puccini’s Madama Butterfly; her subsequent development in utero, as ’twere; her difficult birth, and immediate removal to a (musical) neonatal intensive-care unit, have whetted your appetite to see Utah Opera’s production of what has become one of the most popular operas of all time. Maybe you’ve been whetted to delve deeper into some aspect or other of the piece. Here’s a list of sources I’ve used in my research: I can’t guarantee that each is available at your local library (I’m fortunate that my “local” is the Marriott at the University of Utah!), but I’m sure your local librarian will be glad to fulfill your request(s).

Arthur Groos, (ed). Madama Butterfly: fonti e documenti della genesi. Which translates as “MB: sources and documents about its creation”. Published by the Center for Puccini Studies, it sounds intimidating if you don’t understand Italian; but, have no worries: each chapter is published in Italian and in English. Groos is also the author of two “scholarly articles” I came across – but don’t let that term intimidate you either! “Lieutenant F. B. Pinkerton: Problems in the Genesis of an Operatic Hero”, was published in a journal called Italica (Vol. 64. No. 4. Winter, 1987). In the July, 1991 issue of Cambridge Opera Journal (Vol. 3, No.2, to be bibliographically precise!) is “Madame Butterfly: The Story.” This is the more interesting. Not only does he discuss Jennie Correll’s memories of the situation that inspired her brother to write his short-ish story, but he comes up with a very plausible (and, based on the included picture, a very handsome) candidate for the American Naval Officer who became Pinkerton.

Nicholas John, (ed). Madama Butterfly. This is the 26th of English National Opera guides. These booklets (48 at last count) include the original-language libretto paralleled with the English version sung , more or less, by the ENO, whose productions are always in English. The published libretto is the one sung at the original fiasco at La Scala in 1904. Footnotes detail the various cuts and changes that happened over the next two years; the changes made for the French première in 1906 (Puccini objected to some of them) became, when translated back into Italian, the score we know and love today. The original libretto makes for fascinating reading. Also included is John Luther Long’s story, which David Belasco turned into the one-act play Puccini saw in London. And there’s an essay by Julian Smith about the musical elements of the opera as it was first performed at La Scala, and their post-fiasco revisions. (Smith conducted the revival, at Welsh National Opera in 1980, of that disaster, discreetly orchestrating and, perhaps, composing, where necessary.)
Pierre Loti. Madame Chrysanthème. This is the literary egg from which Butterfly, through her various larval and pupal stages, developed.

Jan van Rij. Madame Butterfly. Japonisme, Puccini, and the Search for the real Cho-Cho-San. A mouthful of a title! This short book (less than 200 pages) traces the history of the West’s interaction with Japan; then a chapter on Long’s story inspired by his missionary sister (with maps and photographs which explain and show the various locations in Nagasaki); then one on Belasco’s stage-adaptation; one on Puccini’s operatic version; and lastly the search for, and identification of, the son who might possibly have become “Trouble/Joy” in the opera.
Arthur Quinn, (ed). The Literature of America: an Anthology of Prose and Verse. Volume II: From the Civil War to the Present. (Published by Charles Scribner’s Sons in 1929). This includes, in Chapter XIV: “The Modern Romantic Drama,” the script of Madame Butterfly, credited to Belasco and Long.

Julian Budden. Puccini. His Life and Works. This book is one of “The Master Musician Series: the Lives and Music of the Great Composers”, published now by Oxford University Press. This series of composers’ biographies began over a century ago, but I’ve not been able to discover who the original “Master Musicians” were. Sir (his knighthood was inherited, not earned) Charles Hubert Hastings Parry, (1848 – 1918) who taught composition at the Royal College of Music in London (Vaughan-Williams was one of his students there) and was also Professor of Music at Oxford University, opined that those who loved opera (except for Wagner-lovers) had the lowest musical taste. Apparently the second volume of the series was devoted to that German composer, but it wasn’t until 2002 that this superb book, discussing not only Puccini’s operas, but also his life as it impinged on his work, was published! Budden knows his Italian Opera: his 3-volume study of Verdi’s operas will never be surpassed. His Puccini book will remain the standard for many years to come.

Mosco Carner. Puccini: a Critical Biography. Published in 1958,this was the first serious examination of Puccini as a “real” composer and not as a purveyor of “popular tunes” which would fit on one side of a 78rpm record and would, sung by a Caruso or a Gigli, sell like hot cakes! It’s useful to remember that, while the original Italian audiences loved Puccini’s operas, the first Italian critics expressed reservations on dramatic or musical grounds: Fausto Torrefranco excoriated him in a book published in 1912. Initially British audiences and critics embraced Puccini’s operas, but it seems that the more popular his operas became the less those “Brit-crits” respected them. Carner, who had already written about Alban Berg – that weird 12-tone composer of Wozzeck (and let’s not even mention his unfinished opera Lulu!) – seemed an unlikely advocate for such a lushly romantic Italian composer of operas as was Puccini. Maybe it was that apparent critical dichotomy that gave pause to those (mostly 12-toners) who turned up their noses at the raw emotion Puccini expressed in his writing, and made them re-consider such moments of passionate out-pouring as Butterfly’s heartbreaking farewell to her child. Maybe, Carner argued, this music expresses genuine emotion. “OMG…”, thought those nose-turners, in their pre-Internet innocence, “…music demands an emotional response from us, rather than an intellectual one?” As one of the most quoted of today’s pop-culture icons might say: “Duh?” Puccini’s music comes, first of all, from his emotional response, for better or for worse, to the dramatic situation; the resulting music, again for better or worse, must elicit a similar emotional response from the audience. To those of us who respond emotionally to music, much of Puccini, and most of Madama Butterfly, is triumphantly successful, and, when the final curtain falls, we are reduced to a sort of sobbing-incoherence. The intellectual, should he condescend to attend, will leave unmoved. Mosco Carner was the first writer on musical matters to “get” Puccini, and discuss him seriously. Since its initial publication in 1958, study of Puccini as a composer has proceeded apace, but Carner remains important as a foundation on which our later, and now contemporary, appreciation of Puccini is based. 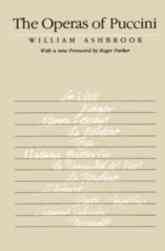 William Ashbrook’s The Operas of Puccini was first published in 1968. It’s a straightforward, well-written discussion of the operas, with lots of musical examples. Because he opts for a chronological order there are Butterfly references both before and after his chapter on the opera. And he was a fan of the composer: his book begins with “A Personal Note” whose first sentence reads “I can truthfully say I cannot remember when I did not know Puccini’s music.” A few paragraphs later he writes: “Even those people who know nothing about music in a technical way find in [Puccini’s operas] points of direct contact, moments of identification that stir them deeply.” Amen!
Enjoy whetting!