Opera Novellini: Madame Butterfly
Utah Opera 2014-15 Season
A compressed and stylized version of the Madame Butterfly libretto written by L. Illica and G. Giacosa, based on the book by John L. Long and the drama by David Belasco, translated to English by John Gutman. 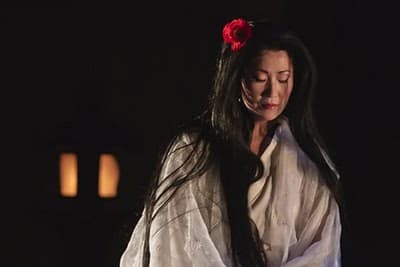 CHAPTER 1
Benjamin Franklin Pinkerton, a lieutenant in the United States Navy, took in the smell of the falling petals that were caught in the wind from the blossoming trees and sighed with a smile. He followed Goro, his marriage broker who lead him from room to room bowing at every small detail of Pinkerton’s new house. Goro had just introduced his housemaid, cook, and house boy, and Pinkerton took a moment to think about how his life was about to change. With a joyful exuberance, he smiled to himself.
The new housemaid, Suzuki, had already impressed upon him her penchant for chatter. Women are the same everywhere, they babble like parrots, he thought.  The boy and the cook seemed all too nervous, but he paid little mind. After all, it wasn’t about them; it was about her, Cio-Cio-San. He would have her all to himself.
“Is everything ready, Goro?”
“Yes,” Goro replied. “Every detail is in place. First, you will see the Registrar, her family and friends, your Consul General, and then your promised.”
“You are the perfect broker!” Pinkerton exclaimed. Then he bit his lip at the next thought. “Are there many relatives?”
“Her grandmother, Uncle Bonzo—although he will not be attending—the cousins, a couple dozen. But in regards to descendants,” he continued with an eager smile, “they will be taken care of by you and the lovely butterfly.”