As the Resident Artists of Utah Opera, we’re often called upon to perform what the company calls “Random Acts of Opera” in various locations. On this particular occasion, we were asked to sing at the Dinosaur National Monument in Vernal, UT. This being my (and the rest of my colleagues, with the exception of Jessica) first tour and first go around with “Random Acts of Opera”, I was pretty excited. Not to mention…DINOSAURS??!!!?? Awesome!!

It was raining as we drove to the monument and we all were worried that we wouldn’t have too many audience members. Thankfully, this was not the case. We drove through the gate and were greeted at the door of the Dinosaur National Monument’s Quarry Exhibit Hall by the smiling face of Interpretive Operations Supervisor and Dinosaur Centennial Coordinator Sonya Popelka, who promptly led us inside and showed us where we would be set up.

If you’re not familiar with the Quarry Exhibit Hall at Dinosaur National Monument, I shall attempt to describe it (though, I encourage you to visit it for yourself). It is a large building, with mostly glass walls (we were told this was to let the visitor see the fossils in the environmental context in which they were discovered), built around a large sandstone wall. This is the original sandstone of the land surrounding it and contains a large collection (approximately 1,500) of visible dinosaur fossils. To say we were in awe would be an understatement. There is a ground level and an observation deck area at a higher level to better see the fossils near the ceiling. We were to be set up in the observation deck area for our performance. Sonya was extremely helpful in finding us an outlet for the keyboard and helping us pick out the best spot to perform. 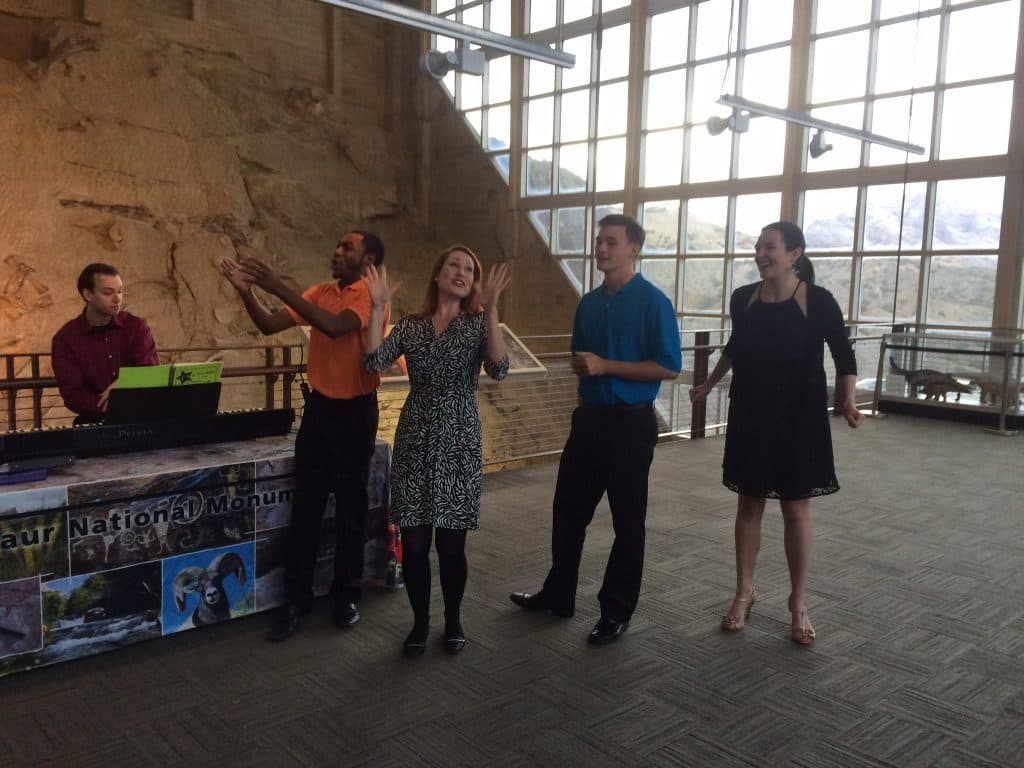 Then, we began! Jessica and I started the program with the “Flower Duet” from Lakmé. The acoustics in the building were wonderful! One couldn’t help but be aware that those sound waves were bouncing off of the bones of dinosaurs that roamed the Earth 149 million years ago. As Sonya commented after the performance, “You have to think of all of the crazy noises that happened here millions of years ago.”  We made our own sort of “noises” in the space, but I think we all felt a little humbled by our posthumous audience and hoped they would have enjoyed it.

The performance went well and was very well received! Park Rangers and other Monument patrons were very enthused and glad to have heard something a little unexpected in the space. We had a wonderful time and were just about ready to head back to the hotel. Little did we know, our adventure was just beginning.

Before we left, we were introduced to Park Paleontologist Dan Chure. He was extremely kind and told us how much he enjoyed our performance. In what I assumed was casual small talk, he asked how long we’d be in the Vernal, UT area. We told him we would be leaving on Friday. He then offered, if we had time the next day, to give us a personal tour of the museum and to…wait for it…let us climb the fossil wall!!! We all immediately checked our calendars on our phones and found that we’d be free to come back the next day at around 2pm. Phone numbers were exchanged and anticipation for the next day began!

Day 2: Who Wants to be an Operasaur?

We performed our school shows in the morning, ate lunch, changed, and then made our way back to Dinosaur National Monument. It was a much sunnier day, which brightened the rocks around the Quarry Hall and gave us another perspective of the area. We arrived to find that the fabulous Sonya Popelka (remember her?) had come in on her DAY OFF to hang out and climb the wall with us! She’s the coolest. We met up with Dan and he went over basic safety rules: to lean into the wall since it’s at an angle, sit down if the height starts bothering you, etc. We then began the ascent. 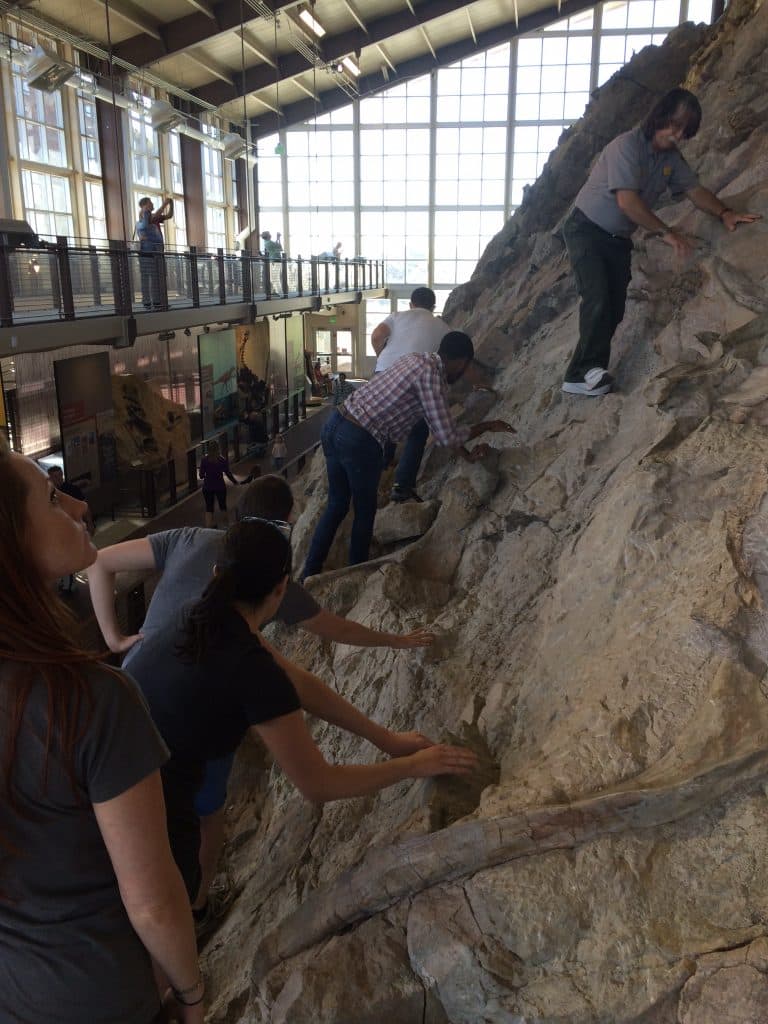 There were a series of footholds made in the rock in order to get up to the 10-foot high ledge.

Dan gave us information about the fossils, pointed out what some were, and answered any questions that we had. I won’t attempt to relay all of the information given, since it was a large amount and I’m terrified I’ll misquote and share false knowledge. However, we are all so grateful to Dan and Sonya for the time they took and the information they shared with us. We all learned so much and, if you go the Monument, seek these people out! Talk to them! They are incredibly knowledgeable and have so much to share!

Dan was incredible to watch. He would stand on the slanted rock face, wildly gesticulating with both hands without a hint of balance issues (while the rest of us stayed pretty close to the safety of the wall). Dan mentioned near the end of his talk that this job never gets old for him. Every day he comes in and the fossils still excite him and fill him with wonder. Personally, I know that’s how I feel about singing. It was such a pleasure to share our passion with these people and then to have them give us a glimpse into theirs.

At the end of our journey, Dan said he had a little surprise for us. He told us that his wife had been to the performance the day before and had enjoyed it so much that she decided to give us a little gift. His wife is part of a company called Fossil Reproductions http://www.fossilreproductions.net (Check it out! It’s cool stuff!) and she gifted each of us with an Allosaurus Claw Pendant. Sonya also gave us a few magnets advertising the Centennial of the Monument. Thank you so much to Dan Chure, Mrs. Chure, Sonya Popelka, and all of the amazing folks at Dinosaur National Monument! This was such an incredible experience and you were all so generous with your time and so welcoming to us! Opera can take you anywhere and this is an experience I won’t forget! 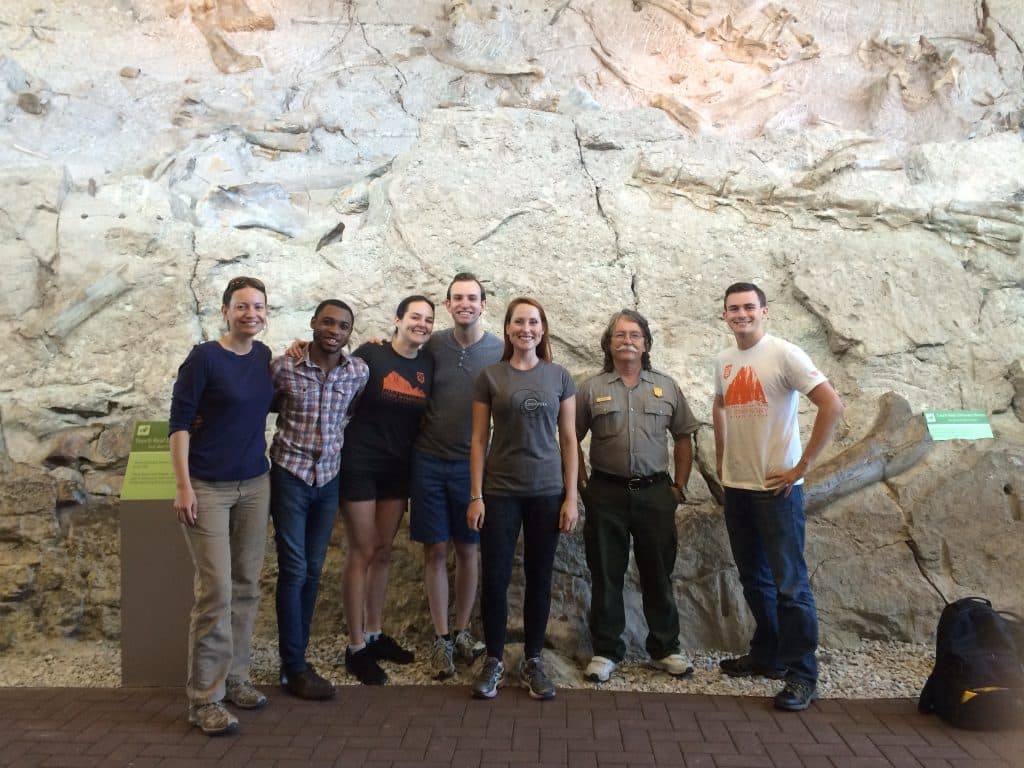 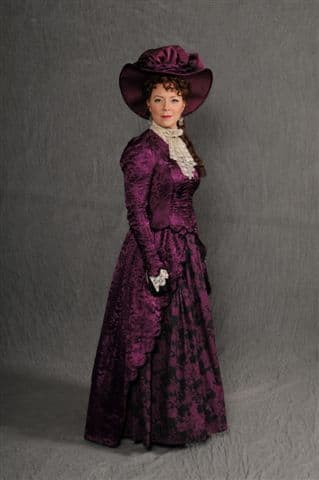 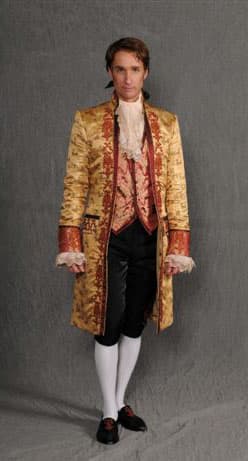 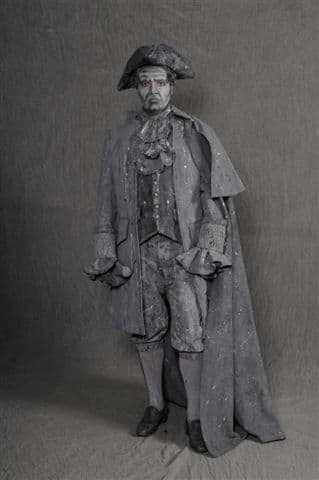 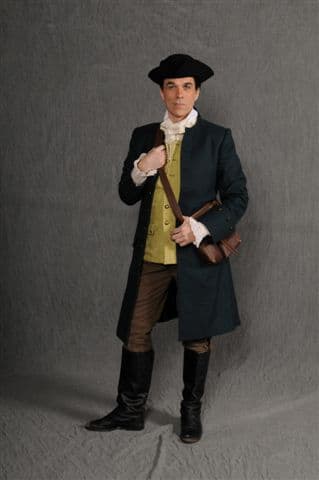