Act 2
An “Entr’acte” – in actuality a Prelude, though it can’t be called that, since, by definition, a “pre-lude” can only be played at the start of the evening –  introduces Act 2. Bassoons give us a melody we will hear later on.  Then strings and winds comment in a variety of keys before finally settling into the major key.   It’s possible that the triplet figure in the final bars should remind us of the similar figure in Carmen’s Sequidilla.
We are now in Carmen’s favorite week-end hang-out (if we can believe her Seguidilla): Lillas Pastia’s dive.  She is there together with Zuniga, Moralès, various soldiers, Frasquita, Mercédès and various gypsies.  Violas, cellos and harp vamp, almost lazily, in E minor.  Flutes introduce a theme which  travels through various keys before coming home to the tonic. According to the original libretto, dinner is over, though the table has not yet been cleared;  a couple of gypsies are playing guitars in a corner;  two are dancing; all are smoking (Nasty Habit!);  Zuniga is talking quietly to Carmen, but she is ignoring him.  Suddenly she gets up and starts to sing a gypsy song in three verses, each one faster than the previous one; Frasquita and Mercédès join her in the “Tra la la” refrains.  The concluding dance gets wilder and more passionate.   “Carmen falls breathless on a bench at the last orchestral chord.”
Pastia himself appears, seeming embarrassed.   He explains that it’s late and he really should close for the night so as not to run foul of the law, which doesn’t look on him kindly at the moment, though he’s not sure why.  Zuniga scoffs at that, saying it’s common knowledge that all the local smugglers meet here.  But if they have to leave, they will and he asks the girls to go with them to the theatre.  Pastia signs to the girls to refuse, which they do.  Zuniga tries to persuade Carmen to join them, but she adamantly refuses.  He wonders, perhaps, that she doesn’t like him because a month ago he sent her to prison.  “I don’t remember going to prison.” No, damn it, you didn’t.   But the brigadier who let you escape was demoted and jailed, but he’s now free.  Good, says Carmen.  All is abbreviated in recitative, and Pastia is reduced to a non-speaking role whose words about closing time are sung by Frasquita.
The dialogue, or recitative, is interrupted by an off-stage male chorus in praise of Escamillo, the Torero.  A torch-lit procession is accompanying the man who, after recent successes in Grenada, promises to become the most famous of all bull-fighters.  Moralès suggests inviting him in for a toast, which Zuniga does, to Pastia’s discomfort.
No sooner on-stage, Escamillo launches into his “Toréador Song,” a swaggering, alpha-male celebration of his prowess in the bull-ring, and, assuming it’s well sung (it’s very difficult), a celebration of the singer’s own prowess.  The first verse is a brilliant evocation of the excitement of the crowd at a bull fight. The refrain, in the major, reminds the Toréador that love awaits him. Of course everyone on-stage joins in a repeat of his refrain or tune, or even, reflecting its popular pronunciation, “chune”  – yes, I know y’all know it, but restrain yourselves!  The second verse is more detailed, noting that a horse is gored, dragging down its rider; the banderillos pierce the bull with more darts. Finally he, and specifically Escamillo, enters the ring to plunge his sword exactly into the spot in the back of the bull’s neck that will kill it instantly:  a highly skilled, not to say dangerous, art. In the coda Frasquita and Mercédès repeat the words “L’amour” to a swooning descent of a 7th, but it is Carmen’s drop to a flattened octave that grabs Escamillo’s attention.

Despite Pastia’s efforts to get rid of the crowd, Escamillo makes his way to Carmen. “Tell me your name so I can speak it when I kill a bull.” Carmen, or Carmencita.  “If I fell in love with you, and wanted to be loved by you, what would you say?” You can love me, but don’t think that, right now, I could love you.   “I’ll wait, and hope.”  I can’t stop you waiting, and it’s always nice to hope.
Another attempt by Moralès to get the girls to join them is rebuffed, but Zuniga tells Carmen that he’ll be back in an hour, after the official call to return to barracks. Not a good idea, says Carmen.  Everyone leaves with Escamillo’s procession, accompanied by the full orchestra playing his “chune.”
Now we learn why Pastia was so anxious to get rid of everyone:  Dancaïre and Remondado have returned and need to talk about “gypsy business.” Dancaïre is obviously the boss of the operation – all business – while Remondado always wants to add colorful details about the place and the people they’ll be dealing with: much of which is eliminated in recitative. They just got back from Gibraltar (pretty place; lots of handsome Englishmen there; a bit standoffish, but distinguished, according to Remendado).  Dancaïre has arranged a smuggling deal; “our people” are ready, but we need you three girls tonight.
In a brilliant Quintet (Bizet, by the way, again changes the text to suit his musical idea) the men explain why the girls are essential to the success of the plan: only they are experts in deception and, it’s implied, seduction.  Carmen, while fully in favor of the idea, says she will join them tomorrow. In sentimentally exaggerated thirds the guys wonder why she could abandon them now.  When she tells them she’s in love the guys are even more mocking:  you’ve never let your love-affairs interfere with your work.   This time is different, she says.  But she agrees, when the main theme returns, that women are essential to this kind of work.  What can one say about this Quintet but “WOW!” Operatic ensembles tend to be dramatically static, with each character voicing his/her reaction to what has just happened.  Here, though, we have a fluid dramatic situation which initially pits two men against three women, then one woman against two men, then against two women, though all are in final agreement that (return of the melody of the men’s statement) women are essential for this kind of operation.  Is there any other operatic ensemble (except maybe the endings of Acts 2 and 3 of Verdi’s Falstaff, which appeared eighteen years later)  which contains such fun, such a sense of that French joie de vivre, not to mention such amazing orchestral writing? No.  It was unique then, and it has stayed unique.  Genius.  Pure and simple. 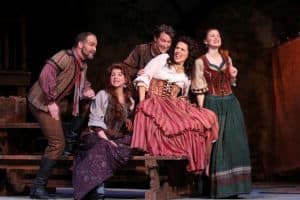 Of course there’ll be applause after this wonderful aria, but Bizet didn’t seem to want it: “No, you don’t love me” says Carmen as soon as the final note is played. And I feel sorry for José, who has just so passionately opened himself emotionally (remember his conservative – repressed? – upbringing), is now rebuffed by that “Non!” Timpani begins a tum-ti-tum rhythm (think, oh ye who love Beethoven’s symphonies, of the rhythm of the main theme of the first movement of his 7th Symphony; or of that of the second movement of his 9th); this rhythm spreads, insidiously, through the entire orchestra.  If, and she sings insinuatingly in 2/4 against the orchestra’s 6/8, you loved me, you’d come with me. (José’s distressed pleas become weaker.)  I’d ride with you on your horse over the mountains, where you wouldn’t have to answer to anyone, especially to a trumpet that calls for lovers to leave each other. The open air becomes a universe, your will is your law, and above all, Freedom.  José is tempted, but with a huge discord from the orchestra, decides that to desert his flag would be a disgrace he could not suffer.    Carmen is incensed.  Sadly, but nobly in Eb he bids her farewell forever.  The orchestra thinks the scene should end in C minor, but a discord interrupts when someone knocks on the door.  Zuniga has returned, as promised; and, as Carmen warned, it’s not a good idea.
Since no-one answers his knocking, Zuniga breaks down the door and comes in. Seeing José there
he first mocks Carmen (exaggerated “romantic” kind of vocal phrase) for her poor choice in selecting the demoted José over himself.  Get out of here, he orders; José refuses and threatens his superior officer.   To hell with jealousy says Carmen and calls for help.  Not only do Remendado and Dancaïre appear, with Frasquita and Mercédès, (we knew they were in the next room), but also appear the entire chorus, now (non-smoking) gypsies.
In music that would not seem out of place in an Offenbach operetta, Carmen, echoed by Rem. and Dan. (who disarm Zuniga) tells him charmingly yet sarcastically that he’s arrived at a most inopportune moment and so must be held for about an hour or so. Somehow, though Rem. and Dan. sing essentially the same music as Carmen, they sound much more dangerous.  Faced with the crowd, Zuniga has no choice but to consent, but he promises vengeance.  Spoils of war, says Dancaïre. Zuniga is led off.
Are you with us now, asks Carmen of José.  Do I have a choice?  Not very gallant.  But soon you will see how great is the freedom we have. The act ends with a huge hymn to liberty, though we might question what on earth is the chorus doing there – why are so many people involved in the smuggling operation – since the earlier Quintet had stressed the importance of just a few women. Drama be damned:  Bizet needed a big choral ending which would set up the opening of the next act. And there’s no denying the power of that hymn to freedom!
©Paul Dorgan