The Writing and Rehearsing of Carmen

The triple-bill of one-act operas (by Bizet, Saint-Saëns and the now unknown Paladilhe) produced at the Opéra Comique in May 1872, was not a great success, lasting only for eleven performances. Nevertheless, something about Bizet’s Djamileh convinced Camille du Locle and Adolphe de Leuven, the co-directors of the company, to commission a three-act opera from its composer, Georges Bizet.  No production date was specified, nor was any libretto suggested.  The critical response to Bizet’s contribution was, at worst, tamely favorable.  His composer-colleagues, especially those younger than he, were more enthusiastic:  Saint-Saëns, one of his fellow-composers that night, wrote a sonnet in his praise, while the 30-year-old Jules Massenet (future composer of Manon, Werther, and Cendrillon, the best known of his twenty-seven, or so, operas) wrote him an enthusiastic letter
Bizet wrote of the commission next month to Paul Lacombe, who, living in Carcassonne, a city in the south-eastern coastal area of France, was one of his “correspondence-course” students: “De Leuven and du Locle have commissioned an opera in 3 acts from me.  Meilhac and Halévy will be my librettists. They’ll write something gai, which I’ll treat in as compact a manner as I can.” Even though no subject had been determined, Adolph de Leuven, one of the co-directors of the Opéra Comique, suggested some possible scenarios.  Before his administrative career, de Leuven had written librettos for Adolphe Adam (1803-1856), whose very traditional works had been great successes at the theatre he now found himself in charge of.   We know Adam best today for that hardy Christmas perennial “O Holy Night,” though, in addition to his many operas, he composed the music for the ballet Giselle.
It’s not clear when Bizet decided on Prosper Mérimée’s novella Carmen as the basis of this new commission; his librettists, Meilhac and Halévy, professed enthusiasm for the subject, as did Camille du Locle, one of the Opéra-Comique’s co-directors.  It was de Leuven who objected: Carmen is killed by her lover…all those gypsies, thieves and cigarette-girls…at a “family theatre” where five or six boxes are taken every night for the purpose of arranging marriages…the audience will be frightened. Impossible!   Halévy assured him that Mérimée’s original would be toned down; a pure young girl would be introduced as a foil to Carmen;  the gypsies would be comic ones;  and the death scene would be “sneaked in” at the end of an act filled with life, sunshine, triumphant processions, ballets and fanfares.    This mollified de Leuven, though he pleaded at the end of the interview not to let her die: “Death on the stage of the Opéra-Comique!  Such a thing has never been seen.  Don’t make her die. I beg of you.”   Finding both the prospect of Carmen itself, and the eventual casting of Célestine Galli-Marié in the title role, distasteful, he resigned in 1874.
Tone Mérimée’s original down the librettists certainly did. When we meet José in the novella he is “the most notorious bandit in Andalusia” and we learn very little of his pre-Carmen life, though he does tell the narrator of his murderous quarrel with an acquaintance.  In the course of the novella, José commits three (four, if we include the earlier one) murders, including that of Carmen;  in the opera there is only one, though in the Act 1 dialogue with Zuniga (lifted almost word-for-word from the novella) he hints at that earlier one.  In the opera, thanks to the introduction of the Micaela character, we see José, the dutiful soldier and son, and witness the destruction of this honorable man after he meets and becomes obsessed with Carmen. The novella-Carmen’s thievery and perpetual lying are gone in the opera, though in the dialogue between Carmen and José before the Seguidilla, she does admit she had lied when she told him she was a Basque like him.
Micaela continues the Opéra-Comique’s tradition of the innocent heroine.   The librettists invented her, not just as a sop to de Leuven and the theatre’s usual audience, nor as a stark contrast to Carmen, but as a kind of gauge by which we can measure José’s descent from the upright man in Act 1 to the jealous deserter in Act 3 who reluctantly agrees to go home to his dying mother, while threatening Carmen with their eventual meeting again. 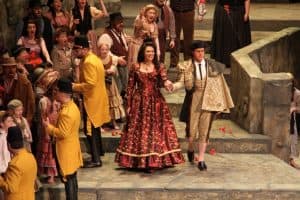 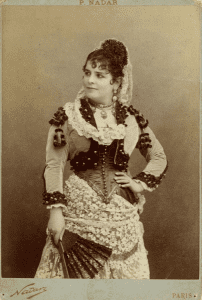 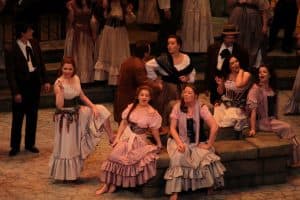 The Chorus, too, was a pretty traditional bunch, used to coming on stage in their voice-type groups, standing still, facing front and staring at the conductor, and singing fairly innocuous music.  But Bizet wanted the Cigarette Ladies to enter in twos and threes before singing their tricky “Smoking Chorus.”    Harder still was the Fight chorus which demanded that they sing very complicated music at a very fast tempo, with the very real danger of the whole thing falling apart.  AND they were expected to move while singing!!  In their defense it should be said that, even today, it remains one of the most difficult of all choruses in opera.  After two months of rehearsal they declared both choruses impossible and threatened to strike.  In mid-February, Bizet asked for ten more voices to beef up the sound of the women;  du Locle, though he thought the extra voices unnecessary, gave in.
In January of 1875 daily rehearsals began, which the librettists were now free to attend.  At which point they got cold feet and tried to tone down the effect of their adaptation;  they particularly objected to what they considered the “vulgar and unrestrained” acting of Galli-Marié. But to no avail. Du Locle wanted the Act 2 duet between Carmen and José shortened and broken up into sections to allow for applause; Bizet refused.  Then he decided that the ending had to be changed and called in the director of the Comédie-Française (who hated the piece) to suggest how it might be done.  This time Bizet was joined in his refusal by Galli-Marié and Paul Lhérie (José) who said they would quit the production rather than accept any changes.
Bizet may have stubbornly refused to give in to du Locle’s suggested changes, but he was quite amenable to making changes to accommodate his singers.  We saw earlier that he added an aria in Act 1 for the baritone singing Moralès.  He also altered some of Lhéri’s music in his duets.  Ernest Guiraud (a close friend of the composer and the guy who would later provide the recitatives) claims that Galli-Marié insisted that her entrance aria be rewritten thirteen times, though the exact number may never be known!  She wanted an aria, preferably Spanish-folk-song-like, which would immediately establish her character as a gypsy, not herself as the prima donna of an opera.  She suggested something Spanish-folk-like;  eventually (and maybe in desperation), Bizet adapted a tune by a popular Spanish composer, Sebastián Iradier and jettisoned Halévy’s text in favor of his own.  (In the first published piano-vocal score this borrowing was acknowledged, but that gradually disappeared with the various reprints.) He also, by the way, rewrote the text for Carmen’s solo in the “Card Trio” in Act 3.
But, at four and a half hours (including three 30-minute intermissions), the evening was too long for Opéra-Comique audiences.  Cuts had to be made. The aria for Moralès in Act 1, added during rehearsals, survived for the first thirty performances, after which it was removed. The little canon that played under the dialogue between Moralès and José during the changing of the guard went, though it hardly saves any time, since it is perfectly timed to their conversation. The exit music of the guard after this dialogue was shortened as was the orchestral introduction to the Cigarette Chorus (which also lost a section for the male chorus towards the end).  The guards’ interjections during the Fight Chorus was cut, together with some of the ladies’ music, which must have pleased them somewhat.  In Act 2 the music surrounding Escamillo’s entrance and exit was tightened up.  The unkindest cut of all was Carmen’s mocking reply, accompanied by sneering violins, to one of José’s impassioned statements in their duet, later in that act. The vicious fight between José and Escamillo in Act 3 was rendered less vicious by the removal of some eighty bars, which may have pleased the singers (it ain’t easy to sing while fighting viciously!); and the ending of the act was made more compact. The ending of the last act was also shortened.
All of these cuts were made, or sanctioned, by Bizet, though not all of them made it into the first edition of the piano-vocal score, which appeared within days of the opening; they were removed, though, from the second edition.  They raise an interesting question.  Bizet, during rehearsals, fought so determinedly, and successfully, with the management to preserve the integrity of his musical drama.  Why, when it became a matter of shortening the performance time, did he not cut the three orchestral interludes (French term is entr’acte) played before the “real” orchestral introductions to Acts 2, 3, and 4 began?     They add nothing to the drama, and cutting them would have preserved some of the integrity Bizet fought for.  But they were never threatened with elimination – maybe (just a thought) because, since the orchestra had objected to the score as “unplayable,” it was politic for Bizet to flatter them with these non-vocal pieces which featured individual players as soloists. 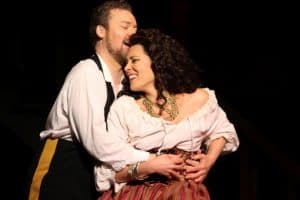 Music under dialogue is always a problem: the ear is always divided between the two, even when the music we hear is hinting, as it so often does in Rodgers and Hammerstein’s works, at a song which will emerge from that dialogue.  Clever though Bizet’s canon is under the Moralès/José dialogue, its very cleverness is distracting in performance to a musician, while its presence is distracting to someone listening to the dialogue:  so cut it!  Abbreviating music composed to cover entrances and exits is almost a given, since a composer can never be sure how long it will take to get people on and off the stage.  I confess to missing the male chorus at the end of the Cigarette Chorus, because it’s so interesting musically. Cutting the soldiers’ contribution to the “Fight Chorus” might have saved a minute or two, but what we now see on-stage is a virtual riot from the women with the soldiers vocally standing by: why, in trying to restrain these very unruly women, would they not sing?  In the duet between Carmen and José in Act 2, Bizet’s cutting of one of his most brilliant musical illustrations of Carmen is beyond me.  Off-stage trumpets are heard, calling José back to barracks.  Passionately he tells her of his agony at having to leave her, because no woman has ever had such an effect on him.  Originally Carmen mockingly repeated his words, in a new tonality, while sneering strings echoed the ends of her phrases.  Brilliant!
Was Bizet, perhaps, starting to doubt the musical-dramatical integrity for which he so passionately fought, and so agreed to these cuts?  And was it this realization which contributed to his post-performance depression, noted by his friends?  We’ll never know.  Nor shall we ever know how Bizet wanted his opera – a supreme masterpiece of musical-drama – to be performed.  Utah Opera audiences can expect that what they hear in productions of, say, Tosca; Salome; or Falstaff will remain the same each time they come to a performance of those opera.  Not so with Carmen, where our reactions to characters and events can change, depending on whether the production opts for recitative (all-sung) or dialogue.  This time around you will hear the version with dialogue. When the company brings back the opera in five or six years, it may be the recitative version.  Stay tuned!