Miguel de Cervantes, playwright, poet, actor, and tax collector, has been impressed by the Spanish Inquisition for his attempt to collect taxes from the Catholic Church. Accompanied by his manservant, both are imprisoned in a seedy dungeon.

There, he is dragged before his fellow prisoners who threaten to subject him to a mock trial who plan to confiscate his possessions including the uncompleted manuscript of a novel, Don Quixote. Cervantes, seeking to save the manuscript, proposes his defense in the form of a play. The “court” agrees, and Cervantes and his manservant don make-up and costumes, transforming themselves into Don Quixote and Sancho Panza. They then play out the story with the prisoners taking the roles of other characters. 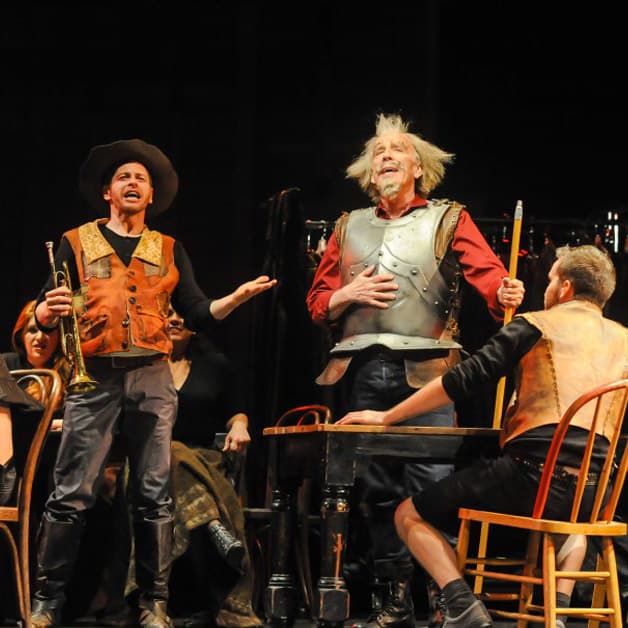 Cervantes, as Don Quixote, a spindly and awkward figure, with his squire, the rotund bumpkin, Sancho Panza, ride forth to do battle with evil-doers in the name of chivalry.  As they ride along the plains of La Mancha on their spavined nags, they spy a windmill in the distance and battle the “Great Enchanter.”

As they ride along, the knight errant discusses with his faithful servant the importance of struggling against evil and restoring chivalry. Having seen a castle—actually an inn—in the distance, the pair proceeds to find lodging there.

In the courtyard of the inn, the serving maid, Aldonza, is propositioned by a rough gang of muleteers.  Don Quixote asks for chambers but grumbles that there are no dwarfs to welcome them. The innkeeper humors him because Quixote appears to be a gentleman. Don Quixote addresses the muleteers as Lords and Ladies, which causes much laughter, but he takes no offense as his attention has been captured by Aldonza; he immediately calls her his Lady “Dulcinea.” Aldonza is confused and angered by Quixote’s refusal to see her as she really is.

The padre and Dr. Carrasco arrive at the inn and are frustrated by Quixote’s lunatic logic. They are interrupted by the arrival of an itinerant barber, and Quixote confiscates his shaving basin, believing it is the “Golden Helmet” of Mambrino and requests the innkeeper to knight him. Aldonza challenges him about his aberrant behavior and Quixote answers with his quest for “The Impossible Dream.”

Aldonza has been swept up in Don Quixote’s idealism but is brought swiftly back to earth when the muleteers savagely beat and ravage her. Unaware of what has happened to his Lady, Dulcinea, Quixote and Sancho to depart from the inn in search of more adventures. To their great misfortune, they are set upon by a gang of Gypsies and, bereft of their possessions, are forced to return to the inn.

Aldonza sings her rejection and disillusionment of the Don Quixote credo while the Knight of the Mirrors defeats Quixote in a fight, revealing the idealistic knight to be “naught but an aging fool.” The knight reveals himself as Dr. Carrasco, sent by Quixote’s family to bring him to his senses.

Now at home, the deluded Don Quixote lies dying.  Aldonza, having followed, breaks into his chamber and pleads with him to restore the dream.  He rises gamely to reaffirm his quest and then collapses. When Sancho addresses her as Aldonza, she declares that her name is Dulcinea.

Back in the dungeon, Cervantes’ tale of the gallant knight has deeply impacted his fellow prisoners, and they return his precious manuscript. Now the jailers of the Inquisition summon Cervantes and Sancho to face yet another trial, this one with the Inquisition. Left behind, the remaining prisoners sing “The Impossible Dream.”