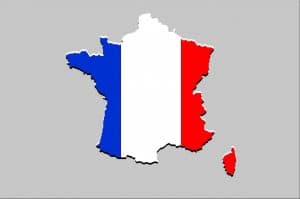 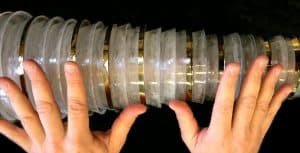 Take one of your finest crystal glasses – or borrow one from a friend!  Wet your finger, and gently rub it around the rim of the glass: that is the sound of the Glass Harmonica. If you fill your glasses with various amounts of water, you’ll get different pitches. And having done that you can blind your friends with the term “hydrodaktulopsychciharmonica,” which is Greek for “dipping your fingers in water and making sounds” Try it at the next dinner party to which you are invited – though you run the risk of not being invited back. But you could always plead you were trying to recreate the sound Donizetti wanted for the “Mad Scene” of his Lucia di Lammermoor, and, if your hosts were subscribers to Utah Opera, they’d forgive you, and invite you back for encore performances!
Because it seems that Donizetti really did intend to use this weird instrument to accompany his mad Lucia. As early as 1638, Galileo mentions this phenomenon (as described above) in his long-windedly titled “Discourses and Mathematical Demonstrations Relating to Two New Sciences.”  Google tells me that it was an Irishman who was the first to turn variously-filled glasses into a musical instrument – why am I not surprised, given that we Irish are known for our drinking and our musicality! A fire in his room destroyed him and his apparatus – perhaps there was not enough water in the glasses to quench the fire? But it was America’s own Benjamin Franklin who developed a mechanical version of the thing. He had heard a performance of water-filled wine glasses in May, 1761, and wondered if there might not be a better way to play the instrument. Two years later he came up with an instrument that had 37 glass bowls of various sizes, mounted horizontally on an iron spindle, turned by a foot treadle, which would rotate the bowls through a trough of water. Mozart wrote for the instrument, as did Beethoven and a number of 19th-century composers. Camille Saint-Saëns wanted it in his Carnival des Animaux (though when I was one of the pianists for performances in Virginia, the part was played on a celeste, its usual substitute); and Richard Strauss asked for it in his 1917 opera Die Frau ohne Schatten.
Certainly the eerie sound of the Glass Harmonica would have been the perfect musical illustration of the state of Lucia’s mad mind, but we’re not sure why Donizetti abandoned his idea to use the instrument for her Act 3 aria: perhaps there wasn’t anyone in Naples who could play it with any proficiency (and  would there be adequate players in other cities?); but it may also have been because his realization that  its sound would probably not have been heard in a space as large as the auditorium of an opera house.  Listen to the Sills recording, which uses the instrument: its sound is almost too delicate even for a studio-made recording.
In 1929 the sixteen-year-old Bruno Hoffmann (he died in 1991) designed and built his own version of the instrument, rediscovered the music written for it during its eighteenth- and early nineteenth-century heyday:  transcribing and adapting the scores for his “glass harp,” and commissioning composers to write for it. At least one recording he made for the Turnabout label can be heard on Youtube.  In 1984 Gerhard Finkenbeiner came up with a redesigned version of Franklin’s 1763 model, and his company still produces versions of these instruments. “Cristal de Baschet” is a French version of the instrument.
Researching this article I came across the name Dennis James, who has recorded an album of “Glass Music.”  His name rang a bell. Turned out he was the organist at the Ohio Theatre in Columbus, Ohio when I lived there as a graduate student at OSU and later as a free-lance musician. The Symphony played there, as did the Opera Company. But, during the summer months, classic movies were screened there on Sundays, and for half-an-hour before show-time Dennis played the Theatre’s organ – one of those grand old instruments that had, literally, bells and whistles. Come movie-time he sank into the depths of the bowels of below-stage, only to rise again during the intermission. We sang along to the songs we knew, booed the on-screen villains and cheered when Joan Fontaine, in Rebecca,  told Mrs. Danvers “I am Mrs. Danvers!” Good times! Oh, and by the way, James plays some of these glass instruments in the movie scores for The Minus Man and The Faculty, if they mean anything to you – they don’t to me!
THE CADENZA IN LUCIA’S “MAD SCENE” 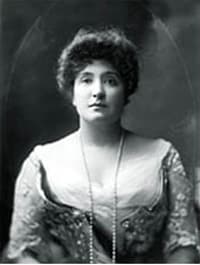