The Brides of Lammermoor

Who knew that there were six and a half operatic adaptations of Sir Walter Scott’s The Bride of Lammermoor before Donizetti’s Lucia di Lammermoor was premiered in 1835? (The “half” derives from the revisions Luigi Rieschi made to his score twenty-three years after its original performances in 1831.) “Learn of the wise…,” says Touchstone to Corin in Shakespeare’s As You Like It, “…and perpend.”  I learned about these earlier versions from the wise Jerome Mitchell, whose The Walter Scott Operas was published in 1977.  Not only did I learn, but I perpended. Herewith the results of my perpendation.

Eight years after Walter Scott’s The Bride of Lammermoor was published, a musical adaptation of it was produced in, of all places, Paris, in 1827. This, if you think about it, means that Scott’s novel had been translated into French soon after its publication, and was such a success that something called Le Caleb de Walter Scott, a “comédie…mêlée de couplets” (a comedy…mixed with songs) could be given at the Théâtre des Nouveautés. There was spoken dialogue with music mostly by Adolphe Adam (1758-1848), who is known to us as the composer of Oh Holy Night; the ballet Giselle; and the tenor aria (which traditionally demands a high D in the final refrain) from his opéra-comique Le postillion de Longjumeau.  But the score stole (one author wrote “borrowed”!) from various other composers then popular in Paris.  Rossini is the best-known of them. François-Adrien Boieldieu (another “borrowed” compser) is not a name that today comes trippingly off the tongue; I found it interesting, in this ‘Operas from Scott’ context, to learn that his successful opéra-comique La dame blanche, was based not just on one Walter Scott novel, but on bits of five of them! The other composer whose music was borrowed/stolen for this mélange is Étienne Méhul, totally unknown to us today.
But who, I hear you ask, is this Caleb, and what does he have to do with Lucy, or with Lammermoor, and why would he be the hero of some kind of musical version of Scott’s The Bride of Lammermoor? Re-reading the novel in preparation for these various Lucia essays I must confess that I found this ancient butler to the impoverished Ravenswood family to be very tiresome, and had to wonder why Scott allowed him to dominate the first hundred pages or so of his novel. Perhaps local color (since his dialogue has Scottish inflections), or some sort of comedic relief (though his function in Scott is not at all the “smart/funny servant” so familiar to us from Mozart’s Figaro, and Rossini’s Barbiere)? The main thrust of Scott’s novel – the love between Lucy and Edgar and its tragic consequences – is relegated to “sub-plot” status. Nobody dies! Nobody goes mad!! Bah, humbug!!!! Let’s just acknowledge that this piece exists, and move on.

Two years later, also in Paris, but this time at the more respectable Théâtre Italien, Michele Carafa’s  Le nozze di Lammermoor was given its first performance. Born in Naples in 1787, Michele was the second son of Giovanni Carafa, Prince of Colobrano and Duke of Alvito; which probably accounts for the litany of names he was given at his baptism: Michele Enrico Francesco Vincenzo Aloisio Paolo Carafa de Colobrano; he died in Paris in 1872. His first opera was composed when he was all of 15 years old, though it wasn’t staged until 1805 in Naples; another opera was produced that same year, also in Naples. The following year his third opera was produced in Paris. Royalty-induced military service interrupted his composing for eight years, but then came a spate of scores for various theatres in Naples; for La Scala in Milan; and for La Fenice in Venice: respectable theatres all!  In 1822 he began studies in France with Luigi Cherubino, an Italian composer who had settled in Paris in 1785 and had managed to survive the Revolution. From 1840 – 1858 Carafa was Professor of Counterpoint at the Paris Conservatoire. Of his 39 operas, all but one was written for Italian or Parisian theatres; that exception was in 1823, at Vienna’s Kärtnerthortheater.
Giuseppe Luigi Balocchi’s libretto for Le nozze di Lammermoor manages to include much more of Scott’s novel than the adaptations made for either Rieschi or Donizetti; the result, though, is more cluttered than either of those. Obviously Edgardo and Lucia are there; so are Lord William Ashton, and his Lady wife: Lucia’s parents. Bucklaw is given, for some reason, the title of “Colonel”; both Ashton sons, Sholto (oldest) and Henry (youngest), are eliminated. Also in his cast are Caleb, the old Ravenscroft butler; Misia, another Ravenscroft servant who may be Caleb’s wife: Scott isn’t clear about this; Bidebent, a Presbyterian minister; Donaldo is Lord William’s secretary; while Elisa is Lucia’s companion. Balocchi’s major alteration to Scott comes in the final scene: a meeting between Lucia; her mother, Lady Ashton; Edgardo; and Bidebent. Though Lucia and Bucklaw have just signed the wedding-agreement, Edgardo produces an earlier signed promise between him and Lucia. She confesses she has taken poison and her last wish is that Edgardo and Arturo should live in peace. Edgardo stabs himself, and the curtain falls. Youtube has sound recordings of a Quintet from Act 1, Scene 2; and an aria for Lucia from Act 2, Scene 2, sung by Joyce di Donato.

In Trieste, in the autumn of 1831, La Fidanzata di Lammermoor by Luigi Rieschi (1799 – 1880), was first performed. The libretto was by Calisto Bassi. This same libretto, though with the title changed to Ida, was set by Giuseppe Bornaccini (1802 – 1881) for a production in Venice in 1833; and as if that were not complicated enough, Rieschi’s 1831 score was revised in 1854 for Milan’s Teatro Carcano as Ida di Danimarca. Bassi, I would note in a footnote (if we had such a thing!) wrote a number of original librettos for a variety of second-tier Italian composers – the Giuseppes Mercadante and Pacini being the best of them – but his more lasting, if anonymous, fame comes from his translations into Italian of French librettos for productions in his native country: Meyerbeer’s Les Huguenots and Le Prophète;  Rossini’s Guillaume Tell; Donizetti’s La fille du Régiment and La favorite; and Verdi’s Jérusalem, which was a revision/re-write-when-necessary of his I Lombardi alla prima crociata, with a newly-written French libretto. Bassi’s cast has four major roles: Ida (Scott’s Lucy); Guglielmo Ashton (her father); Edgardo; and Lord Hayston di Bucklaw (be interesting to know how the Italians dealt with that mouthful!); and two subsidiary ones: Gualtiero (a friend to Guglielmo); and Alina (a friend to Ida); there is, of course, a chorus. There are 3 acts. Bassi eliminates Edgardo’s saving the lives of father and daughter with his killing of the attacking bull, which, in Scott, brings about the meeting of hero and heroine. Guglielmo acquires much of Lady Ashton’s hatred of Edgardo’s family. He is a thorough operatic villain, determined that Ida will marry Bucklaw, even if it should kill her: exacting revenge on Edgardo’s family is paramount. Bassi does have the lovers plighting their troth by breaking a coin in two and sharing each half. Edgardo does go into exile, and does return at the moment Ida is about to sign the marriage contract with Bucklaw. The wedding celebration is interrupted by the appearance of Ida holding the bloody dagger with which she has killed her husband; and it is clear that she has gone mad.  Edgardo enters. Grasping the situation, he blames Guglielmo for the turn of events. Ida confesses to having taken poison; dying, she begs her father and Edgardo to live in peace, which we must presume they do, since Edgardo is still alive at the opera’s end. But we are given Ida’s murder of her husband, her subsequent Mad Scene, and death.

The setting of Ida di Danimarca, the 1854 revision for Milan’s Teatro Carcano, is moved from Scotland to Denmark (as the title suggests). Some of the characters’ names have been given an Italo-Danish flavor: Ida; Gustavo Jutland (Guglielmo Ashton); Olvardo, sere di Nordemberg (Edgardo); Arturo, conte di Alsen (Bucklaw); Roggiero (Gualtiero); and Alvina (Alina). There are four acts.

The most intriguing of the various versions of Scott’s novel must surely be Bruden fra Lammermoor produced in Copenhagen on May 5, 1832. The music is by Ivar Frederik Bredal (1800 – 1864) who quotes three real Scottish folk-songs in the score – one of them notated as a traditional singer might have performed it. The libretto is by none other than Hans Christian Andersen (yes, the same guy who wrote such beloved fairy tales as “The Snow Queen”; “Thumbelina”; “The Princess and the Pea”; and “The Little Mermaid”). Like Mozart’s Zauberflöte and Beethoven’s Fidelio, it’s a piece in which musical numbers are separated by spoken dialogue. According to Joseph Mitchell, it was initially well-received, but was never revived; nor was it produced outside Denmark; and although some of the musical numbers were published, the orchestral score remains in manuscript. Andersen’s script contains far more of Scott’s novel than any other operatic version: with dialogue, much more information can be given, since sung text moves more slowly than spoken words. He even manages to include two-thirds of Scott’s version of Shakespeare’s “weird sisters” in Macbeth: Annie and Ailsie, who sing a “Witches’ Song” immediately after the opening chorus of hunters and, after a reprise of the hunters’ chorus, talk about the Ravenswoods and their recent problems. By the way, the names of the characters seem not to have been Danish-ized (as they were in Ida di Danimarca), with the exception of Lucie’s younger brother, Henrik. The “weird sisters” reappear in the second scene, set in the local village pub, where Bucklaw and his buddy are discussing Ravenswood. They tell of Edgar’s saving the lives of Ashton and his daughter by killing the wild bull that was attacking them; they follow that with the story of the haunted, and, for the Ravenswoods, cursed fountain; and then launch into the prophecy concerning the end of the Ravenswood family line. 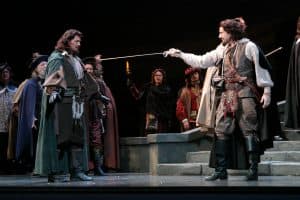 Act 2 begins with a scene in which it is made clear why Bucklaw is such a promising prospect for the Ashtons: he inherits a relative’s vast wealth. We move to Wolf’s Crag, Edgar’s last-remaining residence, where the lovers exchange rings. In Ravenswood Castle, at the start of Act 3, Edgar remembers happier times spent there; he is introduced to Lucie’s younger brother Henrik. There are a few “fake-folk” dances here, which are interrupted by the return of Lady Ashton who is determined her daughter will marry Bucklaw and gives her servants a letter demanding that Edgar immediately leave – a wonderful moment in the novel! The wedding, Lady Ashton decides, shall take place that very night. And, in the first scene of Act 4, it is happening off-stage, while those two “weird sisters” sing and talk about the bride – another great scene in Scott! We move inside where the contract between Lucie and Bucklaw is to be signed. As she signs, Edgar bursts into the room, and instead of a wonderfully operatic ensemble, there is a dialogue scene during which everyone exits, leaving on stage only Lucie; Edgar; Lady Ashton; and the Minister BidetheBent – as in Scott. And, as in Scott, Lady Ashton clips from Lucy the ribbon that holds her half of the ring. Edgar sings an aria and leaves. Lucie faints. Everyone returns, now concerned with the duel which must ensue between Edgar and Bucklaw. Lucie revives, but it is obvious her mind has gone: we hear (or we would hear, if the piece were ever revived) fragments, some spoken, some sung, of her past. Bucklaw re-enters to tell of the death of Edgar in the quick-sands at the river Kelpie; Lucie cries out “Edgar” and dies. Everyone is, of course horror-struck; but then those “weird sisters” come forward to remind us that the prophecy surrounding the Ravenswood family has been fulfilled, and the curtain falls.