Bohème and its Reception: Audiences vs Critics

Puccini’s La Bohème was premiered at the Teatro Regio in Turin on February 1, 1896, with Arturo Toscanini at the baton. The opera is drawn from Scènes de la vie de bohème, a novelized collection of stories by the Parisian author and poet Henri Murger in the mid-1840s that was also the basis for the 1849 stage version co-written by Murger and Théodore Barrière. The initial audience and critical response to the opera was varied, but it quickly became popular around Italy and it was produced around Europe, the U.S.A., and South America within a few years. Currently, it is one of the most-often produced operas in the repertoire. As popular as the opera has been with audiences, music critics and other composers sometimes find it lacking in sophistication and complexity, and Benjamin Britten famously wrote in 1951 that “after four or five performances [he] never wanted to hear it again” and that he “became sickened by the cheapness and emptiness of the music.”  Of course, this sort of critical reception is not particularly unique to La Bohème; there are many examples of music, art, literature, and other entertainment that have enjoyed wide popularity while being vehemently excoriated by critics. In 1912 the Italian musicologist Fausto Torrefranca published Puccini e l’opera internazionale, a book-length excoriation of Puccini and other modern composers who represented for the author the “decadence of today’s Italian music…its cynical commercialism, its lamentable impotence, [and] its celebration of the international vogue.”

Torrefranca’s negative evaluation does, however, give an entry into some of the aspects of Puccini’s musical language that could have invited such invective. The mention of Puccini’s “celebration of the international vogue” is particularly telling, even underneath its latent nationalistic sentiment. Puccini was indeed constantly attempting to keep his music informed by the latest styles, which is sometimes a dangerous line to toe for a composer. It can create a sense of self-contradiction, particularly for someone like Puccini whose musical frames of reference lay firmly with the styles of the 19th century.  For more conservative segments of the public, indulging modern sounds feels like a sellout, caving to the trend of the moment rather than attempting to write lasting and profound music. For those composers who are at the artistic vanguard, who at this time would have been folks like Stravinsky, Debussy, Strauss, and the nascent Second Viennese School, such interest in new musical currents can seem like novelty-seeking.

Two particular moments in the score that help to illustrate this are the openings of the second and third acts. Both of these passages have been commented on by critics, both favorably and unfavorably. The second act opens with a brass fanfare (a motif for the Latin Quarter) harmonized in root position triads that move in step-wise parallel motion, while the third act opens with a moody open fifth drone in the low strings with a light melody above that is harmonized in open fifths. Anyone in an undergraduate voice-leading class who wrote something like this would receive their assignment back covered in red ink. Parallel fifths in particular are like a red rag to a bull for undergraduate theory professors. While the traditionalists might find themselves unnerved or even offended by such things, these sorts of harmonic devices could also be seen as innovative and forward-looking. After all, the late-19th and early 20th-century compositions of Claude Debussy especially were exploring the possibilities of these sorts of parallel motions. Yet from this alternative angle it could easily be argued that Puccini didn’t go far enough. While Debussy and Stravinsky were assembling new kinds of harmonic systems based on these expanded harmonies, Puccini seems to be merely using them for momentary dramatic effects.  Indeed, compared to the harmonic ambiguity of Debussy’s contemporaneous works, or even Wagner’s more chromatic moments, these passages from Bohème seem almost quaint.

Those who admire Puccini also find themselves defending aspects of his music that are somewhat hard to quantify, particularly his melodies and his orchestrations. While the discipline of musical analysis has an extensive and well-developed vocabulary for discussing specifics of harmony and counterpoint, both in terms of large-scale structures and atomized moments, melody and orchestration have no such discourse. The study of orchestration in particular is one of timbre and tone color, aspects of music and sound that are notoriously hard to quantify or even discuss without resorting to metaphors. Further, demonstrating the logic or musical coherence of a particular melody often says little about why the melody is effective or memorable. Things like melodic beauty and orchestral detail are of course far from insignificant, but they create numerous challenges for musical analysts if they are particularly important to understanding the aesthetic of a particular composer. To echo Foucault, in this case the discourse of the discipline of musical analysis has historically privileged harmony and counterpoint, so it follows that it also privileges music which engages harmony and counterpoint in sophisticated and novel ways. Music that focuses on other paths will necessarily have a hard time being taken seriously.

In addition to harmony and counterpoint, musical analysis has also tended to prize motivic unity, economy, and organic coherence, and indeed many of the stalwarts of the classical repertoire from Bach to Beethoven to Wagner exhibit this in spades. Perhaps nothing more tickles the “analysis” bone more than a composer who manages to spin out entire musical worlds from a single musical germ, as in works like Bach’s fugues or Beethoven’s 5th Symphony. Indeed, works like Bach’s Kunst der Fugue or the intense harmonic organization of 20th century serialist pieces like Webern’s Op. 21 and Op. 30 take this idea to its logical conclusion in which everything is derived from a single motivic seed. In the world of opera, Wagner looms large over this sphere as well, as his music dramas contain both motivic coherence in the use of leitmotifs and innovative harmonic concepts, as in Tristan und Isolde where he sets up a tonal ambiguity in the first measure and doesn’t resolve it for about four hours. Wagner’s concept of Gesamtkunstwerk itself is guided by this impulse to tie all aspects of the drama to a single unified purpose. 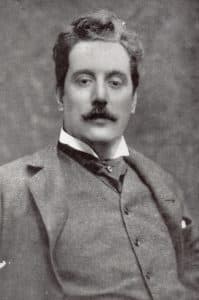 Here too Puccini finds himself in a bit of a no-man’s land in that his music often seems to straddle the divide between the set pieces of the Italian tradition of Rossini and Verdi and through-composed Wagnerian drama (which also testifies to the internationalism of opera by the time that Puccini was writing). The melodic focus of Puccini is in keeping with the Italian tradition, but he also relies on the orchestra to help give the drama coherence and to associate particular characters with themes and motifs. However, Puccini’s themes are longer and less amenable to the kinds of transformations and combinations that are the hallmark of Wagnerian leitmotif. So by this measure Puccini’s use of motives to provide unity falls short as well, although it is worth considering that in La Bohème the lack of a fully realized leitmotivic kind of system allows for some particularly effective moments. For example, the full call-back of “Mi chiamano Mimì” in the final scene is much more poignant and striking than it would have been if the entire theme had always accompanied Mimì throughout the opera.

In spite of these critiques, La Bohème became steadfastly popular across Europe and the United States, due in no small part to tours featuring the soprano Nellie Melba and the tenor Enrico Caruso. La Bohème’s popularity around the turn of the century also enmeshed it with the early history of commercial recordings, which certainly only added to its reach and popularity. Indeed, Italian opera in general was a popular genre for early recordings because arias could be accommodated by the limited recording time available. Further, they could be performed with a reduced orchestra or just a piano to good effect. Among the first commercial recordings from La Bohème was an Edison cylinder released in 1901 with the tenor Oreste Mieli singing “Quest’ e Mimì, gaia fioraia.” In 1901 and 1902 almost two dozen gramophone discs of arias from Bohème were released by the New Jersey record label Zon-O-Phone before a series of patent lawsuits with Emile Berliner (the inventor of the lateral-groove disc record) closed the company and folded its catalog into the Victor Talking Machine Company. The famous tenor Enrico Caruso first recorded Bohème’s “Che gelida manina” for the Victor Talking Company in February 1906. The first commercial recording of the full opera appears to have been a 1917 edition recorded by the La Scala Orchestra and released as a set of 12 78rpm discs by the Italian imprint of His Master’s Voice, “La Voce del Padrone.”  The 1946 RCA Victor recording with conductor Arturo Toscanini is also the only recording of a Puccini opera done by its original conductor.

Beyond La Bohème, Puccini’s other operas have also enjoyed enduring popularity among operagoers even as musicologists and music critics have tended to diminish or ignore them. In this respect, Puccini is something of a test case for the divorce between the “serious” classical music that has been deemed worthy of academic study and over the course of the nineteenth and twentieth centuries and the music that is actually regularly performed. Of course, no amount of scorn on the part of historians, critics, and other composers is going to dislodge Puccini’s operas from their positions as some of the most beloved in the operatic repertoire. Scholarly interest has picked up in the last few decades as well.