Fighting Off Dilution By Repetition

Shakespeare. Does any person of western letters cast a shadow as long as The Bard? Homer might come close. Dante too. Not to mention Chaucer, Herodotus, Dostoyevsky, Plato, Stowe, Marx…the list of contenders is as impressive as it is subjective but, let’s be honest, they are all really just jockeying for second place. No writer has ever captured the breadth of human experience quite like Shakespeare, and from his vantage as the keenest possible observer of his time, he managed to draw the map of ours. Shakespeare didn’t merely comment on culture, he created it. 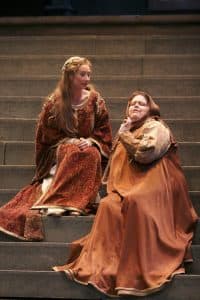 This realization brings us hard upon the matter of influence and the ways in which new art continues to memorialize his contributions. Opera was one of the earliest and most logical vectors for this tendency toward homage. And why not? What is opera if not music in search of suitable words? The debate over who had the best words was long settled by the time opera started to look like something we might recognize today. Writing stage music based on Shakespeare was a perfect extension of the practice of providing incidental music for traditional productions of his work and the first examples of these operatic conceptions began showing up later in the 17th century with works by Purcell and others.

Right from the start, the perils of adaptation were apparent. Librettists made cuts, changes, additions and other artistic sacrifices to fit the plays into a new set of constraints. The results were not all well-received. Rossini’s Otello (1816) placed Desdemona in the spotlight and though this met with some criticism, it highlighted a significant change in the performance practices of the 19th-century. Shakespeare’s female roles (played by men until the 1660s, well after his death) were notoriously under-written and, as a result, not well-suited to the emerging reality of the soprano role as a key to success in Romantic opera. Clearly, Shakespearean women needed an upgrade if his texts were to have an ongoing life in opera and Romeo and Juliet provided a perfect opportunity.

Over 20 versions have been created to date, with Charles Gounod’s 1867 treatment still standing among the tallest. Apart from the then common choice of re-awakening Juliet for a duet before the famous double death, Gounod and his librettists left Shakespeare’s basic plot alone but the same cannot be said for the countless adaptations that have followed, especially those depicted on film. This is no great crime, of course. Shakespeare himself was using older material to tell this tale (Arthur Brooke’s Tragicall Historye of Romeus and Juliet from 1562) but some of the more contemporary renditions have gone pretty far afield. So how does a 400-year-old piece of art retain its original potency after so many liberal iterations? How many strange, faux-Juliets can we absorb before she disappears entirely?

Leaving the obvious aside for just a moment (West Side Story needs no introduction here), there have been many big-screen attempts at this story, dating from as far back as 1900. The movie Juliets are seemingly legion, with Sandra Dee (Ustinov’s Romanoff and Juliet, 1961), Olivia Hussey (Zeffirelli, 1968), Claire Daines (Luhrmann’s Romeo + Juliet, 1996) and Hailee Steinfeld (Carlei, 2013) representing only a small portion of the list alongside Natalie Wood’s Maria (1961). The directors of each of these films took distinct liberties with the setting, language and plot in ways that made artistic and cinematic sense to them, but others have ventured into truly bizarre territory. Consider the animated Romie-0 and Julie-8 of 1979 which cast the protagonists as robots. What about the incredibly odd punk/comedy setting of Tromeo and Juliet from 1996? Have you seen Romeo.Juliet (1990) which featured John Hurt as an “eccentric bag-lady” who served as the film’s only human character amidst a pack of stray cats? Let’s not forget the martial-arts version Romeo Must Die (2000) or the hip-hop version Rome & Jewel (2006) or the cartoon version Gnomeo and Juliet (2011) or the…you get the point. 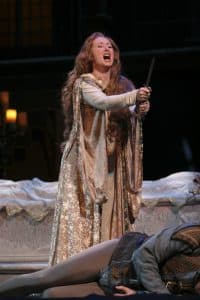 It’s hard to imagine a dramatic creation, by Shakespeare or anyone else, that has received a more thorough set of transformations than Romeo and Juliet. At least they all had a Juliet (or at least a Julie-8) and, we assume, intended to do some justice to her first form. But whether or not they, or any future visionaries, achieve an appropriate level of tribute depends largely on us and our ability to recall the words Shakespeare wrote back in 1597. Those ancient phrases matter, if for no other reason than to show us how timeless concepts like star-crossed love really are. Truly, in this case, no modern spin on Juliet and her cohort has proven more effective than the source material because the predictive quality of Shakespeare’s genius has always carried more weight than its vernacular echoes.

I recall a relevant bit dialogue from a 1990s sitcom in which a teenager was telling her parents about studying Romeo and Juliet in school. When they asked her what she thought of it she remarked that it was a cheap rip-off of West Side Story. It’s a funny line, but it highlights how easy it can be to take something precious and, through either adoration or impertinence, adapt it right out of meaningful context. Lucky for those us of here tonight, Gounod tells it straight and you will recognize his Juliet as the one we know best. Did I mention that Dorothy Hamill played her in Romeo and Juliet on Ice back in 1983?

Jeff Counts is Vice President of Operations and General Manager of Utah Symphony. He was program annotator for Utah Symphony from 2010 to 2014 and has been writing articles for Utah Opera for over 8 years.