Silent Night Program Article by Michael CliveSynopsis of the Opera

The declaration of war is announced. At a Berlin opera house, the announcement interrupts the lives of opera singers Anna Sørensen and Nikolaus Sprink; in a small church in Scotland, it inspires dreams of heroism in William, who demands that his younger brother, Jonathan, enlist with him. Their priest, Father Palmer, looks on. In a Paris apartment, Madeleine Audebert protests that her husband is leaving while she is pregnant with their first child. Amid the fervor of nationalistic songs, men prepare to go to war.

Battle is engaged between German, French, and Scottish forces. An attempt to infiltrate the German bunker by French and Scottish soldiers fails. In the heat of battle, Nikolaus stabs a man to death, then despairs at the growing violence. William is shot, and Jonathan is forced to leave him behind.

After the battle, Lieutenant Gordon assesses the Scottish casualties and Father Palmer attempts to offer solace to Jonathan. In his makeshift office in the French bunker, Lieutenant Audebert discovers his father, a French general, waiting. He reprimands Audebert for the retreat, and threatens him with a transfer. The general leaves and Audebert laments the loss of his wife’s photograph. When alone, Audebert counts the French casualties. Missing Madeleine and their child, he sings of his fatigue. As it starts to snow, the soldiers slowly fall asleep. Alone in the German bunker, Nikolaus reveals his despair to the remembered Anna. 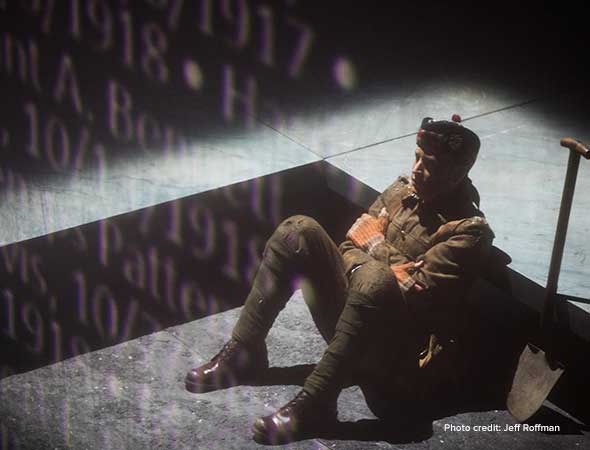 In the German bunker, crates of Christmas fare arrive along with little Christmas trees from the Kronprinz. Lieutenant Horstmayer criticizes the Kronprinz for not sending them more useful presents, like ammunition and reinforcements. He receives a directive from headquarters that Nikolaus is ordered to sing for the Kronprinz at a nearby chalet, where he will join another opera star, Anna Sørensen. Nikolaus departs for the chalet. The French soldiers receive crates of wine, bread, and chocolates from the quartermaster, opening them jubilantly. Aide-de-camp Ponchel, a barber, brings coffee to Audebert and sits him down for a haircut. Ponchel recalls morning coffee with his mother, who lives only an hour away by foot. He carries an alarm clock next to his heart, set to remind him of their daily breakfast. In the Scottish bunker, crates of whiskey arrive from home and Jonathan writes a letter to his mother. He does not mention his brother’s death.

At the chalet, Anna and Nikolaus perform for the Kronprinz. Following the performance, they steal a few moments together, and Anna notices the war’s toll on her lover. She has arranged for Nikolaus to spend the night with her and is angry when he tells her that he must return to his fellow soldiers. She vows to accompany him back to the battlefield.

In the French bunker, Gueusselin volunteers to infiltrate the German bunker, and with several grenades, begins to cross no man’s land. The Scottish soldiers drink whiskey and play a bagpipe sent by another unit. Father Palmer sings a ballad about the nearness of home, and when men in other bunkers hear it, they react with sadness, caution, and annoyance. Nikolaus returns; his fellow soldiers greet him with cheers and applause and gasp in amazement when they see Anna. When the song in the Scottish bunker is finished, Nikolaus responds with a rousing Christmas carol. When the bagpiper joins in, Nikolaus is emboldened to stand atop the bunker, raising a Christmas tree as a gesture of friendship. Nikolaus ventures into the center of no man’s land. Eventually, raising white flags, the three lieutenants meet and agree to an unofficial ceasefire, only for Christmas Eve. Slowly and cautiously, the soldiers move from their trenches and meet in no man’s land. They share their Christmas provisions, introduce themselves, and show one another photos. Anna appears and the soldiers are awed by a woman at the front. Father Palmer improvises an altar and celebrates mass, but Jonathan searches for his brother’s body and vows revenge. Father Palmer concludes mass and urges the men to “go in peace” as bombs explode in the distance.

At sunrise, Jonathan tries to bury his brother, but the truce is over. Two German sentries believe he is planting mines, and prepare to shoot him. Father Palmer and Lieutenant Gordon intervene. Horstmayer suggests that it might be best if they bury all of their dead. The three lieutenants meet and decide over coffee that the truce will be extended until after this is accomplished.

The soldiers gather their fallen and Father Palmer delivers last rites. A procession bears the bodies away. Anna looks on and vows that Nikolaus will not suffer the same fate.

News of the unofficial ceasefire has reached headquarters for all three armies. The British Major, the Kronprinz, and the French General all react in anger and disbelief. They declare that their soldiers will be punished for fraternizing with the enemy.

Lieutenant Horstmayer prepares to resume hostilities and Nikolaus berates him for his blind allegiance to the Fatherland, and Horstmayer tells him he is under arrest for insubordination. Anna leads Nikolaus firmly across no man’s land and Horstmayer orders his men to shoot, but no one moves. Reaching the French bunker, Nikolaus asks for asylum for himself and Anna.

The British Major reproaches the Scottish soldiers for participating in an unofficial truce. They are to be transferred to areas on the front where fighting is fiercest. When the major sees a German soldier approaching from the battlefield, he orders him shot. Jonathan complies. Ponchel, who is discovered by Audebert, runs to him.

Returning to his small office, Audebert finds his father waiting. The General tells his son that his unit has been disbanded and he will be transferred to the fortress at Verdun. Audebert informs his father that he has an infant grandson, Henri.

The Kronprinz informs the German soldiers that they are to be deployed to the Eastern Front. As the soldiers leave, they hum the Scottish ballad that they heard in the bunker on Christmas Eve. The battlefield is left empty. Snow begins to fall.