Peter Brook’s La tragédie de Carmen is an adaptation that includes elements of the Georges Bizet opera as well as the original Prosper Mérimée novella on which Bizet’s opera was based.

Micaëla, a young country girl, arrives in the city looking for her childhood sweetheart, Don José. She brings him a letter from his mother. While on a break from work, Carmen sings a love song that strikes José’s interest.

A commotion breaks out, and José and his commanding officer, Zuniga, are tasked with getting to the bottom of it. Suspecting that Carmen is the instigator, Zuniga orders José to take her to jail. Carmen then promises José that if he lets her escape, she will meet him at the club of her friend Lillas Pastia. José lets Carmen go, whereupon Zuniga demotes him and locks him up.

Lillas Pastia, the club owner, describes his childhood and the state of his usual customers. Carmen arrives at the club with stolen goods. Zuniga shows up and attempts to blackmail Carmen and Lillas Pastia, but they are able to appease him. José finally arrives and Carmen performs for him. When all of a sudden José is called back to work, Carmen is furious, and José acquiesces to her demands that he stay with her. Zuniga returns and a fight breaks out between him and José. In a violent rage, José kills Zuniga. 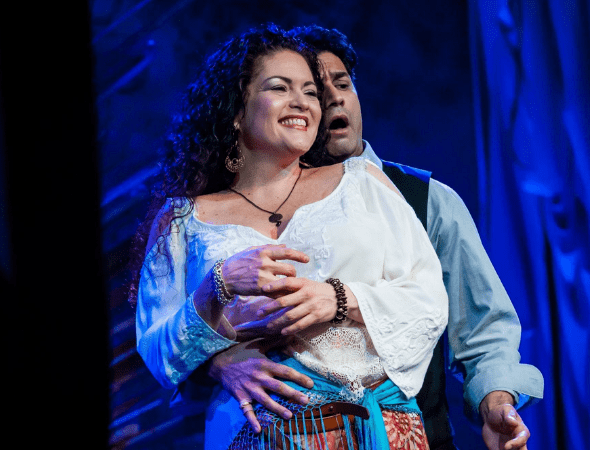 Carmen and José quickly hide the dead body as Escamillo, a famous entertainer, enters. Carmen is immediately taken with him, so José, inflamed with jealousy, picks a fight with Escamillo. Carmen separates them, and Escamillo stands down. He invites them to join him at his next performance and leaves.

José, who has now killed for Carmen, sings of his love for her. They come together in a ceremony uniting them. The joyful occasion is interrupted by Garcia, Carmen’s husband, whom she has failed to mention. The two men challenge each other and the ensuing fight results in Garcia’s death. Carmen, contemplating her own fate, reads her tragic trajectory in the cards.

Micaëla appears, again searching for José, and this time the two women find mutual ground. They sing together while José, now twice a murderer, flees.  Carmen rejects the fugitive José and joins Escamillo. José returns to persuade her to leave with him to start a new life. She knows she is putting her life in jeopardy by saying no, but Carmen refuses José’s offer, determined to the very end to control her own fate.